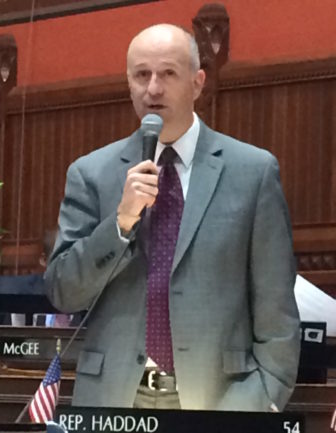 The House of Representatives overwhelmingly approved a bill late Thursday that requires colleges and universities in Connecticut to use a standard of “affirmative consent” when developing policies on sexual assault.

Institutional policies also must include clear statements advising students and employees of the affirmative-consent standard. The measure, which passed 138-7 and now heads to the Senate, only applies to institutional disciplinary matters and not to criminal cases.

“It clarifies that a yes-means-yes policy will be the policy for the state of Connecticut for all public and private colleges,” said Rep. Gregory Haddad, D-Mansfield, who serves on the legislature’s Higher Education Committee and who introduced the bill. “The presence of ‘yes’ is required rather than just the lack of ‘no’ ” in determining consensual sexual activity.

One in five women nationally, and one in 16 men, are assaulted during their college career, Haddad said, adding that while affirmative-consent-based policies are in place at most colleges and universities in Connecticut, they vary considerably in scope.

One in 10 female students at the University of Connecticut’s main campus in Storrs surveyed last winter by a national consortium reported that they had been sexually assaulted since enrolling in school. Among male students, one in 70 reported being victims of sexual violence.

This bill would bring greater uniformity to how all institutions define consensual sexual activity in disciplinary matters, Haddad said.

“This is not a new concept being put forth by the legislature; it is just an opportunity to affirm that this is the new paradigm for sexual contact and sexual activity,” said Rep. Tim LeGeyt, R-Canton, who also serves on the Higher Education Committee and supported the bill.

UConn drew attention two years ago when a group of students filed a lawsuit and a complaint with the U.S. Department of Education’s Office of Civil Rights alleging the university was unresponsive or insufficiently responsive when they came forward after being sexually assaulted or harassed. Protests on campus and public hearings at the state Capitol followed.

The university has since settled that lawsuit for $1.3 million, the complaint was withdrawn and a separate complaint was filed the same day. An investigation by the civil rights office is still underway.

Rep. Melissa Ziobron, R-East Haddam, who opposed the bill, said her 21-year-old daughter, a college student, has had been able to study abroad. “I’ve spent a lot of time over the last several months worried about her and her safety,” she said.

But Ziobron questioned the legislature’s commitment to curbing sexual violence, noting that a new budget proposal for the 2016-17 fiscal year unveiled by the Democratic majority reduced funding for rape crisis and shelter services for domestic violence victims.

“I’m concerned about the message we are actually sending in the state of Connecticut,” she said.

Supporters of the bill also questioned whether the state’s approach to the issue of sexual violence was sufficient.

Rep. Gail Lavielle, R-Wilton, told the story of a constituent wrongfully accused of sexual assault and later exonerated, adding that false claims leave lasting problems for the accused. “There are also those who can be wrongfully accused, and we owe them the same concern, and I hope we will be dealing with it in the future,” she said.

Opposing the bill were six Republicans — Ziobron, Gayle Mulligan of Hebron, Tom O’Dea of New Canaan, John Piscopo of of Thomaston, Rob C. Sampson of Wolcott and Pam Staneski of Milford. The only Democrat was Douglas McCrory of Hartford.