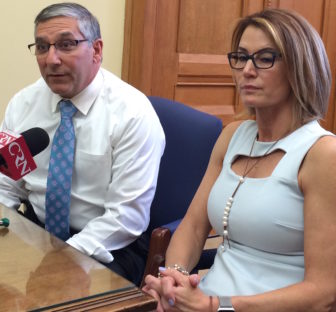 As majority Democratic legislators scrambled in hopes of adopting a new state budget before Wednesday’s midnight deadline, Republicans warned they wouldn’t tolerate a rushed or incomplete debate on solutions to a nearly $1 billion deficit.

“Quite frankly the people of the state of Connecticut need to know what’s in the budget” before it is adopted, Klarides said.

“We are going to understand that budget” before we vote on it, Fasano said.

Both GOP leaders said they would not try to filibuster the budget, keeping the debate going until Wednesday’s deadline hits, but would insist on a full and fair airing.

But while they didn’t identify a specific time Wednesday, they said there is some point when it simply is too late to responsibly debate a plan expected to spend close to $19.7 billion.

“I don’t know what the time is, but there certainly will be one,” Klarides said, adding Republicans expect all of their concerns and questions about the budget to be addressed.

House Democratic leaders kept the House in session last year throughout the second-to-the-last day, overnight, and into the morning of the final day as Sharkey struggled to find the votes to pass a budget.

After the House barely adopted the measure by mid-morning, the Senate didn’t take up the bill until around 7 p.m., and a Republican-dominated debate threatened to run into the midnight deadline.

The budget is going down to the wire again this year. Gov. Dannel P. Malloy and House Speaker J. Brendan Sharkey, D-Hamden, both said late Tuesday that talks had led to “substantial progress.”

Sharkey declined to predict late Tuesday when a budget debate might begin. “I don’t want to characterize how far we are.”

Sources said House Democratic leaders told caucus members in a closed-door meeting late Tuesday that the governor and the Democratic majority nearly had reached a deal on a new budget.

But with the mandatory adjournment deadline just over 24 hours away, Republican leaders said they fear a sloppy budget — including some cost-savings based more on wishful thinking than substantive analysis — will be rushed to a vote on the final day.

“It’s grossly unfair, and every time we do this we end up with a budget that has problems, that are unrealistic,” Fasano said. “Enough’s enough.”

Despite growing deficit forecasts, last year’s plan promised major new investments in transportation and a sales-tax-revenue sharing plan with cities and towns. The new budget  is expected to scale both initiatives back dramatically.

“They are going to stand up there, and they’re going to pound their chests. They’re going to say how great this is,” Klarides said, adding that Democratic legislators and Malloy did just that one year ago. “It’s an embarrassment, quite frankly.”

Democratic legislators also have said that the alternative budget Republicans have proposed this year is not without its question marks.

Democratic legislators and state Treasurer Denise L. Nappier have raised concerns about a Republican plan to cap borrowing next fiscal year about $800 million to $1 billion below the level of this fiscal year and last.

Nappier said she doubts this would save the nearly $70 million in annual debt payments the GOP projects, and also could cause significant cash flow problems, interfering with the state’s ability to pay its bills on time.