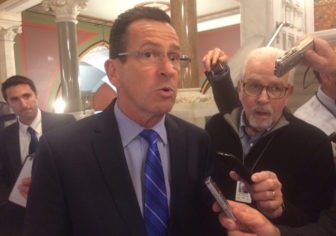 Gov. Dannel P. Malloy is surrounded by reporters after emerging from budget talks with legislative leaders.

And with less than 29 hours remaining in the regular session at the moment Malloy emerged from the meeting at 7:20 p.m., legislative leaders acknowledged privately that a special session was all but assured.

Even if an appropriations bill for the fiscal year beginning July 1 clears the House and Senate before Wednesday’s midnight deadline, the chance of passing several omnibus policy bills to implement the new budget as well as a capital bonding package, all before the deadline, is highly unlikely, legislative sources said.

“We made substantial progress and I think everybody has to catch their breath,” Malloy said, adding that, “we have to run some numbers,” but administration officials remain in contact with the Democratic majorities in the House and Senate.

The administration has been pressing Democrats since the two sides resumed talks Monday to reduce their reliance on more than $200 million in temporary revenues and other one-time solutions to balance the next budget, sources close to both sides of the negotiations told The Mirror.

Malloy declined to speculate on whether the General Assembly would have time to adopt the core budget bill, an appropriations and revenue measure, before midnight Wednesday.

“I don’t know the legislative function,” the governor said. “That’s up to other people how they do their business, I’m simply saying we’ve made substantial progress.”

Though the governor wouldn’t discuss specifics of the talks, his administration has been asking lawmakers to focus on more than the $960 million deficit built into 2016-17 finances.

The legislature’s nonpartisan Office of Fiscal Analysis is tracking a shortfall that tops $2.2 billion, or 11 percent of annual operating costs, in the 2017-18 fiscal year.

Both sides agree they won’t raise taxes next fiscal year. And while permanent spending cuts next in 2016-17 also would serve to reduce the bigger shortfall down the road, temporary revenues, fund sweeps and other one-time solutions in the new budget do nothing to whittle the larger gap down.

Though the governor spoke briefly and didn’t break stride for most of his walk from the Senate Democratic Caucus conference room on the third floor of the Capitol to his second-floor office, he did provide one moment of levity.

Malloy stopped quickly — as some reporters walked past him — bent down and picked up a coin off the floor. “When you guys are too important to pick up a penny,” he told reporters, “there’s something wrong.”