Not this year: Financial aid for undocumented students dies 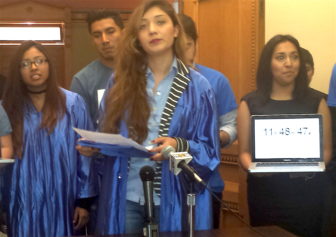 “Dreamers” at the Capitol Wednesday.

Legislation that would make undocumented students eligible to receive financial aid does not have enough votes to pass in the state House of Representatives, the bill’s sponsors say.

“It doesn’t look good for that bill. There are a lot of my colleagues that are telling me, ‘Not this year,'” said state Rep. Roland Lemar, D-New Haven, who was trying to win votes for the bill.

With 76 votes needed to pass it, that means at least 12 of the 87 Democrats in the House are not on board.

The legislation has the support of UConn President Susan Herbst and Regents President Mark Ojakian. It would make undocumented students eligible to apply for aid from the $140 million pool those public college systems collectively provide.

The state Senate last month voted 21 to 13 along mostly partisan lines to approve the bill.

Still hoping for a last-minute vote, supporters of the legislation, who call themselves “Dreamers,” came to the state Capitol wearing caps and gowns and holding a clock counting down the time remaining for legislators to pass the bill.

“Institutional aid will be a dream come true for me,” said Angelica Idravo, an undocumented resident who works two jobs so that she can attend Western Connecticut State University part time. “We will be here fighting to the end. If it doesn’t pass, we will be back next year.” 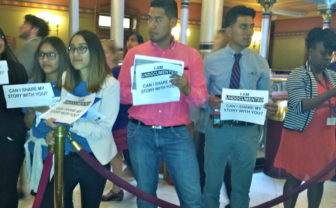 CT Students for a Dream have lobbied at the Capitol daily.

Lemar called it “morally indefensible’ during a press conference Wednesday that financial aid is not available to these students who have lived in the state for years.

“It is morally indefensible that we are going to fail for a second straight year. We will be back next year,” he said.

Opponents said they foresaw crowding some legal residents out of the financial aid pool if undocumented students were given access. Concerns also were raised about the timing of expanding financial aid when state funding is being cut for public colleges and universities.

The state budget expected to be debated today will cut state funding for the Regents system, which includes the 12 community colleges and four regional state universities, by $25.3 million, or 7.1 percent. UConn was cut by $19.1 million, a 7.7 percent reduction.