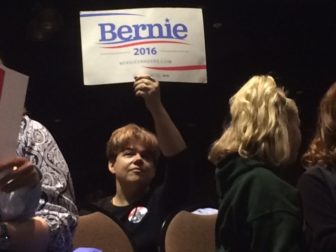 Connecticut Democrats staged a convention geared toward wooing this woman and people like her.

The specter of President Donald J. Trump starred Saturday at the Connecticut Democratic State Convention, a welcome presence to a party with divided presidential loyalties and the challenge of retaining control of the General Assembly in an angry and unsettled political year.

More than 1,000 Democrats gathered at the Connecticut Convention Center in Hartford, ostensibly to nominate U.S. Sen. Richard Blumenthal to a second term, but more urgently to begin closing the rift separating backers of Hillary Clinton and Bernie Sanders.

To no one’s surprise, they believeTrump can help.

Beginning with the mayor of Hartford and ending with Blumenthal, a procession of speakers imagined the billionaire businessman with his hands on nuclear launch codes, making good on threats to deport immigrants, ban Muslims and oppose reproductive rights for women.

Democrats underscored that theme right through the closing benediction. It was delivered by Dr. Mohammed Qureshi, who came to prominence recently with a gesture of grace: reaching out to the man who confessed to firing a rifle at Qureshi’s mosque in Meriden.

Hartford Mayor Luke Bronin, the first to take the stage, said “the Republican standard bearer has no standards,” no idea what has made America great. Trump shrinks whatever differences divide Democrats, he said.

“There is no room for disunity in our party this year,” Bronin said. “There is too much at stake.”

They warned against viewing Trump as unelectable.

“We have a lot of hard work ahead of us. Donald Trump had 3,000 people on their feet in the city of Waterbury just a few weeks ago,” said U.S Rep. Elizabeth Esty of the 5th District. “The threat is real, and the threat is here in Connecticut. We cannot let that man enter the oval office.”

“This is an existential choice for our country with Donald Trump leading the Republican Party,” said U.S. Rep. Joe Courtney of the 2nd District.

Sanders won the 2nd and 5th districts in the Connecticut primary, the state’s two most suburban and rural districts to the east and west of the densely populated I-91 and lower I-95 corridor, where Clinton won in the 1st, 3rd and 4th districts.

In the fight for the 55 delegates at stake in the primary, Clinton’s victory was narrow, 28 to 27. But 15 of the 16 superdelegates from Connecticut who have expressed a preference are committed to Clinton. 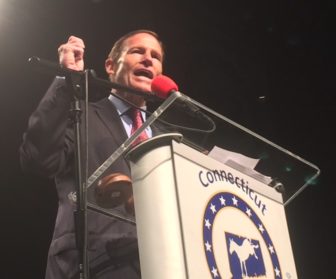 More than a dozen Sanders’ supporters picketed outside, demanding more. The vibe was relaxed, not angry. Denise Weeks greeted arriving delegates, who had a choice of two lanes to enter the parking garage.

“All right! You’re in the left lane,” Weeks said to one driver, who smiled. She reproached those in the opposite. “What are you doing in the right lane? Really!”

Her husband, Luther Weeks, held a Bernie sign, but he acknowledged that Clinton’s advantage among delegates most probably cannot be overcome. The larger fight is for a progressive agenda and a delegate count that reflects Sanders’ support.

“Most of these people, if the choice is Hillary or Trump, will vote for Hillary, but not all of them,” he said. “We want these people involved for a long time.”

Standing a few feet away was Debra Cohen, who shouted, “The revolution is on!”

Cohen does not see Hillary Clinton leading that revolution. She said she was drawn to the Occupy Wall Street movement’s demands for economic justices and was excited to find a like-minded presidential candidate in Sanders.

“I’ve never been involved in a campaign before,” Cohen said. “I’m amazed at my own depth of commitment.”

Cohen is a Sanders voter who may remain beyond the reach of Clinton, even if the alternative is Trump.

The party has larger problems than Sanders. The Democratic-controlled legislature is expected to adopt an austerity budget next week, ruling tax increases off the table. The budget was a source of disappointed chatter among some delegates before the convention opened.

There were a few minor disruptions inside the hall. When Nick Balletto, the state chairman, asked if there were any more nominations for Democratic National Committee, one voice called from the back.

John Olsen was re-elected and Nancy DiNardo, the former state chair, was elected to the Democratic National Committee.

Blumenthal was aware of the sentiment, drawing loud applause near the end of his acceptance speech when he gave a nod to Sanders and those who have been energized by his surprisingly strong candidacy.

“I just want to say a word about my friend and colleague, Bernie Sanders,” he said.

He waited for the applause to subside.

“I’ve been proud to stand shoulder to shoulder with Bernie Sanders on the floor of the Senate for those causes that he has espoused so eloquently across America, and I want to thank him for the great service he’s done enlisting and engaging so much energy.”

Blumenthal, like the rest of the congressional delegation, is a superdelegate to the Democratic National Convention, committed to his Yale law classmate, Clinton, long before the Connecticut primary. He quickly pivoted to a pitch for unity.

“But we know that we have to come together to win this campaign. And we know how to win tough campaigns by coming together, because we’ve done it, and we know we’re going to do it again this year,” Blumenthal said. “And we will have a Democratic president. And I will be proud to be on the ballot with Hillary Clinton this November.”

He was rewarded with applause from an audience of delegates and guests, activists long used to turning pragmatic after primaries are done, people like Martin Dunleavy, who helped run Bill Clinton’s Connecticut campaign in 1992, but volunteered for Sanders in 2016.

Dunleavy would happily press Sanders’ agenda as a delegate in Philadephia, but will vote for Clinton if she is the Democratic nominee. For the near future, at least, people like Debra Cohen still are on the outside, looking for a revolution.