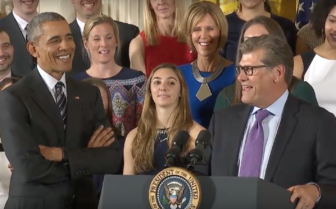 Washington – For the fourth time in four years, President Obama on Tuesday praised the University of Connecticut women’s basketball team for winning the NCAA championship.

“So there’s an old saying, you can’t win all the time, except this team wants to consistently bust that cliché,” Obama said.

Obama praised the team for their academic achievements and their community work as well as their amazing athletic record – the Huskies have won 11 championships, six while Obama has been in office.

“I have a feeling this team will be back again. I will not be. I’ll be honest… I will miss the visits,” said Obama, whose term ends in January.

He gave a shout out to several team members, including seniors Breanna Stewart, Morgan Tuck and Moriah Jefferson, who graduated Sunday.

The team’s many visits to the White House have fostered familiarity and camaraderie between Huskies coach Geno Auriemma and the president, who joked he had established a small room with a cot in the White House for the frequent visitor, but not the Lincoln bedroom.

Obama also said Auriemma had brought a gift of a rocking chair on this visit, besides the traditional basketball and jersey.

“Now I’m not taking this as an insult, I’m assuming this it meant with love,” the president said. “But coach I do want you to know I’m not going out to pasture. In fact I may be able to go to one of your games live.”

Auriemma said he told the president when he was up for re-election in 2012, “You know your fourth year is coming up and I don’t know what the future holds for you, but we’re coming back. And he said, ‘so am I.”

Four years later, the coach said, “we’re probably going to miss him more than he misses us.”

Here is the White House video of the ceremonies, which start at about the 28:40 mark.