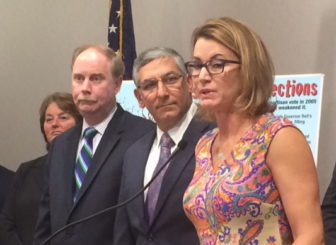 Connecticut’s delegation to the Republican National Convention will be a mix of neophytes smitten with the outsider politics of Donald J. Trump, as well as pillars of a GOP establishment still adjusting to him as the party’s presumptive nominee.

The Bush family may be spurning Trump, but one of George W. Bush’s old fundraisers, former Ambassador Charles L. Glazer of Greenwich, is a Trump delegate. So are two former GOP state chairs, Herb Shepardson and Richard Foley. Another, Chris Healy, is an alternate.

House Minority Leader Themis Klarides of Derby, where Trump won 75 percent of the vote in the Connecticut primary last month, is one of five legislators chosen as a delegate or alternate, despite expressing an early preference for Ohio Gov. John Kasich. 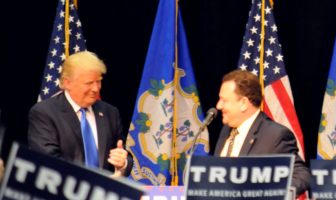 Donald J. Trump invites Rep. Tony D’Amelio onto the stage at a rally. D’Amelio, the first legislator to endorse Trump, will be a delegate.

Sen. Art Linares of Westbrook, one of the first two Hispanics elected to the Connecticut Senate, and Rep. Rosa C. Rebimbas of Naugatuck are alternates. Sen. Michael McLachlan of Danbury and Rep. Anthony J. D’Amelio of Waterbury are delegates. Rep. John H. Frey of Ridgefield is a superdelegate as a member of the Republican National Committee.

Linda McMahon of Greenwich, the World Wrestling Entertainment co-founder who spent $50 million on each of two losing campaigns for U.S. Senate in 2010 and 2012, will be joining them in Cleveland this summer as a delegate. Betsy McCaughey of Greenwich, the former lieutenant governor of New York, is an alternate.

The 25 delegates and 25 alternates selected by the Trump campaign were formally accepted Monday by the Republican State Central Committee. A copy was provided to the CT Mirror on Tuesday evening.

Proto, who has worked on other presidential campaigns, said the names were chosen after conversations by the state and national campaign staffs. The national campaign identified friends and business associates of the candidate as potential delegates.

“Linda McMahon is a long-time personal friend, from what we’ve been told, of Mr. Trump,” Proto said.

McMahon’s alternate will be Bob Ferguson, an early Trump supporter who recently was elected Republican town chairman of Weston.

Others delegates are relative newcomers to Connecticut politics like Susan Hatfield of Pomfret, a lawyer who was a young policy aide to Newt Gingrich while he was speaker of the U.S. House of Representatives. 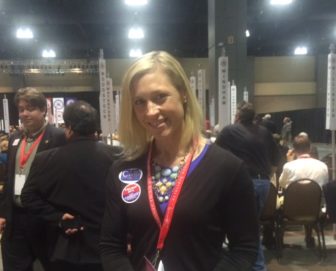 An early volunteer, Susan Hatfield of Pomfret, is a Trump delegate. She was at the state convention Monday.

“When Trump came into the picture, just like many, many people all across the country, I became interested in this candidate who was outside the establishment,” she said. “He’s really like my former boss: he thinks outside the box.”

She said she made hundreds of calls, buttonholed friends and became the de facto distributor of Trump lawn signs in her quiet corner of Connecticut, eventually delivering 800. Her volunteer work was not easy: Hatfield is a state prosecutor with a long daily commute, and she and her husband, a law enforcement officer, have two children, ages 4 and 8.

Hatfield said she loves that Trump does not parse his words.

“He plays his own game. He’s confident in his own skin. His approach is his own approach,” she said. “I think that’s what people like; he is a real person, and he sticks by what he believes is right for the country.”

Proto, a lawyer in Stratford, worked in Connecticut for John McCain’s two presidential campaigns in 2000 and 2008. In 2012 he volunteered for Mitt Romney in New Hampshire.

This year, he said he admired some of the more conventional candidates like former Florida Gov. Jeb Bush, New Jersey Gov. Chris Christie and Kasich. But they eventually struck him as too conventional for an unconventional time.

“I’ve gotten to that point in my life when I’m more interested in finding new ways to solve old problems,” he said.

That led him to go work for Trump with Clark, a West Hartford lawyer who ran Tom Foley’s losing campaign for governor.

Three others are superdelegates because of the positions they hold: J.R. Romano, the state chairman; and two members of the Republican National Committee, Patricia Longo and Frey, who also is a state represntative. All three are committed to Trump.