Congress fighting over Zika funding that could aid CT pharmaceuticals 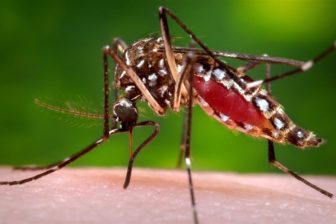 The Aedes aegypti mosquito that transmits the Zika virus.

Washington – Congress is tied in a partisan knot over funding the U.S. response to the  Zika virus outbreak, delaying money that Connecticut representatives say could help several Connecticut pharmaceutical companies continue their work developing a vaccine.

Congressional Republicans have rejected President Obama’s call for $1.9 billion in emergency funding to combat the spread of the disease, transmitted by mosquitoes.

Republicans want the administration to divert what remains of the $5 billion appropriated last year to fight Ebola to fight the Zika virus. They want any additional funding to be offset by cuts to other programs.

Democrats, including those from Connecticut, say the money should be appropriated immediately and treated as other emergency funding – like the money to help recover from Hurricanes Sandy and Katrina – without an offset.

“I think we should approve the amount requested by the president as soon as possible,” said Sen. Chris Murphy, D-Conn. “I have no clue why my colleagues are second-guessing health professionals.”

Obama wants the emergency money to be used to rapidly expand mosquito control programs, improve health services and support for low-income pregnant women, and to enhance the ability of Zika-affected countries overseas to better combat mosquitoes and control transmission. Although the viral infection can be relatively mild for the mother, the virus can be passed to a fetus and cause catastrophic birth defects to its brain.

Some of the money also would be used to accelerate vaccine research and diagnostic development and to expand laboratory testing – initiatives that would benefit Connecticut’s pharmaceutical industry.

“Connecticut companies are producing vaccines, but they can’t finish their work without federal funds,” Murphy said.

Three labs in the state are working on developing a Zika vaccine.

Protein Sciences in Meriden, which has developed vaccines for West Nile Virus and the Japanese encephalitis virus, is using its experience to start clinical trials on a Zika virus vaccine. It recently announced it has joined with Sinergium Biotech, a pharmaceutical company, and Mundo Sano, an Argentine health foundation, to license and produce the Zika vaccine.

CaroGen Corp., a Farmington-based biotechnology company with eight employees, began work in February. The company has opened a lab at UConn’s Technology Incubation Program to continue work on its “virus-like vesicle” vaccine platform that was developed at the Yale University School of Medicine.

Also working on a vaccine is Atwater Laboratory, led by Paulo Verardi, a Brazilian native and pathobiologist at the University of Connecticut.

So far, the Zika virus has infected more than 1,000 Americans on the U.S. mainland and the territories. Nearly half those infected live in Puerto Rico. In Connecticut, four residents, including a pregnant women, have been diagnosed with the disease. All four were infected with the virus outside the continental United States.

The virus is primarily spread through bites from the Aedes aegypti mosquito, which has been spotted as far north as New York.  It can also be sexually transmitted.

While Puerto Rico and the states bordering the Gulf of Mexico are most vulnerable to the disease, there are concerns the Zika virus may be passed along by the Aedes Albopictus, or the Asian Tiger mosquito, which has traveled to the United States from Southeast Asia and has made its home in Northeastern states.

Since Congress has not appropriated new money to fight Zika, the Obama administration has shifted $510 million from the Ebola program and about $44 million from a Department of Health and Human Services account that funds emergency preparedness operations in hospitals.

Rep. Rosa DeLauro, D-3rd District, said that means about $490,000 has been stripped from Connecticut hospitals.

DeLauro will join members of the Democratic Steering & Policy Committee to hold a hearing aimed at pressuring House Republicans to approve Zika funding. Anthony Fauci, director of the  National Institute of Allergy and Infectious Diseases, and Anne Schuchat, deputy director of the Centers for Disease Control and Prevention, are among the witnesses.

DeLauro is concerned Americans will become infected with the disease in increasingly large numbers when the mosquito season begins in July. Other Americans will likely contract the disease overseas, including some of those traveling to Brazil for the Olympics.

DeLauro said foot-dragging by Congress has hurt efforts to find a vaccine.

“You can’t engage pharmaceuticals and labs if they don’t think any money is coming,” DeLauro said.

“This is too important to ignore – and too important to be held hostage by Washington gridlock,” the governor said in a statement. “That’s why I’m urging Congress to immediately approve President Obama’s request for federal funds to protect American families from the threat posed by the Zika virus.”

Malloy also said that Connecticut has “been actively taking steps for months to prepare for Zika, including a coordinated, cross-functional response across agencies” and has been approved by the CDC for expedited testing at the Connecticut Department of Public Health Laboratory.