Coming to a high school near you: financial aid for college courses 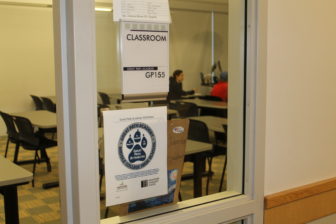 Hundreds of high school students participate in dual-enrollment college programs around the state. This one, in Manchester at Great Path Academy, is not among those approved for the new federal money for low-income students.

Hundreds of children from low-income Connecticut families will have a chance starting next school year to complete their first year of college entirely for free while they are still in high school, federal officials announced Monday.

Six Connecticut community colleges were among 44 schools selected by the Obama administration to participate in a new three-year pilot program allowing high school students to use federal financial aid to enroll in college courses.

“The courses students take while in high school, and the support they get to succeed in those courses are major factors in not only in whether students go to college but also how well they will do when they get there,” U.S. Education Secretary John B. King Jr. told reporters during a conference call. “Many students from low-income backgrounds do not have the opportunities to take the courses that will prepare them well for college… With this pilot program we are one step closer to making college more affordable and accessible to all students.”

While most high schools throughout the U.S. already offer dual-enrollment programs, students from low-income families are underrepresented because of financial barriers, reports the Education Commission of the States, a nonprofit that tracks education policies nationwide.

The system asked the U.S. Department of Education in January to provide Pell grant money so an additional 1,299 students from low-income families could enroll.

Under the right circumstances, a student taking part in a dual-enrollment program could earn half the credits for an associate’s degree by the time he or she graduates from high school. In Connecticut, there are currently 1,221 students taking college-credit coursework from the state’s community colleges or regional state universities in dual-enrollment programs.

On Monday, the federal government told the state’s Board of Regents that it would be picking up the cost for 380 existing students and an estimated 415 additional ones to take community college courses at schools in Enfield (25 students), Waterbury (100), Norwalk (180), Danielson (80) and Norwich (30). Additionally, a dual-enrollment program will open at Gateway Community College in New Haven, though how many students will be offered enrollment there has not been determined.

Proposals to offer dual-enrollment programs to more high school students in Bridgeport, Hartford and Middletown were not approved.

Jason Ebbeling, the college system’s executive director of student success programs, said the current dual-enrollment programs have proven successful in getting students to enroll in college upon graduation.

“We are only losing a couple of students,” he said. “The more students we can get early, the better off they are.”

But these programs come with a price tag.

While students are not charged anything to enroll, these programs are entirely funded by the public college system, which primarily gets its funding from the state and tuition charged to traditional students. However, the college system has been burdened by deficits in recent years. That’s because state funding has not kept pace with the college system’s growing costs, and tuition increases have not generated much additional revenue since they largely just offset steady declines in enrollment.

“The issue we have with further expanding these programs is that we don’t have enough funding in our system to fund everybody. This moves to providing more access,” said Ebbeling.

In response to significant dips in enrollment over the last five years, college officials have been working to expand enrollment of nontraditional students. State officials are still waiting to hear whether  Connecticut has been selected for another pilot program that would allow prisoners to be eligible for financial aid. If selected, the community colleges would begin providing college-level courses for hundreds of inmates.