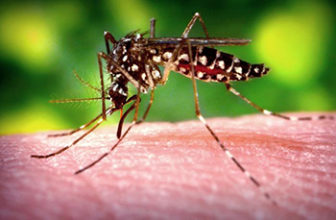 An Aedes species mosquito that transmits the Zika virus

Washington – The U.S. House of Representatives and Senate have split on how to fund federal efforts to fight the Zika virus, with Connecticut lawmakers playing key roles in trying to boost the amount of money that would go to states to battle the spread of the disease.

The Senate on Monday voted 68-29 on a procedural vote on a measure that would approve $1.1 billion to fund mosquito eradication, vaccine research and other programs aimed at fighting the Zika virus, which has infected six Connecticut residents who caught the disease overseas, two of them pregnant women.

The vote sets the stage to add the Zika money to an unrelated spending bill. But it is short of the $1.9 billion President Obama requested in February to battle the virus, which can cause severe birth defects.

Sen. Chris Murphy, D-Conn., co-sponsored an amendment that would fully fund the president’s request, but it failed to garner the 60 votes needed to move forward.

“Mosquito season is right around the corner, which means Zika and its devastating effects are too. We should be funding the president’s full emergency request to stamp out this disease – and we should have done it months ago – but I’m glad that we finally took the first step to confront this health crisis,” Murphy said.

“Connecticut may not be thought generally to be one of the warm climates, but in fact the mosquitoes are swarming and spawning there, and they include a type of mosquito, the Asian Tiger, that now has been documented to carry Zika,” Blumenthal said on the Senate floor. “That poses an immediate threat and an urgent one for Connecticut and for the entire Eastern Coast and Northeast United States.”

A showdown is looming between the Senate and the House, which is expected to take action on its Zika funding bill on Wednesday.

Unlike the Senate, the House bill would only provide about $622 million, mostly for grants to the states, and requires the money to be offset by transfers from other programs, including the one to fight the spread of Ebola.

Meanwhile, Rep. Rosa DeLauro, D-3rd District, made an impassioned plea on Tuesday to fellow members of the House Appropriations Committee to add $1.9 billion to fight Zika in the defense spending bill.

“We’ll look back at this and say, ‘We put people’s health at risk, we have delayed, we have caused people to suffer, and we have put this nation’s healthcare and the healthcare of others at real jeopardy for some ungodly reason,’” DeLauro said.

Her proposal was defeated in a voice vote.