Malloy zings GOP on bail reform, gets counter from Fasano 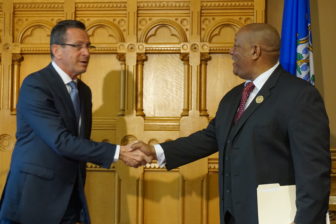 Gov. Dannel P. Malloy and the Connecticut leader of the NAACP pushed back Monday at Republican opposition to Malloy’s proposed bail reforms, casting them as an overdue blow for racial and economic equality.

Malloy said Republicans are misrepresenting the impact of eliminating bail for most misdemeanors, which he says would free hundreds of prisoners routinely held on low bonds because of the paucity of their finances and not the seriousness of their alleged crimes.

“What I’m simply saying is poor people shouldn’t be treated differently simply because they are poor,” Malloy said.

His press conference with Scott X. Esdaile, president of the Connecticut chapter of the NAACP, was an attempt to simultaneously reassure jittery Democratic allies and give second thoughts to Republican opponents.

Bail reform is one of two major elements in “An Act Concerning a Second Chance,” a measure awaiting action in a special session called primarily to address budget bills. The other is a more controversial plan to raise the age of criminal responsibility to 21 for other-than-major felonies.

Senate Minority Leader Len Fasano, R-North Haven, responded by challenging Malloy to focus his Second Chance initiative for 2016 on bail reform, which he supports in concept.

“Republicans and Democrats agree that the poor should not be kept in jail simply because they are poor. If Gov. Malloy truly cared about helping the poor who get stuck in jail because they can’t afford to pay small bonds, he would drop the ‘raise-the-age’ portion of his proposal, which has raised serious concerns amongst Republicans and Democrats alike,” Fasano said. “He would talk to Republicans about working together to reform the bail system and would be open to considering a Republican proposal to eliminate bond requirements for non-violent, victimless, non-selling misdemeanor drug offenses.”

Malloy said he is open to changes, but he declined to be specific, saying he did not want to negotiate through the press. It was unclear, however, if Malloy would consider abandoning raising the age, rather than limiting the crimes to which it would apply.

The administration did not treat the statement from Fasano, who previously has given Malloy the impression he had little room in his own caucus to support bail reforms on the scale sought by the governor, as a serious offer to negotiate.

“Senator Fasano has no credibility on the issue,” said Devon Puglia, a spokesman for the governor. “If he were serious, he’d pick up the phone and call us instead of issuing political press releases.”

House Minority Leader Themis Klarides, R-Derby, accused Malloy, as she did a year ago, of playing the “race card.” Last year the GOP shut down the House for five hours after Malloy criticized Republicans for opposing his plan to reduce racially disparate drug sentencing.

“We want to keep criminals who deserve to be in prison, in prison. This outrageous assertion that Republicans want ‘poor people’ to be in jail is offensive on every level,” she said. “This pathetic, last-minute effort to leverage support for a bill that could not pass in either the regular session, or the special session, shows how well crafted it is.”

The administration says a major goal of expanding the jurisdiction of the juvenile courts is to save young offenders from an adult criminal record for relatively minor crimes. Esdaile said the current system imposes a lifetime of punishment in the form of poorer education and employment prospects.

“The majority of the phone calls we get and the traffic we’re getting in our offices is, ‘Can you help me get a job? I have a record. I made some mistakes. I’m out now, but I’m trying to get my life back together. NAACP, what can you do for me?’ ” Esdaile said. “A lot of the situations we’re facing, we re handcuffed.”

About $15 million in savings in the recently approved budget assumes the closing of a prison, which Malloy says would be difficult without bail reform. Malloy says his proposal is hardly radical, given that 90 percent of the people arrested are released within 24 hours on bail or a promise to appear.

“When the Republicans say the governor just wants to get people out of jail, they’re not telling the whole truth, because the laws that they’ve written are permitting 90 percent of the people to get out of jail. But if you re poor — increasingly in our cities, if you are black or Hispanic, then you don’t get out of jail,” Malloy said. “Ninety percent of people get out. It’s the poor people who are stuck. And who gets stuck with the bill? The taxpayers.”

Passage of any aspect of Second Chance is uncertain. The administration sees the Senate evenly divided, requiring a tie-breaking vote from the chamber’s presiding officer, Lt. Gov. Nancy Wyman. While the administration had counted a majority in the House near the end of the regular session, support generally was described as unenthusiastic.

Correction: As originally posted this story referred to Sen. Len Fasano as being from North Branford, not North Haven.