GE part of a national move away from big, suburban office parks 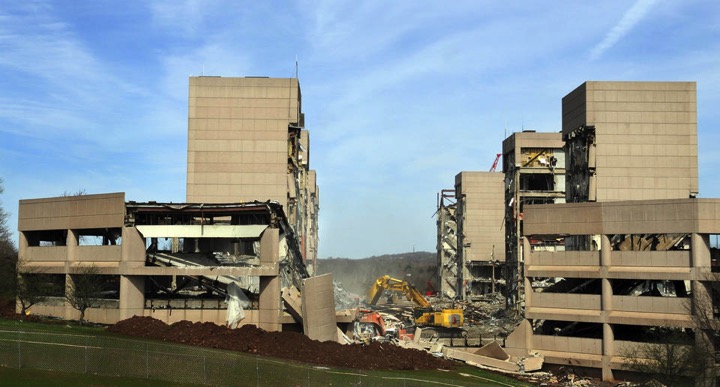 Demolition of the former Aetna complex in Middletown.

When General Electric first suggested that it might pull its corporate headquarters out of Connecticut, in June of 2015, the company’s rationale appeared to be taxes and the business climate. But when it made the actual announcement in January that it would move to Boston, the message had changed.

The company, after three years of informal planning, was making what Bloomberg News called a “digital move.” It is reshaping itself as a digital manufacturer and wants to be part of The Hub’s technology hub, its mix of tech companies, research universities and skilled workers.

“We like the idea of being able to walk out the door and interact with an ecosystem that is very much focused on the same things we’re trying to focus on,” GE’s chief financial officer, Jeff Bornstein, told an interviewer earlier this year. 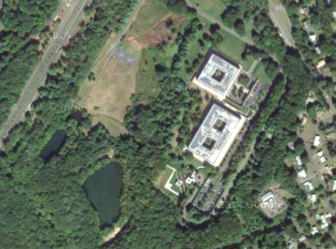 Aerial and ground-level views of the General Electric campus in Fairfield.  The Merritt Parkway is at left in the aerial view.

So GE wasn’t being pushed out of Connecticut as much as it was drawn into Boston. Among other lessons, the move provides further evidence that large, isolated, one-tenant suburban office parks, such as the sleek but aging campus that GE has occupied since 1974 on 68 arboreal acres in Fairfield, have seen their day.

“They are the dinosaurs,” said Hartford area architect and planner Patrick Pinnell, “and the furry little mammals are winning.” 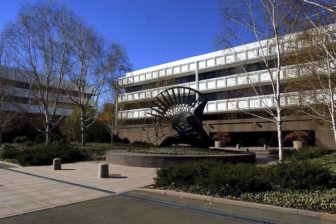 While not true in every case — Apple, to cite a glaring counter-example, is building a new, $6 billion corporate palace in the Silicon Valley — many of the post Word War II corporate campuses in Connecticut and across the country are reaching what might be called their dinosaur moment: evolution or extinction.

It is a sea change in the American workplace, happening because companies no longer need as much space and younger workers would like to be in more stimulating places.

But then, what happens to the former office park, the white elephant standing forlornly in the countryside?

Though a few major companies moved facilities to the suburbs during World War II — Bell Labs in suburban New Jersey, for example — in some measure for defense reasons, the first planned office park opened in 1955 in Mountain Brook, Ala., then a white, upper-class suburb of Birmingham, Ala., according to The Washington Post and other sources.

They spread quickly across the country. Connecticut General Insurance Co. (now Cigna) left its downtown Hartford site for one of the state’s first suburban campuses, a Modernist complex in Bloomfield. The pattern would continue across the country for three decades.

The building of office parks was part of the broader postwar push to the suburbs, driven by the mix of cheap cars and cheap gas, new highways and airports, GI loans, racism, Pax Americana prosperity and, some say, the traditional Jeffersonian distrust of cities. Companies followed employees — often the CEO — who had already moved to the suburbs.

Workers were isolated in a cubicle farm set in a field of asphalt, and that was okay. Isolation was actually a value; there were few distractions for workers doing routine tasks, said James Hughes, dean of the Edward J. Bloustein School of Planning and Public Policy at Rutgers University and an authority on corporate environments.

Time has passed; things have changed. Buildings are outdated. Most of the office parks predate the Internet and the changes it has wrought. Much of the routine work from 1960 has been automated or outsourced. Workers can telecommute. Companies don’t need as much space, and indeed, don’t want to pay for big open floor plans. “Global corporate cost-cutting has finally gotten to real estate,” said Hughes.

Perhaps more importantly, the Millennials, the generation born in the last two decades of the 20th century (definitions vary slightly), are not terribly interested in sitting in commuter traffic to get to isolated office parks, or even living in distant suburbs. They are willing to forego a free parking place and the car to park in it. They want the buzz and hum of urban areas.

Two surveys from 2014, one by the Rockefeller Foundation and Transportation for America and another by the American Planing Association affirm what parents are seeing here and around the country — many Millennials are moving to cities, looking for multi-faceted, walkable, technically advanced communities with good transportation options.

“Baby Boomers used to ask: ‘How many ceiling tiles do I have in my cubicle,’ “ said Hughes, tongue slightly in cheek. “Now the Millennials ask: ‘What is the quality of my live-work-play environment?’ ”

The Millennial generation is 80 million strong. They are the talent, and, as corporate relocation specialist John Boyd recently told The Boston Globe, “companies want to be where the talent is.”

So what happens to the big old office parks? Three scenarios present themselves:

Some survive. Some companies like the suburbs, and will bus workers from nearby cities, as Apple does for San Francisco residents. Hughes opined that the closer companies are to cities, transit or “suburban activity centers,” the better chance they have to remain viable.

Some office parks are being torn down and replaced by entirely new uses. For example, the vast former Aetna campus in Middletown, which was closed in 2010 and demolished the following year, will become a FedEx distribution hub; such facilities are a not-uncommon fate of former office parks. The 1.3 million-square-foot Aetna complex, built at a cost of $170 million, was only 26 years old when it closed. The Hartford’s Simsbury campus, which the insurance company abandoned in 2015, has been sold to a New Jersey developer who plans to demolish the buildings on the 172-acre site and construct a mixed-use commercial and residential development.

A third variation is to retrofit the existing structures for another life, usually with a mix of uses, multiple tenants and urban-like amenities. This could be the future of the GE complex in Fairfield, as it is with countless other office parks, including the huge former Union Carbide headquarters in Danbury.

The retrofit movement bows to the market reality that there are “very, very few” companies looking for 1.2 million square feet of office space, said Christian Bangert, senior vice-president of RHYS, a commercial real estate firm in Stamford. He said the more typical request is for 5,000 to 20,000 square feet.

Smaller office complexes with multiple clients in several buildings, which can be found in Windsor, Shelton and many other communities across the state, have been more resilient, and so retrofitting a single-tenant complex for multiple tenants would seem to make sense.

But such transformations are not for the faint of heart, Bangert observes. They can be complicated and expensive, a challenge to the imagination as well as the wallet. Developers across the country are looking at housing, retail, medical offices, colleges. The bucolic settings might be appropriate for nursing homes or some kinds of hospitals, Bangert said.

Consider the former Union Carbide complex in Danbury, 15 interconnected buildings constructed in 1982 at a cost of $190 million. It has a total of 2.1 million square feet, of which 1.2 million is office space. In 2009, the New York firm Matrix Realty Group bought the property for $72.4 million and renamed it the Matrix Corporate Center. 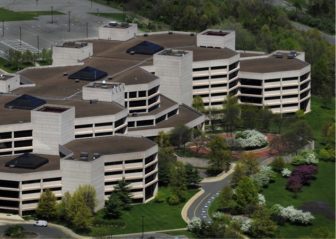 The former Aetna complex in Middletown

Matrix carried out renovations and added or enhanced amenities such as child care, a credit union, barber shop, hair salon, Starbucks, banquet facility, etc. Some space was already being leased to outside tenants after Union Carbide was bought out; Matrix leased another quarter million square feet, bringing the total to about 700,000 square feet under lease, said company official Aaron Smiles. But now it is losing a major tenant, Praxair, which is moving into its own building in Danbury.

So Matrix will broaden the tenant base. It is just concluding a zoning change process that will allow mixed-use development on the 100-acre site, which could mean housing, a medical center, classrooms or other facilities, as well as offices. “We are testing the market,”  Smiles said. Danbury has been quietly gaining jobs and population in recent years, so location, location should help.

Another variation of the office park makeover is the “technology hub” or “innovation park,” a mix of educational and tech facilities aimed at growing tech business. This is the present hope for the GE campus in Fairfield.

Kleban Properties, a real estate and development firm and a major player in Fairfield, has proposed turning the GE campus into a technology center in partnership with Fairfield University. The project is contingent on GE’s agreeing to sell the property to Kleban, a threshold that has not yet been crossed.

Hughes said there isn’t much experience nationally with such projects but predicts that “some will be successful.”

If this one is, it could add 800 to 1,000 jobs, said First Selectman Mike Tetreau, the town’s chief administrative officer, greatly softening the blow of the GE departure. “I’m very optimistic,” Tetreau said.

Many see the demise of the dinosaur, the single-user suburban office park, as more silver lining than cloud. Cities were once hotbeds of innovation and collaboration, driven by face-to-face contact. If that notion is rediscovered, they say, whether in a traditional city such as Boston or in micro-urban environments such as those projected for Danbury and Fairfield, it is probably a good thing.