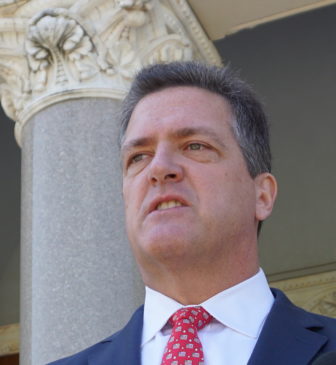 August Wolf as he announced his petition drive to qualify for a primary.

Samantha Menh is the latest former Wolf campaign aide to allege a frat-boy atmosphere in the campaign of Wolf, a Stamford businessman and former Olympic shot putter now in the final week of a petition drive to force a primary for the GOP nomination.

The lawsuit she filed in Stamford Superior Court extensively quotes a long passage from a CT Mirror article about the campaign’s troubles as the factors that caused her to demand a $50,000 guarantee for signing on with Wolf on March 18. The suit names Wolf and his campaign manager, Baylor Myers, as defendants.

Menh is seeking $160,000 in compensatory damages and $2 million in punitive damages. She is claiming breach of contract and wrongful termination.

Wolf, who failed to garner sufficient support at a nominating convention last month to automatically qualify for a primary against the convention-endorsed candidate, state Rep. Dan Carter of Bethel, denied all claims in the lawsuit that was filed May 27.

“I was shocked and appalled by the outrageous claims made in this lawsuit. I did not and would never engage in this type of behavior and neither would anyone on the campaign,” he said. “The allegations are completely baseless. They are an obvious attempt by a former contractor to extort money at a critical time in the campaign, which she did over the last five days. I’m not going to tolerate it. I am going to defend this vigorously.”

“The reality is Mrs. Menh was struggling in her work due to poor organizational skills, reckless decision making, and unethical professional and personal behavior,” Wolf said in a written statement. “We attempted to resolve these issues and keep her on the staff, yet she voluntarily tendered her resignation.We engaged Ms. Menh with great hopes; we are very sad to see it end this way.”

She is not the first former staffer to accuse Wolf, who is divorced, of inappropriate sexual banter. In interviews in February with CT Mirror, former staffers described Wolf as sharing stories about a long-ago sexual escapade with one, gossiping about the romantic life of a gay staffer with another.