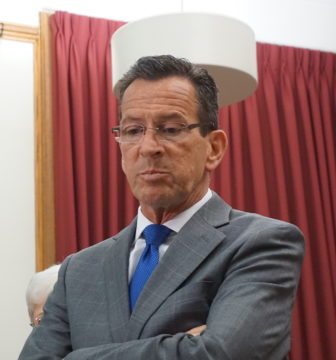 As Treasurer Denise Nappier discovered Friday, one of the surest ways to provoke a veto from Gov. Dannel P. Malloy this year is with legislation that intrudes on what the Malloy administration sees as the prerogatives of the executive branch.

Malloy tweaked the General Assembly and Nappier in a message explaining his veto Friday of a bill that would have eliminated the administration’s role in setting compensation paid to investment officers who help Nappier’s office manage the state’s $29.7 billion pension and trust funds.

“I am surprised that at a time when the legislature included no money for increased state salaries in the budget, we are eliminating positions and currently negotiating contracts with the majority of our state employees, that the legislature would pass a bill such as this,” Malloy wrote.

One of the other two bills vetoed Friday would have directed the Department of Social Services to issue a request for proposals for procuring non-emergency medical transportation for Medicaid recipients. He called it “a clear legislative intrusion into the function of the executive branch.”

A bill passed at the request of the state auditors regarding state contracting procedures met the same fate for the same reason on Thursday. In total, the governor has signed 120 bills and vetoed six from the regular session of the General Assembly.

The bill sought by Nappier would have allowed her to set the compensation scale for principal investment officers in consultation with the independent Investment Advisory Council, as she currently does for the chief and deputy chief investment officers. It passed unanimously in the Senate and on a vote of 144 to 1 in the House, with only Rep. Patricia Dillon, D-New Haven, in opposition.

“If anything is penny wise and pound foolish, this is it,” Nappier said Friday night of the veto, saying it “demonstrates a failure to understand the necessity of filling these highly skilled, specialized positions with the best talent available.”

In testimony submitted to the legislature, Nappier said the change was necessary to allow her office to recruit and retain senior investment professionals, whose average stay is only 2.6 years, compared to more than 20 years for other professionals in her office.

Nappier had noted that the investment officers are paid out of the state employee retirement fund, not the state’s general fund.

“The governor is being short sighted,” she said Friday.

The Medicaid transportation veto contained some good news for the proponents of the bill, which was passed in response to complaints about the current provider: The administration basically intends to abide by the wishes of the legislature.

Sheldon Toubman, a legal aid lawyer, said, “Children are not getting to chemotherapy appointments, the elderly are waiting hours for rides and  the mentally ill are left at medical facilities hours after the medical office has closed.  Rather than address the problem, year after year the State has paid the contractor fees and bonuses — at this point in an amount in excess of $24 million.”

In his veto message, Malloy said the Department of Social Services already has begun a new procurement process in a “manner taking into account the circumstances and issues identified by the legislature.”

“The longer the process takes, the longer our vulnerable clients who depend on medical transportation, and the taxpayers paying the current problematic contractor, will continue to be harmed,” he said. “Accordingly, we trust that the governor will ensure that an RFP is indeed expeditiously issued and that a new contract, with much stronger standards and enforcement, is entered into as soon as possible thereafter.”