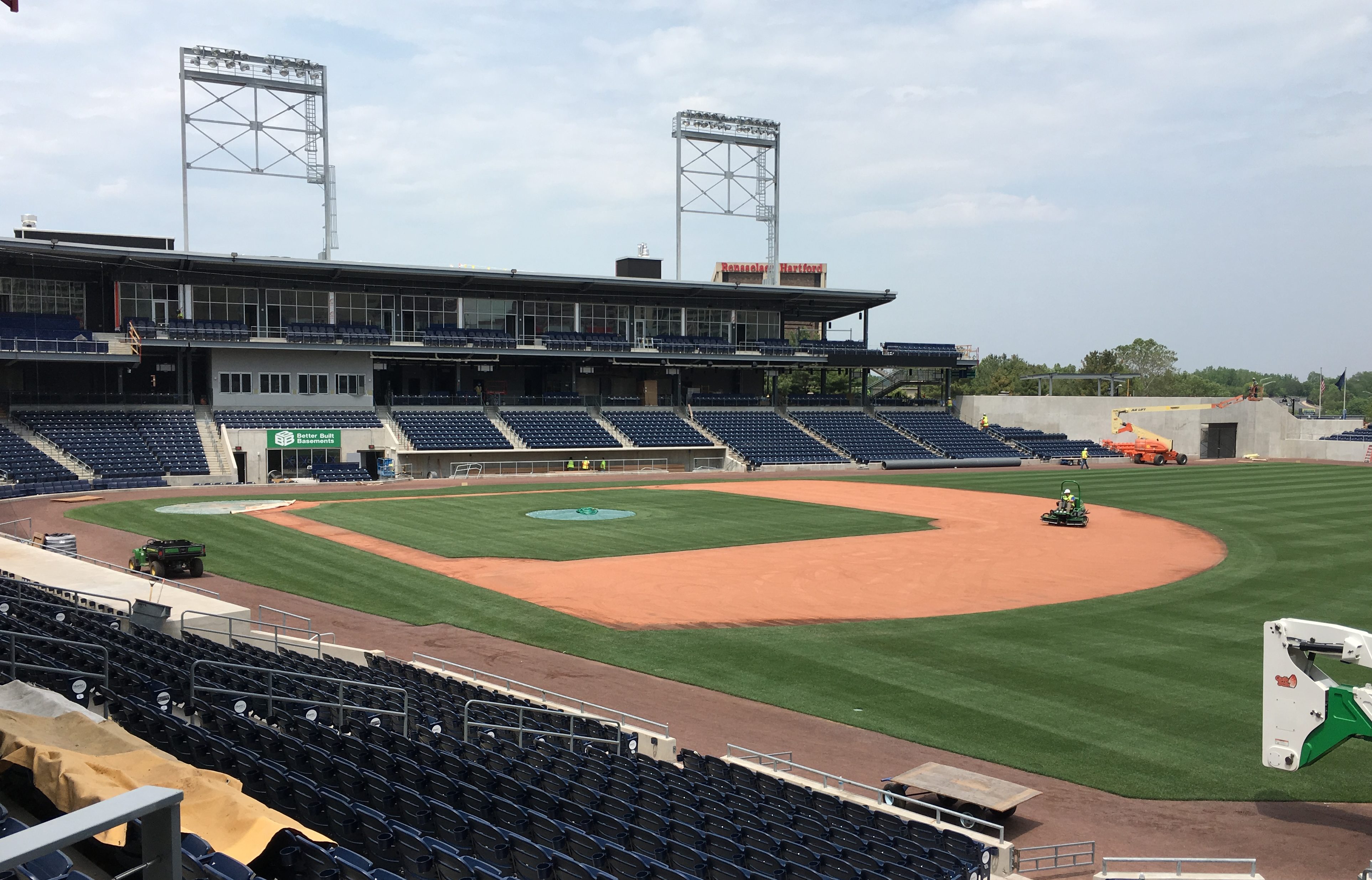 The controversial delays and added costs at Hartford’s new minor league baseball stadium not only put the 2016 Hartford Yard Goats baseball season on life support, it threatens what could be the city’s boldest renewal effort since the Front Street (nee Adriaen’s Landing) project that began in the 1990s.

Dunkin’ Donuts Park is supposed to be the first phase of a broader project to redevelop land just north of I-84 in downtown Hartford, an area called Downtown North or DoNo. Alas, the project developer, DoNo Hartford LLC, an affiliate of Centerplan Companies, ran up a $10.4 million cost overrun and missed two deadlines this year to complete the stadium. After an email Friday indicated the stadium was still two months or more from meeting city building codes, the umpire gave DoNo Hartford the thumb – Mayor Luke Bronin terminated the contract with the developer on Monday.

This follows a vote by the quasi-public Hartford Stadium Authority two weeks ago to pull the performance bond on the project, that is, bring in the insurance company that guaranteed the project’s completion to finish the job. Whether that will happen, or whether the project will be tied up in court, remains to be seen. What hangs in the balance is the part of the project many considered its most important.

Hartford, like a number of mostly mid-sized cities across the country, is attempting to use a sports stadium – and buildings around it – to revitalize a part of its downtown and grow its tax base.

The DoNo area is acreage that was orphaned and largely abandoned when I-84 was fatefully bulldozed through the center of the city in the 1960s. Once a functional and racially diverse part of the downtown fabric, the DoNo area soon took on the look of an archeological site; a few older buildings surrounded by scruffy surface parking lots.  The urban riots of the late 1960s and early 1970s further weakened the area. 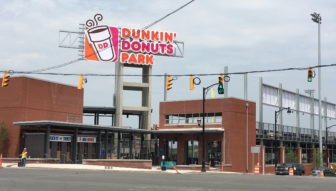 The baseball stadium project could start to bring the area back, as stadium-centered developments have in some other cities. But to become a downtown neighborhood the area needs the apartments, grocery store, restaurants, hotel and stores. After Monday’s action it is not clear if, when, and by whom they will be built.

DoNo Hartford is supposed to build them, but has lost the confidence of city officials. “There are serious questions about whether DoNo has the competence, experience and financing to do phase two,” said I. Charles Mathews, chairman of the Hartford Stadium Authority.

A spokesman for the company declined comment for this article, saying only that “everything is in flux.” DoNo Hartford officials have blamed the delays and overruns on city-imposed changes. Mr. Mathews and other officials strongly disagree.

Mr. Bronin said in an interview last week his first order of business will be to get the stadium finished. Then he will turn his attention to phase two. “Many years from now, we don’t want to look over there and see nothing but a stadium surrounded by surface parking lots.”

When he made the out-of-the-blue announcement two years ago that the New Britain Rock Cats Double A minor league baseball team would move to Hartford in 2016, then-Mayor Pedro Segarra said of the project: “It’s not about baseball. It is about economic development.”

This caused a few eyes to roll, because at that point the project was just the stadium, and stadiums by themselves don’t generate much economic development.

Though team owners for decades have been selling stadiums as generators of jobs and businesses, and many communities have been all too willing to take the cheese, leading economists have debunked the notion for at least a quarter century. Stadiums generate low-paying seasonal jobs, substitute one form of entertainment spending for another and see revenues leave the community because many players (and owners) don’t live there.

Economists Andrew Zimbalist of Smith College and John Siegfried of Vanderbilt University, writing in the Journal of Economic Perspectives in 2000, offered about as strong a put-down as academic prose will allow: “Few fields of empirical economic research offer virtual unanimity of findings. Yet, independent work on the economic impact of stadiums and arenas has uniformly found that there is no statistically significant positive correlation between sports facility construction and economic development.”

They, like other economic researchers, were looking at individual stadium projects. But what about stadium-centered development, where a ballpark or arena is the centerpiece or anchor of a larger development, perhaps the urban equivalent of building houses around golf courses?

Mathews said after Segarra’s announcement, research and community conversations pointed to the need for a larger development. He said a request for proposals was issued, and of the three responses, Centerplan/DoNo Hartford’s offered the broadest vision – a 6,000-seat stadium, then a mixed-use neighborhood of apartments, a restaurant, a grocery store and parking, in total a $350 million project. The firm was hired.

As is evident in New Britain and Norwich, stadiums built on the fringes of cities don’t engender much economic activity. For the past decade or so, a few large and many mid-sized cities have mounted such “district development” projects in their downtowns. The most extreme might be the Barclays Center in Brooklyn, “a real estate development with an arena thrown in,” said economist Victor A. Matheson of Holy Cross, who studies the economic impact of sports events and venues.

The more common model is the one Hartford is trying to emulate; a minor league baseball stadium with nearby housing, retail and restaurants, which have been or are being built in cities such as Dayton, Ohio; Birmingham, Ala.; Columbia and Greenville, S.C.; and Amarillo, Tex., among others. 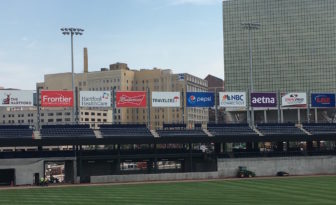 Fort Wayne, Ind., is frequently praised for attracting millions of dollars worth of development around Parkview Field, home of the Class A Fort Wayne TinCaps (goofy names for minor league teams are in vogue).

The new model— though urban ballparks are an old idea rediscovered (see: Wrigley Field) — is “better than what they were building 25 years ago — a fortress surrounded by a moat of parking,” said Matheson. As for the district model: “I don’t know that it works, but maybe.”

“It’s fine in the abstract,” said Zimbalist in a recent interview. But actually making it work “depends on the details. What is the level of commitment? How is it funded? What is the nature of the area?”

The funding commitment in DoNo’s second phase is uncertain. The plan was for the Hartford Stadium Authority to borrow money to build the stadium and for DoNo Hartford to finance the rest of the project. This struck some observers as unusual; nearly all of the other new housing built in downtown Hartford in recent years has required substantial subsidies because the rents they command do not match the cost of construction and the city’s high taxes.

After the Hartford city council last year asked for some affordable units to be included in the housing, the developer went to the Capital Region Development Authority to ask for $15 million to subsidize the first phase of apartment construction. The discussions were never concluded, seemingly because the developer focused on the stadium.

The first phase of mixed-use development, with 172 apartments on what is called Parcel E across from the stadium, was supposed to begin construction by Nov. 1, according to the development agreement. Like the stadium,  it is behind schedule. This is a problem for the city, which hopes that property taxes from the non-baseball development will help pay down the stadium bonds.

If funding and commitments are in place for the housing and other pieces of the project, city officials are unaware of it.

When stadium authority chairman Mathews was a city councilman and deputy mayor in Hartford in the 1980s, he tried mightily to bring development to the area now called DoNo. “It was extremely difficult; I tried for 10 years.” No one wanted to cross I-84, the area was thought desolate and dangerous.

Though some may still think of it that way, much has changed in the past 30 years. Platforms were built over the highway in the early 1990s to better connect the area to downtown. New housing has been built on Main Street north of the highway. The Albany Avenue corridor has seen an increase in small businesses. Buildings on the south or downtown side of the highway, the G Fox, Richardson and others, have been rehabbed, creating vibrant street life just across the road from DoNo.

Importantly, the city’s police station moved to High Street, a golf shot with a good roll from the stadium, a couple of years ago, increasing the perception of safety.

Officials hoped the stadium would be a catalyst for new investment around the DoNo footprint, and that actually may be happening. A new 81-room hotel is going up on Market Street just east of the DoNo property, and the adjacent Radisson Hotel on Morgan Street plans to turn its top floors into apartments. Both projects were influenced by the coming of the stadium.

Will more follow? Is the area finally primed for redevelopment? Can the funding be found?

With the turmoil over the stadium and questions surrounding the developer, the key virtue may well be patience. The Front Street redevelopment took 15 years to complete. Oz Griebel, president and CEO of the MetroHartford Alliance and a member of the Hartford Stadium Authority, has been supportive of the stadium project, believing it is a strong amenity for downtown Hartford, a catalyst for new development and a means of reconnecting North Hartford to downtown. But, he cautioned, it is not going to happen overnight.

“We’ve got to be realistic about the timing and the financing.” he said. 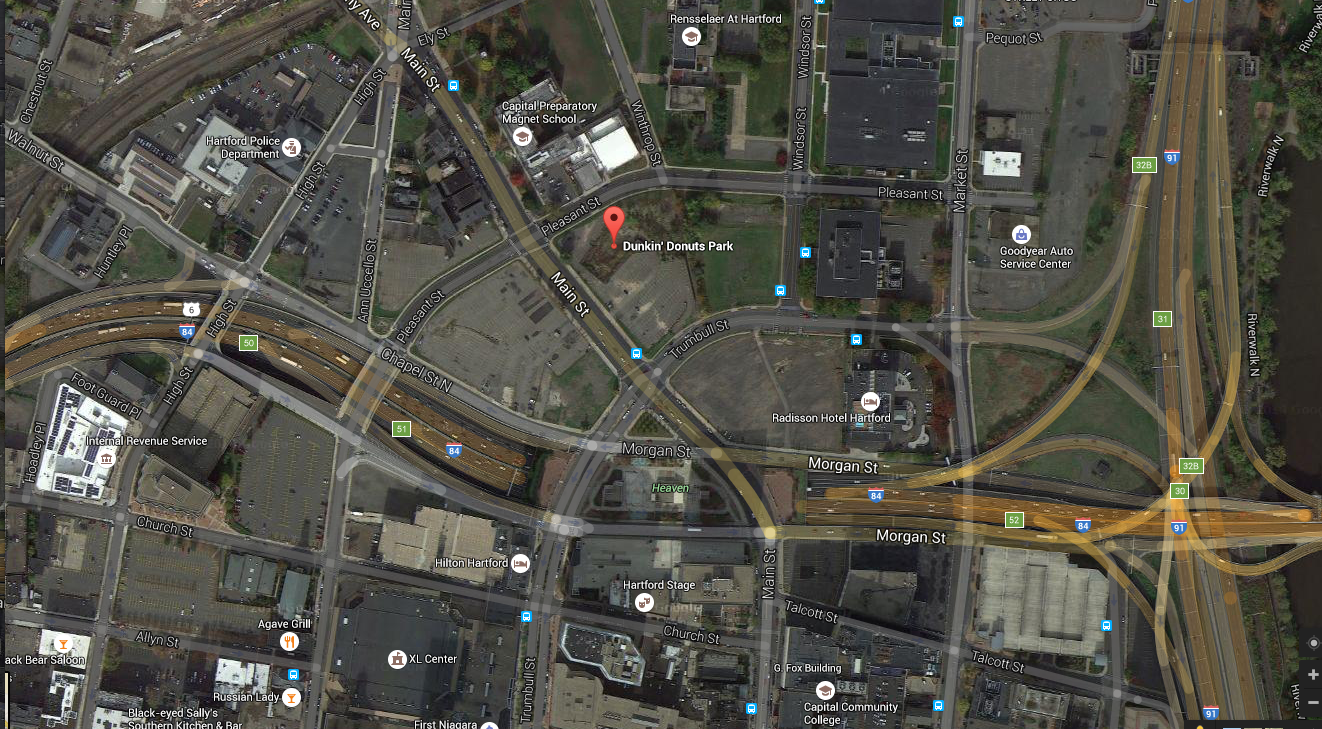 Satellite view of the DoNo neighborhood, I-84 and nearby downtown areas.