With mixed feelings, labor makes its endorsements in CT 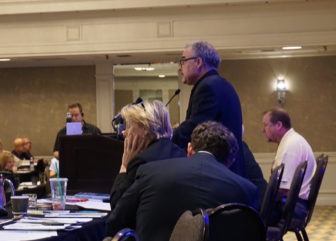 Sal Luciano of AFSCME listening to objections to the endorsement of Sharon Palmer. At left, Lori J. Pelletier, president of the AFL-CIO.

The debate was raucous and raw, and two old friends drew angry opposition. But the Connecticut AFL-CIO eventually agreed Friday on dozens of endorsements of Democrats for the General Assembly and Congress.

U.S. Rep. Jim Himes, D-4th District, who supported a trans-Pacific trade agreement opposed by unions, did not seek the labor federation’s endorsement for the first time. U.S. Sen. Richard Blumenthal and the four other House members, all Democrats, were endorsed.

Only 13 incumbents in the General Assembly were endorsed: nine House members and four senators, all but two of whom voted for the state budget recently adopted over the objections of labor. With challengers, 37 state legislative candidates won labor’s backing. All are Democrats.

The endorsed incumbents in the legislature who voted for the budget also will get a letter stating that their backing was due to the totality of their records, despite breaking with labor over the budget.

The four senators to be endorsed are: Gary Winfield of New Haven, Terry Gerratana of New Britain, Danté Bartolomeo of Meriden and Cathy Osten of Sprague. A half-dozen senators who were endorsed in 2014 were not on the list Friday, including Senate President Pro Tem Martin M. Looney of New Haven.

All except Morin and Randall voted for the budget, which was balanced with spending cuts that mean layoffs of state employees and reductions in state services.

Exactly what those endorsements will be worth is to be determined. In the era of public financing, unions generally do not contribute directly to candidates, but they can turn out voters, especially in districts where the density of union members is high.

Lori J. Pelletier, the president of the AFL-CIO, said unions will prioritize the races during the summer.

The debate over Palmer was poignant. As the president of AFT and an AFL-CIO vice president, Palmer was a popular figure in labor circles. But as Malloy’s labor commissioner, she downsized her own department before retiring. 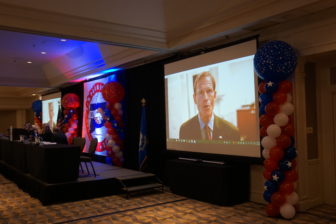 Richard Blumenthal appeared by video, then made a live appearance.

Xavier Gordon of AFSCME Local 269, whose colleagues were laid off, didn’t care.

“She turned her back on us and the state of Connecticut,” he told the delegates at the endorsement convention. “I don’t care who it is. You need to fight for us. You need to stand for us.”

William Henderson, the president of the Communications Workers of America Local 1298, was one of the union leaders who defended Palmer – and noted that her opponent, Rep. Kathleen McCarty, R-Waterford, has a labor grade of 40 percent.

“We have to look at the big picture,” Henderson said. “I’m not going to say I agree with what Sharon did.”

Charles DellaRocco of AFSCME Local 749 urged the rejection of Aresimowicz, who is the education coordinator for AFSCME Council 4, the largest union in the Connecticut AFL-CIO.

“My union members pay for his salary,” he said.

In the race for an open seat in the 56th House District of Vernon, Brian Anderson, the political director of AFSCME, made a plea for a dual endorsement, not only the choice of the federation’s political committee, Mike Winkler, the Democrat. His Republican opponent, Jim Tedford, and Winkler are both union activists.

Ally Sexton, a member of Winkler’s union, A&R, which represents mainly white-collar state employees, said she knew Winkler, but could not support Tedford, an AFSCME member, because he was a Republican.

“I am fearful of him, because he is a Republican,” she said.

The sole endorsement went to Winkler.

Dan Carter, a Republican candidate for U.S. Senate, addressed the convention, conceding he had no expectation of being endorsed over the Democratic incumbent, Blumenthal.

In three terms as a state legislator, Carter had a lifetime labor score of 38 percent, but he pledged to work with labor if elected.

“I’m an open book. I’ll tell you where I stand,” he said. “I want the communication. I want the dialogue.”

Blumenthal, who was in Washington for a vote, did not address the convention before the endorsement. Instead, he sent a video. But the senator arrived from Washington as the delegates finished, briefly taking the stage to thank them.

Kyle Constable contributed to this report.