With talkathon, Murphy gambled – and won 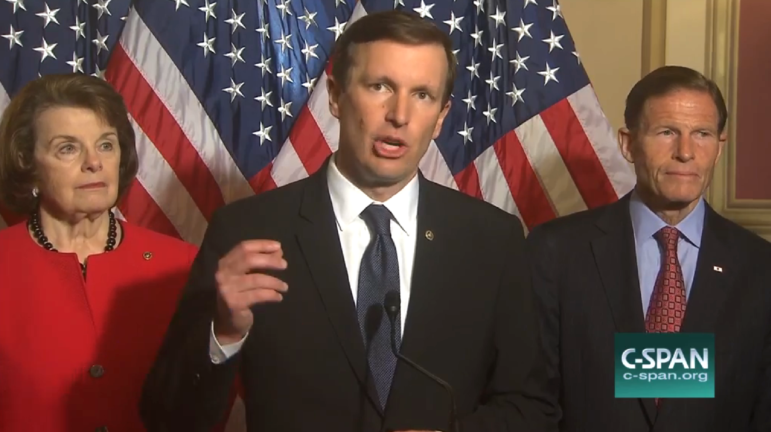 Washington – For nearly 15 hours, Sen. Chris Murphy was limited to standing – never sitting—near his desk on the Senate floor.

Since bathroom breaks were not allowed, he popped lozenges instead of drinking water to be able to keep a talkathon going about the need to tighten gun regulations in the wake of the Orlando shootings. He spoke from 11:21 a.m. Wednesday to 2:11 a.m. Thursday.

“My legs are a little bit rubbery, but my heart is strong,” Murphy said Thursday morning.

Murphy gambled that he was up to the physical and intellectual rigors of the challenge – an open-ended filibuster aimed at pressuring Senate GOP leaders to hold votes on gun safety issues – and he won. But there was always a risk of failure, said Sen. Ben Cardin, D-Md.

“It was not organized; it was spontaneous, and it could have failed,” he said.

But Cardin and 39 other Democratic senators helped Murphy sustain his filibuster until GOP leaders conceded to holding a vote on legislation that would bar those on the federal terrorist watch list from owning a gun and on another measure that would expand FBI background checks to sales of firearms at gun shows or by individuals over the Internet.

Votes on those measures are scheduled for Monday. Another two GOP-sponsored gun-related provisions, which Murphy and other Democrats oppose, will also be considered. Each will need 60 votes for approval and will be represented as amendments to a spending bill that would fund the Commerce and Justice departments next year.

The filibuster started off Wednesday morning with two Murphy allies, Sens. Cory Booker, D-N.J.,  and Richard Blumenthal, D-Conn., who stayed for the duration.

First slowly, and then in greater numbers, other Senate Democrats joined the filibuster, telling stories of gun violence in their states and reading off the list of victims, including the 49 killed by Omar Mateen at an Orlando nightclub that was a favorite of the LGBT community.

“I didn’t have to do as much talking as I would have had to do because I had these men and women on my side,” Murphy said.

Blumenthal said the filibuster “happened without anybody twisting arms or persuading anybody. It was an outpouring by our colleagues.”

Murphy kept to certain themes during his hours and hours of talking. He spoke passionately of the victims of gun violence, including those slain in Newtown, and assured skeptics that efforts to pass what he called “common-sense” measures were not part of a “slippery slope” that would lead to draconian gun control measures and the federal confiscation of firearms.

He also set a civil tone to the discourse, repeatedly asking Republicans to join in supporting the two Democratic amendments, which have failed before because of a lack of GOP support.

On Thursday, fellow Democrats said Murphy succeeded because he tapped the frustration members of the party felt over congressional inaction on gun control, even as states – including Connecticut, New Jersey, Colorado and Maryland – approved tougher gun control measures in the wake of the Sandy Hook killings and mass shootings since then.

“There was a real hope that this could get done,” he said.

Sen. Robert Menendez, D-N.J., said the filibuster galvanized Democrats, and it crystalized for party members that “enough was enough.”

When Murphy on Thursday walked into the room in the U.S. Capitol where Democratic policy lunches are held, he was given a rousing hand of applause.

The amendment that would expand background checks, which will be voted on by the Senate Monday, is sponsored by Murphy, Booker and Sen. Charles Schumer, D-N.Y. It also would withhold federal policing grants from states that did not fully report criminal and mental health records to the FBI’s National Instant Criminal Background Check System, or NICS.

The other Democratic amendment to win a vote, which would close the so-called terror gap, is sponsored by Sen. Dianne Feinstein, D-Calif.

She tweaked her legislation, which failed in the Senate in December, to win approval of the White House and the Justice Department. The amendment, co-sponsored by Murphy and Blumenthal, would give the U.S. attorney general authority to block the sale of a firearm to anyone suspected of being “a threat to the public safety” and/or suspected of terrorist ties. It also would allow the attorney general to block sales to those who have been on the terror watch list in the past five years to make sure that people like Mateen could no longer legally purchase a gun.

Mateen was investigated twice by the FBI, in 2013 and 2014. He was initially put on the terrorist watch list but was removed after the FBI dropped the first probe. Both investigations ended without charges against Mateen.

Murphy said he is not certain the gun amendments will pass – the support of 14 GOP senators would be needed for approval – but at the very least we need to get a vote on them.”

Gun safety advocates are concerned Republicans will vote for competing and ineffective amendments so they can tell voters  they voted for gun safety.

One amendment that will be considered Monday, sponsored by Sen. John Cornyn, R-Texas, would allow the U.S. attorney general to delay the purchase of a firearm for up to three business days to allow a petition to be presented to a court to block the sale.

Murphy derided the Cornyn amendment because it would not immediately block the sale of a gun to a suspected terrorist and said it is a “non-starter.”

Another measure scheduled for a vote, sponsored by Sen. Charles Grassley, R-Iowa, would boost money for the FBI background check program and would notify law enforcement official if a person who has been investigated for terrorism over the past five years tries to buy a gun. But, like the Cornyn amendment, it would anot allow the U.S. attorney general to immediately block the sale of a weapon.

Attempts to bridge partisan differences on gun safety floundered this week, but Murphy said, “If there’s common ground during the weekend, let’s try to find it.”

He also said GOP presidential hopeful Donald Trump’s plan to speak with the National Rifle Association about the “terror gap” legislation might help. But Murphy said Trump has “flip-flopped” on gun safety and “contradicted himself.”

He, and Blumenthal, say that after the slaughter in Orlando, Americans are more supportive than ever to tightening gun regulations.

“Americans wants us to be changemakers and change agents,” Blumenthal said.

VIDEO: A group of Democratic senators was joined at a press conference Thurdsay by relatives of victims of the San Bernardino, California and Charleston, S.C., mass shootings.