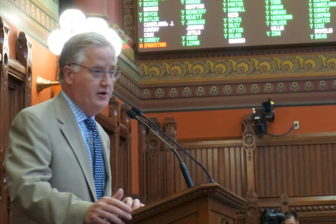 House Speaker J. Brendan Sharkey as the House votes for the first time to override a veto by Gov. Dannel P. Malloy.

In an election-year distancing from a governor whose approval rating recently sank to 24 percent, the General Assembly overrode the vetoes of three bills and sustained five others.

The House was willing to do four more overrides, but the Senate stood with Malloy on the others, including one sought by Comptroller Kevin P. Lembo that would have increased legislative oversight over tax breaks for economic development.

The House voted in rapid succession to override the vetoes of five House bills and one Senate bill. The Senate overrode vetoes of two Senate and two House bills. But an override – technically re-passage of a bill – requires two-thirds votes in both the House and Senate, 101 votes in the House and 24 in the Senate.

House Speaker J. Brendan Sharkey, D-Hamden, who is not seeking re-election, and the man who would succeed him if Democrats retain their majority, House Majority Leader Joe Aresimowicz, D-Berlin, each stressed their chamber’s willingness to act independently of the governor.

“I think it does say we maintain an independence from this governor, from any governor, as a legislature,” Sharkey said. “We reserve the right to take steps we feel we need to take to preserve the policy initiatives that we passed originally.”

“Today we took the important steps to show our independence from the governor’s office on issues that we feel are important to the people of Connecticut,” Aresimowicz said.

Senate Democratic leaders said little of why they sided with Malloy against the House on some bills, focusing instead on the overrides.

“I think that, given the fact that these bills passed by overwhelming margins, the legislature made the statement on these that it had an interest in these,” said Senate President Pro Tem Martin Looney, D-New Haven. “I think it was a case-by-case analysis of each bill.” 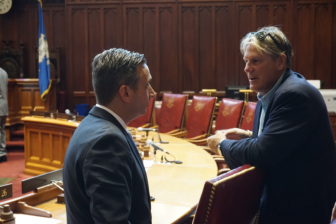 Several of the eight bills the governor vetoed from the regular 2016 session reflected a clash over executive authority and legislative oversight.

The administration downplayed the overrides.

“While the governor stands fully behind his vetoes, today was part of the legislative process, and we respect that process,” said his spokesman, Devon Puglia.

The bills passed Monday over Malloy’s vetoes, with the override votes:

Malloy said the bill was unnecessary as the administration already was taking steps to remove a vendor accused of failing to serve clients. He also called it “a clear intrusion into the function of the executive branch.

House Bill 5420 allows the state treasurer to hire and set the salary for principal investment officers without permission from the Department of Administrative Services. House, 101-15. Senate, 34-1.

Malloy said the current fiscal crisis, which is forcing layoffs and pay freezes, was no time to allow hiring without executive oversight

Malloy said he supported the bill’s intent, but the language was too broad and burdened state agencies.

Bills that failed Monday after passage over Malloy’s veto in only one chamber:

House Bill 5247 would have implemented recommendations by the legislature’s Auditors of Public Accounts, expanded who must report suspected wrongdoing to the Office of State Ethics and tightened the rules for contracting without competitive bidding. House, 114-3.

Malloy said two sections of the bill “encroach upon the purview of the executive branch of government.”

House Bill 5636 would have extended an apprenticeship tax credit and shifted from the executive branch to the legislature’s Program Review and Investigations Committee responsibility for regularly assessing the state’s economic-development tax incentives. House, 114-2.

Malloy said the bill would have allowed owners or shareholders of S-corporations and limited liability companies to claim an apprenticeship tax credit against their personal income tax. He called the legislature’s takeover of the analysis “unnecessary and unwarranted.”

House Bill 5261 would have exempted coaches and referees who work for other than public school districts from labor rules for purposes of unemployment taxes and compensation. House, 101-15.

Senate Bill 397 would have given municipalities the authority to grant total tax abatements in perpetuity to arts and culture groups, including for-profit entities such as movie theaters. Senate, 25-10.

Malloy said the law already exempts non-profits from paying property taxes on arts and culture facilities. He objected to the inclusion of for-profits.

Neither chamber voted to override one vetoed bill: House Bill 5425, which would have established a framework for non-profits and banks to acquire, remediate and sell environmentally tainted property known as “brownfields.” Malloy said he supported the bill’s intent, but it could have resulted in millions of dollars in lost revenue to the state.