Rich Dusseault already can’t find enough mechanics to service the private planes his high-profile clients bring in, and now the only two schools in Connecticut that train these mechanics have announced they would suspend enrolling new students for the 2016-17 school year. 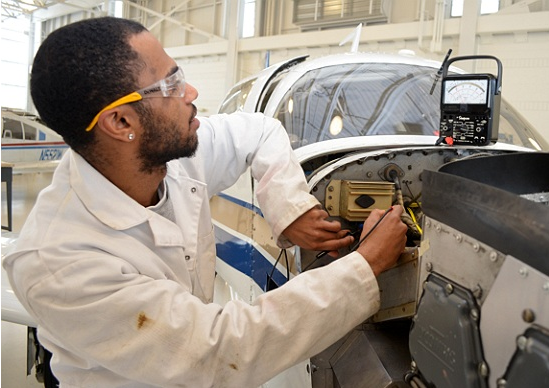 A student works on a plane at CT Aero Tech in Hartford.

“We need certified mechanics to keep the planes flying. These schools were our pipeline,” said Dusseault, the operations manager for Bombardier Hartford Service Center at Bradley International Airport in Windsor Locks. “This is very surprising. I didn’t know we would need to fight for the survival of this pipeline.”

The aircraft mechanics program is one of a number of post-secondary adult education programs run by the state-funded Connecticut Technical High School System, and the cutback is one of a series headed for adult vocational programs as the system retreats from also serving adult learners to one more strictly focused on high-school students.

The State Department of Education, which operates the 20-school system, was unable to say this week how much it will save by downsizing adult education programs.

Dusseault’s facility – which services airplanes for the likes of the Boston Red Sox, Tommy Hilfiger and World Wrestling Entertainment – is the only service center for Bombardier planes on the East Coast.

While the number of planes that need to be serviced grows, he’s not sure where he is going to find mechanics, whose starting salary is typically $50,000.

Nationwide, there is a major shortage of these skilled mechanics, a report commissioned last year by The Aeronautical Repair Station Association and the Aviation Technician Education Council warned.

The Connecticut Department of Labor estimates that each year the two Connecticut schools – CT Aero Tech in Hartford and the Stratford School for Aviation Maintenance Technicians – graduate 28 people, while it projects businesses in the state are looking to fill 111 openings. In Connecticut, commercial and private airports and businesses that service planes for shipping companies all are dependent on this pipeline.

The decision to stop taking new students came without warning for many of the teachers and students.

On Friday afternoon, the superintendent of the state-funded school system sent an email to school officials directing them to inform the 32 students already accepted into the program for the fall that they would not be admitted.

While the superintendent wrote that no decision had been made to permanently close the programs when existing students graduate in December 2017, some staff see this as a precursor to a full closure. The state spent $10.3 million in 2009 to open a new facility for CT Aero Tech at Brainard Airport in Hartford.

“Funding will end at some point in 2017,” Charles Hilton, the head of the aviation department at CT Aero Tech wrote in an email to dozens of businesses and supporters on Tuesday. “Some of you have been down this road with us before. Our past experiences have proven that if the program is going to continue, you the graduates, employers and fellow airmen are going to have to come together to educate our elected officials, members of the State Board of Ed, the governor and CTHSS administrators as to why this is a bad idea.”

Kelly Donnelly, the chief of staff to the state education commissioner, said the decision not to accept any new students for the next fiscal year was a difficult one, but necessary given that the federal government will no longer allow students who attend these post-secondary adult education programs to receive federal financial aid.

Only six of the 50 students that attend the program in Hartford use federal Pell Grants to pay the $3,500 in tuition. The school’s annual budget is $1 million. The education department could not say how many students at the Stratford school were receiving Pell grants.

“The loss of the federal funding is challenging, and that’s why we are trying to find a solution or remedy for those specific programs,” said Donnelly during an interview. “The technical high school system does not meet the criteria to be an eligible postsecondary institution for Pell Grants. It’s core function is to serve as a high school system, not to serve as a postsecondary institution.”

The department was unable to provide how much in federal funds these two programs are losing and how much the state would save by closing them. The system, they said, is slated to lose $800,000 next fiscal year in federal funding because of the financial aid changes.

The adopted state budget cut $7.8 million from the technical school system, one of the larger cuts in the budget, nonpartisan fiscal analysts report.

Last month, the governor’s budget office announced that several adult education programs at five schools would be closing and 13 state employees would be laid off as a result.

All of these positions are in high demand.