Malloy, Fasano challenge each other on fundraising issues 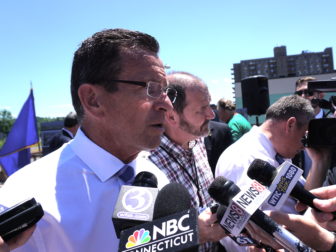 Gov. Dannel P. Malloy, whose Democratic Party just reached a record $325,000 settlement to resolve allegations of improper fundraising, exchanged jabs Tuesday with Republicans over whether the Democrats owe voters the release of emails and documents related to the allegations.

The settlement ended a fight with the State Elections Enforcement Commission over an investigative subpoena demanding internal documents related to the solicitation of state contractors for contributions used to support Malloy’s re-election in 2014.

“Gov. Malloy should stand up to his party and demand they do the right thing and release the emails immediately,” said Senate Minority Leader Len Fasano, R-North Haven, in a statement issued with Sen. Michael McLachlan, R-Danbury. “The litigation is now over, so the state Democratic Party does not have to worry about further action being taken against them in this case.”

Speaking to reporters after an unrelated event, Malloy continued to keep his distance from a case that revolved around a conflict in state and federal campaign finance laws that Democrats exploited in 2014. Using a federal account, Democrats accepted contributions from state contractors, who are barred by state law from donating to campaigns for state offices.

“By having the emails in hand, lawmakers could continue the fact-finding so that we can close the perceived ‘loophole.’ Releasing these emails will provide us with the whole picture, so that we as legislators can determine what legislative changes we need to prevent the same violation from occurring again,” Fasano and McLachlan said.

Malloy noted that the Democratic Party agreed as part of the settlement to new accounting rules and other restrictions intended to keep campaign money prohibited by state law out of state campaigns. It also dropped its claim that federal election law pre-empts the commission from issuing subpoenas to investigate alleged potential violations of state elections law.

““I have tried to stay out of this discussion to the greatest extent possible,” Malloy said. “Clearly, an agreement was reached between the party and SEEC. I have yet to hear Republicans say that they’re gong to abide by the same set of rules.”

Malloy did not directly answer when asked if the party’s decision to use prohibited contractor contributions, even though legal under federal law, undermined state law and the state’s Citizens’ Election Program, which provided his campaign with $6.5 million in public financing.

“I think what people are charged with are living within the laws as they exist, and there were conflicts in the laws which quite frankly should have been worked out beforehand, but were not,” Malloy said.

Meanwhile, a spokesman for the Democratic Party defended the right of its chairman, Nick Balletto, to authorize the settlement without a vote of the Democratic State Central Committee.

Jason Bartlett, a committee member, complained in a letter to other members that Balletto should have consulted with the panel. He did not object to the terms of the settlement.

Leigh Appleby, a spokesman for the party, said the party chairman does have the authority, but he also has “consulted a panel of DSCC members and continues to be in touch with anyone with questions regarding the settlement.”

“We continue to believe that this settlement is in the best interest of the state of Connecticut and the Democratic Party,” Appleby said. “After tough negotiations, we were able to clarify a fundamental conflict between state and federal law and ensure the continued viability of the Citizens’ Election Program.”