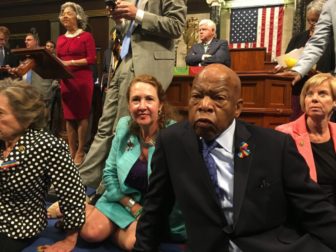 Washington — House Republicans pulled the plug on a revolt by Democrats led by Connecticut Rep. John Larson and civil rights icon Rep. John Lewis by adjourning in the middle of the night for the long July 4th break.

Larson and a group of about 20 Democrats, including all of Connecticut’s House lawmakers, seized control of the chamber Wednesday morning and said they would not relinquish it until GOP House leaders allowed votes on gun safety legislation.

But House Speaker Paul Ryan, who called the Democratic sit-in on the House floor “a publicity stunt,” was not moved. He scheduled key votes on bills that would fund the U.S. response to the Zika virus and military construction next year for 2:30 a.m., then adjourned the House for the holiday two days before it was scheduled.

The  move to adjourn the House until July 5 angered the protesting Democrats, who cried out “coward,” “shame, shame,” and continued their chant of “No Bill, No Break.”

Minority Leader Nancy Pelosi said the GOP “cut and ran in the dark of the night.”

“They cut short the session by two days because they didn’t want to give us a vote,” said Rep. Rosa DeLauro, D-3rd District, who spent the day in the well of the House on crutches. DeLauro suffered a hairline fracture in her knee when she fell off a ladder moving into a new apartment in New Haven a couple of weeks ago.

Walking off the House floor after 16 hours of managing the debate, Larson said lawmakers in the minority had never seized the chamber in that manner. He and other Democrats vowed to continue the protest when Congress reconvenes.

Lewis said, “When we come back on July 5th, we do it all over again. The American people want us to act.””

A handful of Democrats continued to talk about the need for a vote on gun control measures Thursday but ended their sit-in shortly after 1 p.m.

The sit-in drew hundreds of protesters to outside the U.S. Capitol, where they chanted, “We will remember in November.”

The visitors galleries also were packed with supporters of the Democratic effort. They included Nicole Hockely, mother of slain Sandy Hook Elementary School first-grader Dylan Hockley. She said she had planned a trip to Washington Wednesday and came to the U.S. Capitol when she learned of the sit-in.

“This is amazing,” she said.

The Democratic insurgents repeatedly demanded a vote on the “terror gap” bill. They also were seeking a vote on a bill that would extend FBI background checks to gun shows and individuals selling firearms over the internet.

“Give us a vote, just like Senate Majority Leader Mitch McConnell gave the Senate a vote,” Larson said. “You have the opportunity to let America know where you stand.”

Sen. Chris Murphy led a filibuster of nearly 15 hours last week to pressure Senate GOP leaders to hold votes on gun control. The measures failed to win 60 votes needed for approval, but opened the door to further debate and a possible compromise in the Senate. 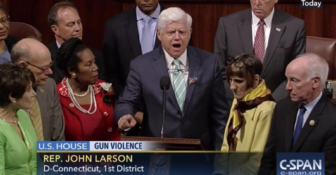 One after another, lawmakers took turns deploring what they said is an epidemic of gun violence, listing mass shootings in Newtown; Charleston, S.C.; San Bernardino, Calif.; and most recently Orlando, Fla., where Omar Mateen killed 49 people on  June 12. Many told stories of individuals in their districts – some of them children – killed as innocent victims of gun violence.

Lewis, who once was brutally beaten during a march over the Edmund Pettus Bridge outside Selma, Ala., said that for several sessions of Congress he wondered what would prompt the House to take action on gun control.

“The bipartisan solutions are pushed aside. They are beaten down and obstruction is praised. Newtown, Aurora, Charleston, Orlando. What is the tipping point? Are we blind?” Lewis asked. “We can no longer wait. We can no longer be patient. So we ask the well of the House to have the need for action. Not next month, not next year, but now.”

The Democratic protest began at 11:25 a.m. The House went into recess, so microphones were off, and so were the House-controlled cameras providing the C-SPAN video feed that would have allowed the public to witness the protest. 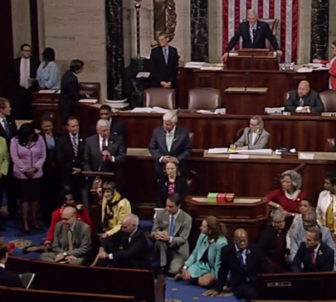 The entire Connecticut delegation on the House floor.

The mics have been cut,” Larson said. “They aren’t going to be able to silence us, or shut us down.”

Democrats began insisting on Tuesday that the House stay in session until gun control legislation receives a vote. In the minority for years, they maintain there are enough like-minded Republicans in the chamber for gun control bills to win approval – if Republican House leaders allow a vote.

No Fly, No Buy

Ironically, the Democratic lawmakers were seeking a vote on a bill sponsored by a Republican, Rep. Peter King of New York. Known as the “No Fly, No Buy” bill, it would close the so-called “terror gap” that allows those on a federal terrorist watch list to buy weapons. A similar measure failed in the Senate on Monday. So did legislation that would expand FBI background checks.

With C-SPAN unable to use the House cameras to broadcast events on the floor, lawmakers took to social media to post photos and video of the sit-in, which C-SPAN and other television channels then broadcasted. (See Rep. Scott Peters’ Periscope video feed below.)

Like Murphy’s filibuster, the sit-in riveted the U.S. Capitol and caused a social media firestorm.

Rep. Joe Courtney tweeted, “Rep. John Larson continues to serve as the ‘speaker’ of our sit-in while HouseGOP continues to abdicate their role.”

Rep. Jim Himes, D-4th District, said, after the mass slaying in Orlando, “This is a time of moral clarity.”

“Other members who have been here for decades say they have never seen anything like it,” she said. “But there’s a tradition of civil disobedience in this country.”

Larson reached out to a group of lawmakers, including fellow Connecticut Democrats to help launch the sit in.

Esty said when he reached out to her, she told him, “Tell me when and where.”

Murphy was one of the first senators to migrate to the House floor, arriving to cheers. He shook hands, patted backs and gave Himes and other protesters fist-bumps.

Also visiting the House were Sens. Richard Blumenthal of Connecticut and Cory Booker of New Jersey, who both helped Murphy with his filibuster.

“I was proud to walk over and join my colleagues in the House – led by Congressmen John Lewis and my fellow members of the Connecticut Congressional delegation – today in demanding action,” Blumenthal said in a statement. The House sit-in is a powerful demonstration of our responsibility not to give up.”

“Enough is enough,” Malloy said in a statement. “We recognized that enough was enough in Connecticut, and our Congressional delegation realizes it in Washington.”