Comptroller says Wade should recuse herself on Cigna merger 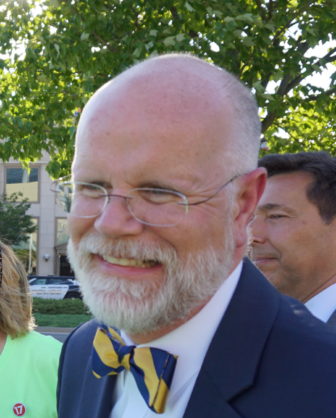 Comptroller Kevin P. Lembo publicly urged Insurance Commissioner Katharine L. Wade on Thursday to recuse herself from Connecticut’s review of the Anthem-Cigna merger, saying even a positive legal ruling from ethics officials would not overcome the appearance of a conflict of interest.

“At present, I do not believe the current review process will ensure an unbiased decision based on the facts,” Lembo told Wade in a letter released to reporters. “The strong ties between you as the regulatory authority and one of the merger applicants, combined with the secretive nature of the proceedings, at the very least, create the appearance of a favored outcome.”

Wade is a former Cigna official whose husband still is employed there as an attorney.

Lembo is the highest-ranking elected official to join a chorus of consumer and advocacy groups that oppose both the merger and Wade’s role as the lead state regulator. At the request of Common Cause, the state Citizen’s Ethics Advisory Board has agreed to issue a binding declaratory ruling on whether Wade has a conflict under state law.

But Lembo indicated that even a finding of no legal conflict would not resolve all questions about Wade’s role.

“In the Department’s review of the Anthem-Cigna merger the process by which the final decision is reached is at least as important as the decision itself,” Lembo wrote to Wade. “Eliminating any real or perceived conflicts of interest by recusing yourself from the review process and providing as much transparency and public access to documents and details related to the review would greatly strengthen public confidence in the proceedings.”

An insurance department spokeswoman said the commissioner has made clear she will abide by whatever guidance she gets from the Office of State Ethics and the advisory aboard.

“What is disappointing, however, is that the comptroller never picked up the phone to discuss the issue with the commissioner directly and instead issued a letter and press release largely based on media reports,” said Donna Tommelleo, the spokeswoman for the department.

Lembo said in a telephone interview he has previously shared concerns about the merger with Wade by letter, without publicity.

Lembo, who plays a role as comptroller dealing with Cigna and Anthem as an administrator of benefits for state employees, says he has not taken a position on the merger, but he raised concerns about the market impact of the second- and fourth-largest health insurers becoming one company.

“We are a very large customer in this market,” Lembo said. “We contract with both these companies. It really is a concern.”

“The state’s independent Office of State Ethics must be allowed to do its job and complete its work,” Looney said, adding that legislators could hold a hearing if ethics officials need help. “Certainly, another option would be that Commissioner Wade voluntarily recuses herself for the remainder of the process.”