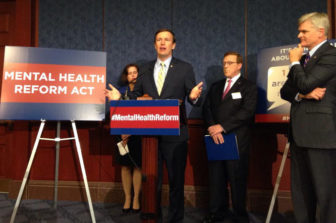 Washington – As the U.S. House of Representatives passed an overhaul of federal mental health policy on Wednesday, Sen. Chris Murphy pressed for a Senate vote on a similar bipartisan bill he has sponsored with Republican Sen. Bill Cassidy of Louisiana.

“The House took an important step today to expand treatment and prevention programs for the 44 million Americans battling mental illness,” said Murphy and Cassidy in a joint statement. “The bill voted on today isn’t perfect, but the fact that it passed overwhelmingly is proof that there is broad, bipartisan support for fixing our broken mental health system … We urge Senate leaders to take action and make this issue a priority before the 114th Congress comes to an end.”

On a 422-2 vote, the House approved a bill sponsored by Rep. Tim Murphy, R-Pa., a clinical psychologist who had been tapped by GOP leaders to investigate mental health treatment in the wake of the Sandy Hook shooting in December of 2012.

Murphy determined “federal policy has been a failure, an unmitigated disaster.”

His bill would require the Secretary of Health and Human Services to modify regulations concerning medical record secrecy in cases of serious mental illness to provide family members with information to help the sick. The bill also would reauthorize mental health grants for states and drop some restrictions on patient advocacy groups.

The bill also would require private insurers to cover mental health care on an equal footing with physical illnesses.

Chris Murphy’s bill has similar provisions, but has been stalled because Senate Democrats reject one provision Sen. John Cornyn, R-Texas, wants to include that would allow the mentally ill to regain their Second Amendment right to purchase and possess firearms after they are treated.

Under current federal law, those who are involuntarily committed to a mental institution are barred from purchasing a gun. Cornyn’s provision also would clarify which mental health records states must send to the National Instant Criminal Background Check System, a system run by the FBI that screens prospective gun purchasers.

The House-approved mental health bill nearly became a victim of a Democratic campaign to force votes on gun control legislation in the House of Representatives.

The bill was discussed during a meeting Tuesday evening between House Speaker Paul Ryan, R-Wisc., and  Reps. John Larson, D-1st District, and John Lewis, D-Ga., leaders in a revolt that included the seizure of the House floor last month.

Larson said Ryan asked him if Democrats would derail the mental health bill to put pressure on GOP leadership to allow votes on gun control legislation. Democrats are pushing for votes on a “terror gap” bill that would bar those on the federal terrorism watch list from purchasing weapons and another provision that would expand background checks of gun buyers.

Larson said he told Ryan he would consult with other Democrats. Some wanted to hold the mental health bill up as a “political hostage,” but a consensus was reached that “in the midst of this crisis, there ought to be room to show bipartisanship,” Larson said.

House Democrats continued their push for votes on the gun bills Wednesday with press conferences with victims of gun violence and a steady stream of speeches on the House floor.

Plans to hold a vote on a GOP alternative that would establish a three-day waiting period for people on the terror watch list to buy a gun, during which the government could go to federal court and seek an order to block the sale, were put on hold Wednesday.

The plan was for the gun provision to be voted on as part of an anti-terror package. But conservative Republicans raised constitutional concerns about some measures in the package.