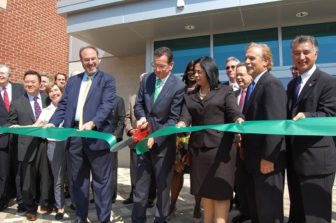 Gov. Dannel P. Malloy cuts the ribbon at JM Wright Technical High School in Stamford, which the state spent millions to renovate. While bonding for capital projects is often popular, bonding for other purposes, such as covering operating costs in the state budget, is increasingly controversial.

Today’s meeting of the State Bond Commission could offer a preview of one of the key issues Republican legislators plan to campaign on this fall: Connecticut’s escalating debt.

If the commission — which is chaired by Gov. Dannel P. Malloy and whose agenda is set by his budget office — endorses the $188 million in borrowing on its agenda, Connecticut will be on pace to approve $2.1 billion in general obligation bonds so far this calendar year.

That’s three-quarters of the $2.7 billion “soft” limit Malloy set earlier this year, a limit that already has nearly doubled in four years.

Already one of the most indebted states in the nation, Connecticut — the GOP message goes — quickly is borrowing itself into a crisis.

“Despite all their talk about new realities, the mindset of Connecticut Democrats has not changed when it comes to bonding and managing state debt,” said Senate Minority Leader Len Fasano, R-North Haven. “They are still borrowing uncontrollably, adding more burdens to taxpayers and our children for generations to come.”

But Republican legislators rarely, if ever, vote against borrowing when it is for projects in their own districts, Malloy and his fellow Democrats in the legislature respond. And the GOP also has not been quick to suggest major reductions in municipal school construction — the single-largest purpose for which general obligation bonds are issued.

General obligation bonds are repaid with resources from the state budget’s General Fund. This fund includes income, sales and corporation tax receipts, funds generated by several other minor taxes, gaming proceeds, several categories of federal grants, and revenues from various fees. Those funds are used for municipal school construction, many capital projects at public colleges and universities, state building maintenance and renovations, open space and farmland preservation, and various smaller projects. The bulk of transportation improvements are financed with a different type of bonding and paid off with fuel tax receipts.

“The hypocrisy here is truly painful to watch,” Malloy spokesman Chris McClure said. “It so purely demonstrates the divide between words and actions in a way that makes even the casual observer cringe.”

McClure noted that since the governor took office in 2011, “over countless meetings and agendas,” the ranking Republican senator on the Finance, Revenue and Bonding Committee — who also gets a seat on the bond commission — has voted against one project. “… Clearly, there are Republican words – and then there are Republican actions.”

Unlike the state budget, which follows a July 1-to-June 30 fiscal year, bonding is tracked on the calendar year.

And shortly after a new cycle begins, the governor issues a “soft bond cap” — an estimate provided to Wall Street credit rating agencies of total general obligation bonding likely to be issued over the year.

Malloy, who has grappled with a sluggish state economy throughout most of his administration, has raised that cap considerably since he took office, and also struggled at times to remain under it.

The state borrowed $2 billion in 2014, blowing a $1.8 billion cap. Connecticut finished just barely below the cap last year, but only after increasing it by 40 percent, to $2.5 billion.

Still, McClure notes that the state has taken advantage of remarkably low interest rates for several years now, and the majority of the financing is used for construction projects that create jobs and bolster the economy.

Connecticut also is more generous than most other states in assisting municipalities with school construction, and lacks county government — two factors that drive up bonded debt at the state level.

But Republicans counter that Connecticut under Malloy’s leadership has used its credit card increasingly to cover operating costs.

Last fiscal year’s state budget assumed close to $160 million in borrowed funds would be used to cover other debt payments, and a similar approach was taken this fiscal year.

Connecticut traditionally has borrowed to fund incentives to companies looking to leave the state, or to encourage them to expand. But GOP lawmakers say this is becoming increasingly common as the state’s economic recovery progresses slowly.

And in the last two years of Malloy’s first term, leading up to the 2014 gubernatorial election — which Malloy won by defeating Greenwich Republican Tom Foley — the governor and the legislature’s Democratic majority moved hundreds of millions of dollars of operating expenses onto the credit card to avoid pre-election tax hikes.

This included refinancing debt to push $392 million in payments owed then until after the election, plus about $40 million in interest.

“I understand the desire to fund as many community projects as possible,” Fasano said. “But when we are already being drowned by debt and making tough budget choices, we have to ask ourselves the question: are these needs or are they wants? For every ‘want’ that gets funded with borrowed money, it becomes that much tougher to fund core ‘needs’ in future years. Far too many of these programs getting bond money are not necessities. A bronze statue in Hartford is a want … and donations to private entities that already have other significant funding sources are all wants, not needs.”

The statue Fasano referenced involves a $250,000 grant to the city of Hartford to build a bronze statue of Walter “Doc” Hurley, a local sports legend who died two years ago. A high school administrator, Hurley also ran a scholarship program for local students.

McClure responded that, “We will no doubt see Republican press releases blasted out celebrating projects in their districts as they set dates for ribbon cuttings, even as they seek to decry borrowing in general. Perhaps Senator Fasano would like to return the needed $500,000 to his district for bleachers and a snack shack that he applauded in October. Clearly, Senator Fasano did not deem the bonding for his own district excessive.”