The proposal urges the creation of a new super-agency of sorts – the Connecticut Health Authority – that would absorb the responsibilities of more than a half-dozen existing state agencies. It also would create a quasi-independent oversight agency – the Office of Health Reform – with broad powers to track and limit health care cost increases in the state.

Further, the plan calls for incentives to increase networking between providers of health care services, from small-town doctors to the state’s largest hospitals, that would allow the state to implement value-based payments in the Medicaid program and state employee benefits program instead of the existing fee-for-service structure. This means health care providers would be paid based on the quality of care they provide rather than flat rates for services.

The details of the plan were revealed at Tuesday’s meeting of the Health Care Cabinet, an advisory group of health care professionals, experts and stakeholders who provide guidance to the governor and lieutenant governor on health care reform. Under a major health initiative signed into law last year, the cabinet has been tasked with studying health care cost containment models in six states – Massachusetts, Maryland, Oregon, Rhode Island, Washington and Vermont – and developing a plan to stem rising costs in Connecticut.

The cabinet hired Massachusetts-based Bailit Health Purchasing to present a preliminary proposal – a so-called “straw model” – on how to achieve the major cost-containment goals stipulated in the law.

Some members of the cabinet expressed concerns about various elements of the wide-ranging plan, but others saw its components as viable reforms worth considering.

“What I like about it, as a package, is that it’s first, consumer-focused, and second, data-driven,” said Bob Tessier, executive director of the Connecticut Coalition of Taft-Hartley Health Funds. “The benefit of … the state agency restructuring and the creation of the Connecticut Health Authority is that for the first time it would allow for, and in fact mandate, real planning and coordination and accountability measurement.”

But not all members of the cabinet were as enthusiastic as Tessier, though he had reservations as well.

Anne Foley, a representative from the governor’s budget office on the cabinet, said she doubted whether one unified health agency would serve consumers as well as the existing array of smaller agencies.

“I think there are legitimate concerns being raised, but I’m not sure consolidation and reorganization is exactly the way to go,” Foley said. “A concern that I see with a number of the recommendations here is that there are costs associated with implementing these.”

Bailit Health said its proposal meets all seven benchmarks. Members of the cabinet will deliberate and meet again in August to begin drafting their proposal. The cabinet plans to finalize its recommendations in September and approve a final report in November, before its Dec. 1 deadline.

The Bailit Health plan would completely restructure the health care system for Medicaid recipients and state employees in Connecticut, starting with an incentive to change the way providers network with each other and receive payments.

Bailit Health’s proposal calls for creation of what it calls “consumer care organizations” – networks of health care providers, including doctors, hospitals, long-term care facilities and other services. Each consumer care organization would receive large payments based on the total number of customers using the services in its network, which would then be distributed to the individual providers. 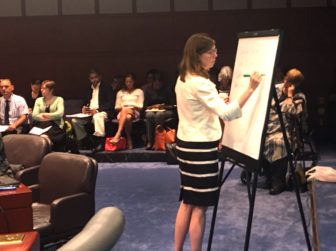 Consultant Megan Burns of Bailit Health writes on a sketchpad during a discussion with the Health Care Cabinet.

Health care providers in consumer care organizations would be paid based on the quality of their care instead of the flat-fee system that exists now. Bailit Health suggested that between 2 percent and 5 percent of payments be tied to a standard quality-of-care measurement. That portion would be withheld if the standard were not met.

The model is similar to accountable care organizations, which are available to those receiving Medicare.

Without rate increases, providers choosing not to join would probably have greater difficultly covering their operating expenses, which, in turn, could lead to cost increases for all consumers using those services.

But Bailit Health officials conceded all this consolidation, if left unchecked, would lead to greater cost increases and cause additional market concentration in Connecticut.

The solution they proposed is a new oversight agency that could control the costs: the Office of Health Reform.

While Bailit Health officials did not specify how its leadership would be determined – similar models in other states are run by gubernatorial appointees – they did say the entity could exist technically independent of the executive branch, a structure described as “quasi-independent.”

The Office of Health Reform would be a hub responsible for gathering data from all state agencies and health care providers. With legislative approval, it would use that data to create, implement and track a new cap on cost increases.

Connecticut would not be able to accomplish the proposed Medicaid reforms without federal permission, however.

Bailit Health’s plan would require the state to apply for a 1115 Medicaid waiver from the U.S. Department of Health and Human Services. Such waivers allow  states to create experimental systems for providing health care to Medicaid recipients – in this case, the consumer care organizations and proposed payment structure.

The waiver also would open the door to federal funds to pay for improvements to accommodate the reforms. The amount of grants in recent years have ranged from $30 million for New Mexico to $11.4 billion for Texas.

If the Office of Health Reform is going to be able to collect accurate data, it will need assistance from the state attorney general’s office, Bailit Health said.

Bailit Health proposes expanding the attorney general’s subpoena powers to include the ability to obtain confidential information from plans and providers. This would ensure the new oversight agency has all of the data it needs each year when analyzing trends.

But Bailit Health officials argued that health care is not operating as a free market, making these additional measures necessary. They said total transparency is the only way to get to the “root causes” of cost increases.

The new subpoena power would have to be granted by the legislature. In addition, Bailit Health said, the attorney general’s office would need added resources to handle requesting and processing the data.

The Bailit Health proposal also would have sweeping consequences for the structure of state government. 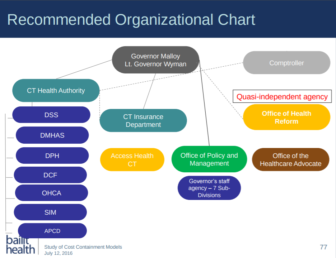 The plan calls for eight state agencies to be merged into a new super-agency, the Connecticut Health Authority:

To what extent the agencies maintain their former identities would be at the discretion of state officials.

The new health authority would be responsible for all state health policy and purchasing activities. Bailit Health says this will create “a unified, trusted voice” in the state government on health care issues.

While the authority would not have control over state employee health plans, it would work closely with the comptroller to make the best decisions for state employees.

Bailit Health also believes the legislature should pass a bill to require all coverage decisions for state agencies to be based on “scientific evidence” to create further cost savings.

Tuesday’s discussion found some consensus among cabinet members, but a number of concerns were raised about the feasibility of the proposal as a whole.

Members agreed, however, that many elements were worth consideration and could form the foundation of the cabinet’s eventual proposal to the state.

Access Health CT CEO Jim Wadleigh said inter-agency collaboration is already resulting in cost savings. He said his agency – the state’s health insurance exchange – has been meeting biweekly with the Department of Social Services, Department of Children and Families, Department of Administrative Services and the governor’s budget office.

These meetings, he said, could be considered a pilot program for the benefits that could arise from additional collaboration and could serve as an alternative to a complete restructuring of the state’s agencies.

And most members seemed skeptical that restructuring the agencies would be the best approach.

“I think that there are a number of ways in which a concerted, organized effort can be performed without a restructuring of agencies, although I’m not dismissive of such a suggestion,” DSS Commissioner Roderick L. Bremby said. “And unless the solution is designed for the problem you’re trying to solve, you may consume a lot of time and energy and not have beneficial outcomes.”

Ellen Andrews, executive director of the Connecticut Health Policy Project, expressed a number of reservations about the proposal. She said it would cost far too much to implement and that some of the mechanisms it uses to make the restructuring possible raise some red flags – specifically, the 1115 Medicaid waiver.

Andrews said some other states that have used the waiver have seen negative results. Instead of a major overhaul, she said, “baby steps” are the best course of action.