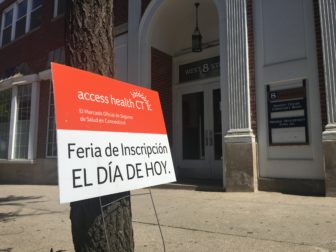 A sign outside the women’s center in Danbury directs Access Health CT customers to the first transition enrollment fair.

Over the last two weeks, Connecticut’s health insurance exchange has helped another 1,400 low-income individuals transition from their state-sponsored Medicaid plans as they prepare to lose them after July 31.

The state’s health insurance exchange, Access Health CT, says 3,544 parents set to lose their coverage – almost 26 percent of those affected – have now enrolled in new plans on the exchange. This total amounts to about two-thirds of all individuals who enrolled in new plans in June, indicating a faster pace in July.

“Every person who signs up for a new plan we consider a success, and we continue to see more (affected) individuals enroll every day,” Access Health CEO Jim Wadleigh said. “This means our outreach is working.”

Last week, the exchange said 52 individuals who were already enrolled in new plans learned they would have to search for an alternative. Those individuals had selected coverage from HealthyCT, the state’s health insurance co-op. The state Insurance Department deemed the co-op “financially hazardous” on July 5 and is blocking it from issuing any new plans to consumers.

Access Health has pushed aggressively to enroll as many individuals losing coverage as possible.

Notices and postcards were mailed to all 13,811 parents and caregivers affected. Emanuela Cebert, the exchange’s outreach director, said Thursday the mailings have resulted in about 6,600 calls. In addition, the exchange has placed about 9,000 phone calls to those still not enrolled.

To accommodate higher call volume, Access Health announced last Friday it would keep its call centers open on Saturdays from 10 a.m. to 2 p.m. through the end of July.

The exchange also organized seven transition enrollment fairs across the state, though the early fairs were sparsely attended.

Officials announced Thursday that a second fair in Norwich would take place on Saturday. They also said two more fairs would be added on July 30 in Hartford and Bridgeport. Unlike the previous fairs, these three will take place on a Saturday. Earlier fairs were scheduled on weekdays.

Correction: An earlier version of this story erroneously said those enrolling in new HUSKY plans would have to pay premiums. Only a small number of those on HUSKY C have premiums while the rest of the HUSKY plans do not.