CT GOP delegates, this meal is brought to you by… 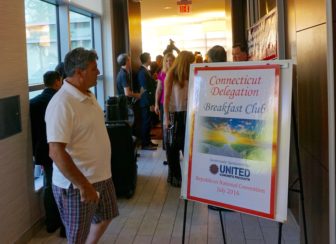 Cleveland — The daily breakfast buffet for the Connecticut delegation to the Republican National Convention is courtesy of United Concrete Products of Wallingford, a state contractor. An afternoon cruise Wednesday aboard the Goodtime III was paid for by the Mashantucket Pequots and Mohegans, two tribes trying to win legislative approval to jointly develop their first casino off tribal land.

But one of the more striking aspects of the wining and dining going on here is how little is being picked up by the major corporations that once routinely underwrote the care and feeding of delegates to the Democratic and Republican national conventions, sponsorships that have grown less attractive in an era of tighter ethics rules and polarized politics.

The rhetoric of Donald J. Trump inspired a campaign by liberal advocacy groups to pressure corporate sponsors not to contribute to the RNC’s host committee. Wells Fargo, UPS and J.P. Morgan are among the underwriters of the GOP’s 2012 convention who are sitting out the festivities at the Quicken Loans Arena in Cleveland.

Individual delegations like Connecticut’s also have felt the pinch, whether related to Trump, tighter budgets or a reappraisal of the costs and benefits of picking up the tab for entertaining politicians and their supporters. Democrats say some of their past sponsors are staying away from their convention next week in Philadelphia.

Diageo North America, the alcoholic-beverages company based in Norwalk, and Pfizer, each paid $5,000 fines to resolve allegations they violated state ethics laws by failing to disclose expenditures made hosting two receptions attended by public officials at the 2012 Democratic National Convention in Charlotte, N.C.

Pfizer is sponsoring a breakfast in Philadelphia, but Diageo is not paying to entertain Connecticut delegates in Philly or Cleveland.

A solicitation to potential sponsors from the Connecticut Republican delegation offered nine opportunities, starting in the morning with “The Breakfast Club” at an estimated cost of $5,000 and ending with “After Hours/Post-Session ‘Late Nights,’” details and costs to be determined. A private dinner Wednesday night at The Chocolate Bar was estimated at $7,500. A post-session, opening night party at a bowling alley was pegged at $5,000.

The only sponsors to sign up were United Concrete, the two tribes, Manafort Brothers and Beirne Wealth, a Milford consulting firm whose services include the management of municipal pension funds. The tribes also are sponsoring a breakfast in Philadelphia for the Democrats. 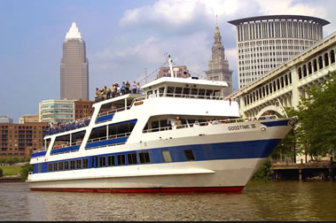 The Goodtime III on the Cleveland waterfront.

With the Diageo and Pfizer cases in mind, the solicitation that went to lobbyists and businesses assured potential donors that the State Elections Enforcement Commission confirms that events hosted by private companies at the convention are not subject to campaign finance laws.

Benjamin Proto of Stratford, a Trump delegate and lawyer advising the state party, said the GOP vetted the names of the 28 delegates, 25 alternates and about 50 credentialed guests with the Office of State Ethics to confirm who is covered by the state gift rules. Seven state legislators are members of the delegation, as well as a handful of state employees and municipal officials.

Michael Mandell, the executive director of the Connecticut Democratic Party, said, “What we’re doing with all our elected officials is reminding folks on the state and federal side, they have to pay attention to ethics guidelines and campaign finance guidelines.”

Peter Smith, a lobbyist for the Mohegan Tribe, dispatched his son, Michael, also a lobbyist, to Cleveland for one reason: To check the guest list and report the attendance of any official covered by the ethics code.

“Compliance with the ethics law is vitally important,” said Smith, a former Democratic state legislator. “We want to make sure we identify everyone who is reportable and we follow the procedures.”

The Mashantucket Pequots, the owner of Foxwoods Resort Casino, know the price for failing to report expenditures on public officials.

Proto said both parties are eager to avoid a repeat of those cases or a similar incident involving ESPN, which exceeded the gift limit and failed to report spending on 22 public officials at the 2000 Republican National Convention in Philadelphia.  It paid a $30,000 penalty.

No officials were implicated then or in the 2012 cases involving Diageo and Pfizer. The burden is on the business, if it is represented by a lobbyist, to report the expenditure and notify the official of the cost within 10 days. An official who does not want to accept a freebie can reimburse the company, which would keep their name off ethics filings.

Carol Carson, the executive director of the Office of State Ethics, said every enforcement action is an education for the public and business community. 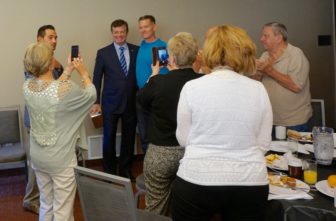 Paul Manafort, the chairman the Trump campaign, was a guest at the Breakfast Club.

“I certainly think the Diageo and Pfizer matters resolved by the enforcement division of the Office of State Ethics put everybody on notice that the law is the law, and the law extends beyond the borders of Connecticut,” she said.

Dwayne Kratt, the director of government affairs for Diageo, did not respond to a request for comment, nor did United Concrete Products.

Even with free dinners and excursions, attending the convention is expensive. In addition to the cost of travel and lodging, members of the delegation pay $1,000 for other activities.

Three of the events for which lobbyists were asked to donate still are freebies, but not through any corporate or lobbyist sponsorship.

A late-night party at the Corner Alley, a new bowling alley and bar near the Connecticut delegation’s hotel, was funded by a political action committee controlled by John Frey and Pat Longo, the state’s members of the Republican National Committee.

A reception Wednesday evening with former U.N. Ambassador John Bolton at The Chocolate Bar, a restaurant near the convention, is being paid for by Steve and Leora Levy of Greenwich. Leora was recently elected to succeed Longo, who is retiring from the RNC.

Before attending the closing night of the convention, the delegates will dine at the Cleveland Natural Botanical Garden, where the featured speaker will be U.S. Sen. Tom Cotton, 39, of Arkansas, who hinted at an interest in running for the White House one day in meeting with delegates from early-voting states.

The tab is being picked up by WWE co-founder Linda McMahon of Greenwich, who spent $100 million of her own money in unsuccessful campaigns for open Senate seats in 2010 and 2012.

The dinners with Bolton and Cotton were private.