Wasserman Schultz is out, Malloy stays on convention roster 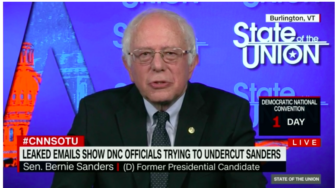 Philadelphia — Connecticut backers of Bernie Sanders applauded the announcement Sunday that Debbie Wasserman Schultz would resign as Democratic National Committee chairwoman in response to the release of internal emails showing the party had worked to hobble Sanders’ presidential campaign.

Gov. Dannel P. Malloy, who had his own high-profile feud with Sanders’ over his ability to impartially oversee the Platform Committee, will address the Democratic National Convention on Monday, the same night Sanders will take the stage in one of the week’s most anticipated speeches.

Sanders’ supporters said Malloy may still hear some boos, but Wasserman Schultz’s appearance would have provoked an uproar, making her resignation unavoidable if Hillary Clinton is going to leave Philadelphia with a unified party.

“”I think it’s a positive step. It’s a good thing she’s not here and she’s not going to be presiding,” said Leo Canty, an early Sanders backer and retired AFL-CIO official from Windsor. “We needed some stronger signals about the desire be unified.”

Wasserman Schultz, a Florida congresswoman, will relinquish her role as presiding officer at the Democratic National Convention that opens here Monday evening to make Clinton the first woman to win the presidential nomination of a major political party. At the close of the convention, she will resign as DNC chair.

“While she deserves thanks for her years of service, the party now needs new leadership that will open the doors of the party and welcome in working people and young people,” Sanders said in a statement.”The party leadership must also always remain impartial in the presidential nominating process, something which did not occur in the 2016 race.”

“She is doing the right thing by falling on her sword, and it will placate the Sanders people a lot,” said Marty Dunleavy, a former Democratic National Committee member from New Haven who helped coordinate the Sanders’ campaign in Connecticut.

“Her stepping down is probably the smartest move on her part,” said state Sen. Gary Winfield of New Haven, a Sanders delegate. “If I were the candidate, I’d want to her to make this decision.”

“This is a step in the right direction,” said Audrey Blondin, a Sanders delegate and Democratic State Central Committee member from Torrington.

A hack of DNC emails showed what Sanders’ supporters long suspected: Wasserman Schultz and her staff discussed ways to disadvantage Sanders, the Vermont senator whose protest candidacy blossomed into a viable challenge. One email indicated DNC staff discussed how to use Sanders’ religion against him in the South.

“There’s just no more deniability about it,” Canty said.

“There is an element of justice being delivered,” said Alan Simon, a Sanders delegate from Windsor.

U.S. Rep. Elizabeth Esty, D-5th District, a super delegate committed to Clinton, said her colleague made the right decision. “I think Debbie has been very good about the party’s interests first,” she said.

Malloy issued a statement Sunday evening that praised Wasserman Schultz for her work for the party but said she was right to step down. “I understand this was a difficult decision, but I believe it was the right one as we work to unite our party to defeat the dangerous, divisive policies of Donald Trump,” he said.

One of the opening night questions revolves around the reception Malloy can expect from Sanders’ delegates when he addresses the convention as the chairman of the Democratic Governors Association.

Malloy also was a lightning rod for complaints that the nomination process was tilted toward Clinton. Malloy, the co-chair of the Platform Committee, was an avid Clinton surrogate whose criticism of Sanders’ mixed record on gun control infuriated the senator and fueled calls for Malloy to relinquish his post.

But Malloy won compliments from the Sanders camp for presiding over an open debate in Orlando, Fla., about the platform. After the meeting, Malloy and Sanders’ top aides met, further defusing tensions.

“The governor has been getting very good remarks and reviews from Sanders’ staff about the way he conducted the Platform Committee,” Dunleavy said. “To the extent people don’t like the platform, he may get some boos, but not directed at him. I understand that Bernie and the governor have had a couple of conversations that went well.”

Malloy could not be reached for comment Sunday to confirm if he and Sanders have talked since the Platform Committee concluded its work. But Malloy’s statement said he was “proud that we have put forward the most progressive and inclusive platform in our party’s history.”

Winfield said he suspects that Malloy, as a visible Clinton surrogate and target of Sanders’ complaints about an unfair Democratic establishment, will get a mixed reception.

“He’s not a figure they are enamored with,” he said.