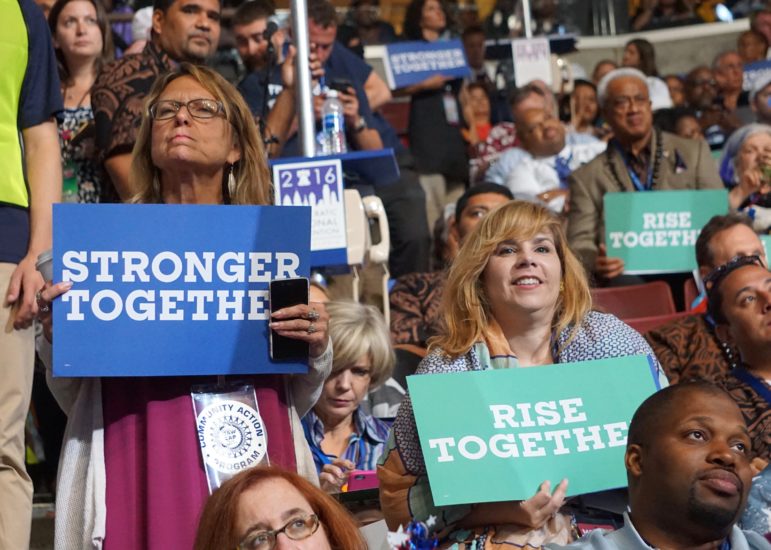 Julie Kusher, left, a Clinton delegate and co-chair of the Working Families Party, is reaching out to Sanders delegates.

Philadelphia — Off the lobby of an airport hotel here, Bernie Sanders delegates from Connecticut talked about life after Bernie. Is there really a movement, a political revolution that can outlive the presidential candidacy of the septuagenarian senator from Vermont?

They are going home to find out if the new voters registered over the past year in places like Norwich and New Britain will stay active, helping to decide if Democrats retain control of the Connecticut General Assembly and re-elect five Democratic congressman and Sen. Richard Blumenthal, all superdelegates who committed early to Hillary Clinton.

The question of whether to vote for Clinton was left to individuals, but the consensus leaving Philadelphia was that nearly all Sanders delegates from Connecticut were ready to support the Democratic nominee, especially if polls showed that Republican Donald J. Trump was competitive in a state that last went Republican in 1988.

“A no vote is not a protest, “ said state Rep. Robyn A. Porter, a Sanders delegate from New Haven. “It is a surrender.”

“For me, it’s an easy decision to know we’ve done everything we can to defeat American fascism,” said Justin Molito of Sherman, another Sanders delegate. “That includes making sure that Donald Trump doesn’t come anywhere near the White House.”

Angie Parkinson, enticed by Sanders into living the lessons she teaches as a social studies teacher from East Hartford, was unenthused by Clinton, but unsure if she could indulge in a protest vote, given Trump’s intolerance toward Muslims and his promise to nominate a Supreme Court justice in the mold of Antonin Scalia, who opposed gay marriage. 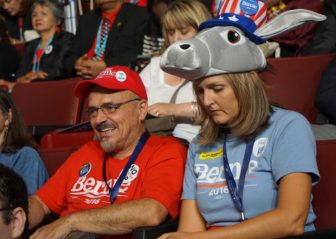 Dan Durso of Windsor said he is not ready to say how he will vote in November, other than he is committed to defeating Trump.

Debra Cohen of Wethersfield, who protested outside the state Democratic convention in May, complaining of how its leadership was arrayed against Sanders, is ready to work within the party after being a Sanders delegate in Philadelphia.

“At this point my personal decision is to stay working within the party and honor everybody who will be working from without the party, because I think we need to make change by squeezing from both sides,” Cohen said. “As far as my voting in November, I wish I had some clue. I honestly don’t. I prefer to be more decisive, but I’m really grateful for the time I have to make an informed decision.”

Marty Dunleavy of New Haven, one of the long-time Democratic insiders who worked for Sanders, said the desire of someone like Cohen to stay involved is an important step. The party needs to convince her and others like her their voices can be heard, that the arc of change is long. 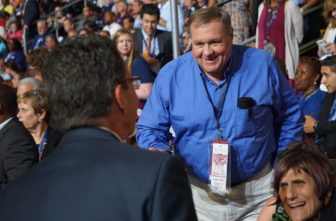 “The next question is how do we keep that energy going?”  Dunleavy said.

In 1984, many in the Connecticut delegation to the Democratic National Convention were outsiders drawn to politics by the nuclear freeze movement and Gary Hart, the Colorado senator who lost the nomination to Walter Mondale. Some drifted away, but others like Roberta Willis of Salisbury ran for office. Willis is retiring this year from the Connecticut House as the influential co-chair of the higher education committee.

Some of the Sanders delegates were long-time activists from the labor movement. The United Auto Workers, a progressive and politically active union, sent four Connecticut delegates to the convention, three for Sanders and one for Clinton.

One Clinton delegate was at the Sanders strategy meeting: Julie Kushner of Danbury, a regional official of the UAW and co-chair of the Working Families Party of Connecticut, a labor offshoot that won passage of a paid sick-day law and a higher minimum wage. 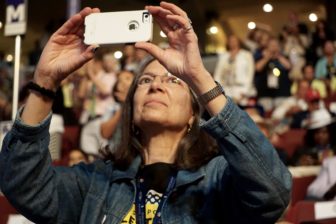 Debra Cohen is certain about staying active, less so about her vote in November.

“I asked if I could sit in. I believe a lot of these issues raised by Bernie Sanders are really, really important to creating a progressive agenda, and I personally want to see that Bernie delegates continue to be involved and hopefully elect more progressive Democrats to all levels of office,”  Kushner said.

Kushner said the Working Families Party is a potential home for the Sanders delegates. It is less an independent party than a wing of the Democratic Party, using its ballot line to cross-endorse candidates who support labor issues, many of which coincide with the issues of the Sanders campaign.

Those include a higher minimum wage and other steps toward reducing economic inequality.

“It’s clear there is a place for the folks that want to move a progressive agenda,” she said.

Beverley Brakeman, a UAW staffer and Sanders delegate, said the delegates agreed to keep talking about how best to push Sanders’ issues.

“We have to listen to everybody and not alienate the people who are really angry. They have a lot of energy. We all care about the same issues,” Brakeman said. “Now is really a critical time. We don’t want the people who walked out the other night to feel alienated from politics.”

U.S. Rep. Joe Courtney, whose eastern Connecticut district voted for Sanders in the primary, said Sanders brought new talent to the party, which was evident when he dropped in on his headquarters in Norwich.

“I was totally impressed with the disciplined and organized way they went about things,” Courtney said.

On the last night of the convention, Parkinson was chatted up by Bridgeport Mayor Joseph P. Ganim, who gave her his card. So did Sen. Chris Murphy, the youngest of the congressional delegation. “He said he wants to meet. He said, ‘I should talk to you guys’,” she said.

Sanders lost, but his people are in demand by the Democratic Party. Parkinson says she has to think about a lot of things, such as how she will vote in November and how involved she will be. But she’s made one decision.

She is going to take the meeting.

Correction: As originally posted this story said Dan Durso’s opposition to Trump meant he was voting for Clinton. Durso declines to say how he will vote in November, other than that he is opposed to Trump.