One-third of high school juniors are not reading and writing well enough to begin taking college courses or start a career, statewide SAT results released Tuesday show. While thousands of those students are close to being where they should be, one out of every six high school junior in Connecticut is significantly behind. 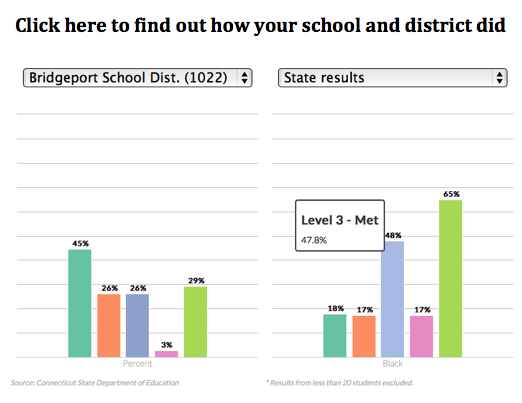 Math results are even more dire – nearly two-thirds are behind and one-quarter of all juniors are significantly behind.

Minorities and students from low-income families were far behind state averages.

Calling it “concerning” that so many students are testing below where they should be, Ajit Gopalakrishnan, the chief performance officer for the state education department, said there is still hope they can catch up.

“We have 12th grade to right the ship, to put them on the right path, position that student for whatever their future might hold,” he said. “Sixty-five percent is good to see. It’s better than 50 percent, right. It’s good to see that we’re at about two-thirds of our students there. We’d like to see more, obviously. And if they’re not there, we’ll be ready to help that kid, that student, to get back on track before they graduate.”

Students are considered college and career ready if they scored at least 480 points out of 800 on the English portion of the exam and 530 out of 800 on math. Students who reached that target have a 75 percent probability of earning a “C” in that subject in college, said Gopalakrishnan.

Students who score below 410 are deemed to have a “minimal understanding” of the content and are considered far behind. In English, that amounts to 18 percent of high school juniors and in math 23 percent.

State Department of Education officials say the results provide an accurate picture of how prepared high school students are for college or a career. Almost 40,000 students took the SAT last school year – a 94 percent participation rate among high school juniors. The previous year, 89 percent of students took the exam.

While many districts had already provided the SAT for free to students, state officials decided last year to require every high school junior to take the exam instead of the controversial Smarter Balanced Assessment.

That move came amid pushback from parents and teachers who said students were being over-tested and large numbers of students were electing not to take the Smarter Balanced exam that the state uses to grade whether schools throughout the state are effective.

Federal law requires that at least 95 percent of students take the exam in order for it to considered a a valid measure of school performance.

Each year, the state releases a 0 to 100 score for each school in the state. The SAT results will account for half of a school’s score. Schools with low participation rates will receive a worse rating. (See the most recent school ratings here)

Those school ratings will not measure or determine whether students eventually catch up, because schools do not measure the scores if students independently take the exam again.