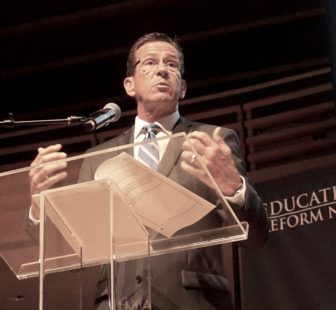 Gov, Dannel P. Malloy was a featured speaker before a charter school group in Philadelphia.

Two national and regional charter school groups have created political action committees in Connecticut in time to make independent expenditures to influence a handful of the 10 Democratic primaries to be held next week for seats in the General Assembly.

Change Course CT, a PAC associated with Democrats for Education Reform, a national group Gov. Dannel P. Malloy addressed during the Democratic National Convention in Philadelphia last week, has polled voters on two primaries in Bridgeport and one in New London.

“We just want to know what the dynamics of the races are,” said Amy Selib Dowell, the Connecticut director of Democrats for Education Reform.

In its filings with the State Elections Enforcement Commission, the group says it is supporting Soto over Hewett, Bradley over Gomes and Stallworth over Pereira. It had reported incurring expenses of about $5,500 as of Wednesday evening.

Charters Care, an affiliate of the Northeast Charter Schools Network, reported spending less than $4,000 on literature and T-shirts promoting Stallworth over Pereira, an outspoken opponent of charter schools, and Rep. Terry Adams of Stamford over Dan Dauplaise. Chris Harrington, the treasurer for the PAC, could not be reached for comment.

In addition to the charter school groups, Planned Parenthood also is making independent expenditures for the first time in Democratic primaries, spending about $14,000 sending mailers in support of two state senators, Terry Gerratana of New Britain and Marilyn Moore of Bridgeport.

“They have both been leaders on our work and are exactly the kinds of lawmakers we would like to see maintain their seats in the General Assembly,” said Susan Yolen of Planned Parenthood. “Really, it’s that simple.”

As CT Mirror reported Wednesday, the Connecticut Business and Industry Association is planning on spending about $400,000 in the general election on four Senate and 11 House races.

The charter school movement, which was launched decades ago as a laboratory for experimentation in the public schools, has become a deeply polarizing force in Democratic politics at the local, state and national level.

U.S. Rep. Jim Himes, D-4th District, who represents Bridgeport, the scene of a longstanding fight over charters, said, “First and foremost, the rhetoric needs to be toned down.”

Himes, who was in the audience when U.S. Education Secretary John B. King Jr. addressed the Connecticut delegates to the convention at a breakfast last week, said the charter advocates erred by promoting their successes as evidence of failures by teachers.

“Though the reform movement has some really good ideas, they need to start celebrating and supporting teachers,” Himes said. “They made a big mistake by, in some cases, targeting teachers. Number two, we need to recognize that charters are demonstrating some success in some places and we need to learn from that. And three, we then need to look at those successes and figure out how to permeate them into the public school system, because charters will never replace public schools.”

All charter schools in Connecticut operate as part of their local public school districts, with 22 run by private non-profits and one in New Haven run by the local district.

Malloy, the co-chair of the DNC’s Platform Committee, was a featured speaker at a Democrats for Education Reform event in Philadelphia, even though the group’s president, Shaver Jeffries, complained of revisions to the platform negotiated by delegates for Hillary Clinton and Bernie Sanders.

“In essence, one of the largest school systems in the state are charter schools, over 9,000 students educated that way in our state,” Malloy said. “I think they’ve done a good job. You can slice and dice data, you can look at different things. But let’s take what’s best about all systems and use it to raise achievement, particularly in our urban environments.” 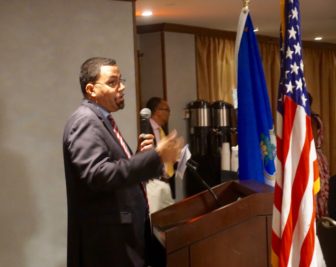 Mark Waxenberg, the executive director of the Connecticut Education Association, the state’s largest teachers’ union, said teachers believe that charters no longer are laboratories for innovations that can be introduced to the rest of the public school system.

“That goal, that mission, that dream is gone,” he said. “Now, it is about setting up a separate public system designed to educate the best and the brightest.”

Unionized teachers complain that charters are quicker to rid themselves of students with learning disabilities and behavioral problems and other challenges. They obtained language in the Democratic platform that calls for charters to reflect their communities, as other public schools do:

“We believe that high-quality public charter schools should provide options for parents, but should not replace or destabilize traditional public schools. Charter schools must reflect their communities, and thus must accept and retain proportionate numbers of students of color, students with disabilities and English Language Learners in relation to their neighborhood public schools. We support increased transparency and accountability for all charter schools.”

Malloy’s cordial relationship with wealthy backers of charter schools, some of whom are donors to the Connecticut Democratic Party, has complicated his dealings with teachers’ unions throughout his six years as governor. His first education commissioner, Stefan Pryor, was a co-founder of a charter school in New Haven.

Jan Hochadel, the president of AFT-Connecticut, said funding at the state level for charters has to be seen as dollars unavailable for other other public schools.

“This is especially true in the context of an austerity state budget with deep cuts to public education and aid to local communities,” she said. “What Connecticut doesn’t need right now are legislators willing to siphon away public resources to satisfy special interests — especially when the futures of the vast majority of our students are at risk.”

President Obama, who has declared a “National Charter Schools Week” each year he has been in office, proposed increasing federal funding for charter schools this year by 5 percent to $350 million.

In his proclamation, Obama made clear he still sees charters as valuable laboratories: “With the flexibility to develop new methods for educating our youth, and to develop remedies that could help underperforming schools, these innovative and autonomous public schools often offer lessons that can be applied in other institutions of learning across our country, including in traditional public schools.”

King, his education secretary, is a co-founder of Roxbury Prep, a charter school in Boston, and is the former managing director of Uncommon Schools, a non-profit charter management organization. In an interview after his meeting with the Connecticut delegates, King downplayed the conflicts between charter schools and teachers unions.

“This is about what are our aspirations for the country, and I think what parents want is a good school for their kids,” King said. “And what all of us want is an education system that prepares students for success, not only in college but for careers and in life. I think some of the debate we are having are about form over substance. The real question is are schools good?”

The conversation about education must move past the “charter-district divide,” he said. “If we can focus the conversation on what’s best for kids and what kinds of school experiences will be transformative for kids, whatever the governance is, I think that’s our best path forward as a country.”