DeLauro visits Afghanistan after a stay in Italy

Washington – Pivoting from a taxpayer-funded trip to Italy this week with House Minority Leader Nancy Pelosi, U.S. Rep. Rosa DeLauro visited Afghanistan this week to talk to soldiers and the nation’s officials.

In all, eight House Democrats were on the congressional delegation trip, or CODEL, which came on the heels of President Obama’s announcement of a modified U.S. troop withdrawal from Afghanistan, one the longest overseas U.S. military missions ever.

DeLauro, D-3rd District, who visited Afghanistan once before, in 2009, said her purpose in taking the trip was to speak to U.S. troops about their mission.

In her talks with the troops, she said she visited with three soldiers from Connecticut – from Bristol, Wallingford and Groton – at a U.S. military base near Jalalabad.

“The terrain is very difficult,” DeLauro said. “It’s an extraordinary sacrifice for the troops.”

“There are still issues that abound, including (opium) poppy production and the drug effort,” DeLauro said.

Pelosi had raised eyebrows with her announcement that she was taking a group of Democrats on a taxpayer-funded trip to Italy, one of several she’s taken to the Mediterranean country. DeLauro has usually accompanied Pelosi on these visits.

The trip to Afghanistan, taken during Congress’s six-week summer recess, was not announced ahead of time for security reasons. 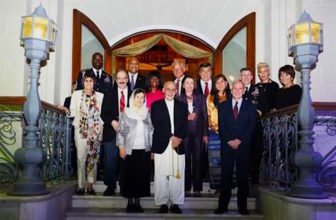 While DeLauro was away, she may have won a key victory in her fight against the Trans-Pacific Partnership, a trade pact between the United States and 11 other Pacific Rim nation.

DeLauro is fighting Obama administration’s attempts to hold a vote on the TPP in a lame duck session of Congress after November’s election.

But House Speaker Paul Ryan this week said the deal won’t get a vote in Congress this year because there isn’t enough support.

Ryan said there is no point in bringing up the deal in the lame-duck session unless the Obama administration can build enough support for the controversial agreement by year’s end.

“As long as we don’t have the votes, I see no point in bringing up an agreement only to defeat it,” Ryan said.  I have my own problems with TPP; it is not ready, the president has to renegotiate some critical components of it.”

Organized labor and liberal Democrats oppose the TPP because they say it would move jobs overseas and weaken U.S. environmental and safety regulations. Hillary Clinton, who helped negotiated the trade pact as Secretary of State, has now rejected it.

DeLauro said she is still wary, despite Ryan’s voiced reluctance to bring the trade pact up for a vote. She said she hopes the issue is dead for the year, but she’s concerned the Obama administration will continue to push for a vote.

“The coalition (against TPP) will be ready for any circumstance,” she said.