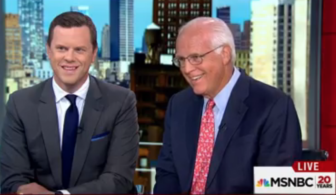 Washington – Former GOP Rep. Chris Shays was one of 50 prominent Republicans on Wednesday to launch “Together for America,” a group that supports Democratic candidate Hillary Clinton’s bid for the presidency.

“These endorsements send a strong signal to Republican and independent voters that respected leaders are putting country over political party in this election,” Together for America said.

Shays told the Connecticut Mirror he decided to support Hillary Clinton, instead of this party’s nominee Donald Trump, for president after watching the national parties’ conventions this summer.

“First off, I made it clear long ago that I was not going to support Donald Trump,” Shays said. “Then the issue was, ‘What am I going to do?”

Shays, who kept the Fairfield County-based 4th congressional district in GOP hands for 22 years before his ouster by Democratic Rep. Jim Himes, said he decided to monitor the gatherings of the Republican and Democratic conventions.

He said the GOP convention’s attack on Clinton, which included a mock trial  focused on her foreign policy by New Jersey Gov. Chris Christie, “almost felt like a lynching mob.”

“There was nothing there that made me feel good about being a Republican,” he said.

After monitoring the Republican National Convention in Cleveland last month, Shays turned his attention to the national gathering of Democrats in Philadelphia.

Shays said it was “focused on light” and inclusivity. He was also impressed by Clinton’s choice of Virginia Sen. Tim Kaine as a running mate.

“This is an indication that she is reaching out to the center,” he said.

Shays, who initially supported Ohio Gov. John Kasich, a Republican, said he reflected on his relationship with Clinton, a former secretary of state, when she was a senator from New York and they were both in Congress.

“I had to say to myself, ‘She is a real good senator,” Shays said. “She knows leaders all around the world, she knows Congress and she knows the American people. She’s going to make a good president.”

In a high-profile announcement that included a CNN op-ed and an appearance on MSNBC’s “Morning Joe” on Wednesday, Shays was among the latest Republicans to say they are voting for Clinton.

“He says and does things my mother and dad told me never to say do. He doesn’t understand the basic requirements to being president of the United States, and frankly he’s dangerous,” Shays said of Trump.

Former Connecticut Sen. Joe Lieberman, a Democrat turned independent who was once considered a possible vice presidential pick for GOP Sen. John McCain, once said he considered voting for Trump.

But he abandoned that idea publicly on Wednesday.

“I’m an independent Democrat. I never changed parties, and I’m going to vote for Hillary Clinton because I’ve known her forever,” Lieberman said on Fox News. “She’s strong, she’s smart, she understands national security, and what I was most impressed with during our years in the Senate together is that she reached across party lines to build coalitions and get stuff done.”

“The question in November is not whether Republicans will lose but how badly will they lose.” Weicker said. “Right now it looks like everything: House, Senate, presidency.”

Another former Connecticut member of Congress, Republican Rep. Rob Simmons, said he’s keeping his preference for the presidency under wraps.

“I have no endorsement, and I have made no decision,” said Simmons, who is now Stonington’s first selectman.

Simmons said he prefers to focus on local issues and his job rather than “national-level roughhousing” politics.

But he indicated Trump posed a problem to the GOP.

“Trump is a phenomenon that reflects the anger of the middle class on this administration – and previous administrations,” Simmons said. “The Republican Party has nobody to blame but themselves for this phenomenon.”

Simmons also said he did not attend the GOP national convention out of concerns “it would be divisive.”

Meanwhile, Shays said other Republicans who can’t bring themselves to embrace Trump should “do what they feel in their hearts and live with it.”

“I have a lot of friends in the (Connecticut) statehouse, and this is a horrible position to be in,” he said. “You have to do what you have to do. They say ‘half of my constituents support Trump and half don’t,’” Shays said.

He said he”had a taste” of the struggles some Republicans are having with Trump when he was an early endorser of former Republican vice presidential candidate Sarah Palin.

“I eagerly supported her at the beginning,” he said. “But then after that it went downhill, and I was stuck with her when she made a stupid mistake.”

Shays said members of Congress, and those trying to unseat an incumbent in Congress, have the responsibility to tell voters who they support for president.

“They are not going to be able to get around it,” he said.

But his advice for those Republicans running for the state legislature is to keep to local issues and attack Democratic Gov. Dannel P. Malloy’s record.

“They should say, ‘I am focused on the state, and I’m not going to engage in Dan Malloy’s attempt to make this about Donald Trump, given the trouble the state is in,’” Shays said.