Washington – Aetna CEO Mark Bertolini told the Justice Department the insurer would have to pull back from the Affordable Care Act’s state insurance exchanges if a proposed merger deal with Humana was not approved, provoking strong reaction on Capitol Hill.

In a letter to an attorney in the Justice Department’s Antitrust Division, Bertolini wrote, “Unfortunately, a challenge by the DOJ to that acquisition and/or the DOJ successfully blocking the transaction would have a negative financial impact on Aetna and would impair Aetna’s ability to continue its support, leaving Aetna with no choice but to take actions to steward its financial health.”

Bertolini said one way the company could do that was to pull back from the exchanges, a move Aetna announced on Tuesday. The company said it would leave 11 of the 15 exchanges it participated in in 2016 and scrap plans to expand to other state exchanges.

Even before Bertolini’s letter was disclosed, several lawmakers in Congress drew links between Aetna’s announcement on Tuesday that it was backing away from the insurance exchanges and the Justice Department’s move to block its merger with Humana.

In a statement released Tuesday, Rep. Frank Pallone, D-N.J., the top Democrat on the Energy and Commerce Committee, said he is “troubled by reports this announcement could be in retaliation” to the Justice Department’s decision.

Bertolini wrote his letter on July 5, about two weeks before the Justice Department decided to file suit to block both the Aetna-Humana deal and a proposed merger between Anthem and Cigna, Bertolini’s letter said the company would limit participation to no more than 10 states in 2017, rather than the 20 it had been planning.

“Finally, based on our analysis to date, we believe it is very likely that we would need to leave the public exchange business entirely and plan for additional business inefficiencies should our deal ultimately be blocked,” Bertolini wrote. “By contrast, if the deal proceeds without the diverted time and energy associated with litigation, we would explore how to devote a portion of the additional synergies (which are larger than we had planned for when announcing the deal) to supporting even more public exchange coverage over the next few years.”

The letter was disclosed by the Huffington Post, which obtained the document through a Freedom of Information Act request.

Aetna spokesman T.J. Crawford said Bertolini wrote the letter in response to a Justice Department request for the company’s views “on the potential impacts to our individual public exchange business should the Humana transaction be blocked.”

“We indicated that there would indeed be an impact, which should not come as a surprise given a loss of deal synergies coupled with a potential break-up fee would raise further questions about sustaining a position in a business where we have yet to break even,” Crawford said.

Under its deal with Humana, Aetna would have to pay a $1 billion breakup fee if the merger were not completed by the end of the year.

Crawford said, “This loss of capital reserves would have an impact on other business segments as well.”

He also said Aetna shared its views on the impact a merger denial would have on its exchange participation with the Department of Health and Human Services, “which has oversight of the public exchanges and therefore should be informed of potentially significant actions related to our exchange presence.”

Meanwhile Anthem has said that if its proposed deal with Cigna is allowed to go through, it will increase its exchange offerings to nine additional states. 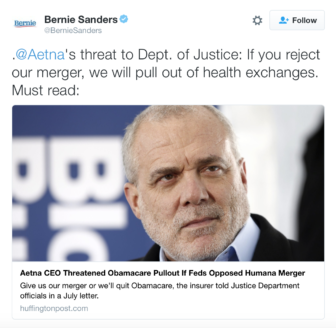 Sen. Bernie Sanders, I-Vt., tweeted “@Aetna‘s threat to Dept. of Justice: If you reject our merger, we will pull out of health exchanges.”

Sen. Elizabeth Warren, D-Mass., said, “The health of the American people should not be used as bargaining chips to force the government to bend to one giant company’s will.”

Bertolini has cited unsustainable losses of $430 million on the exchanges since 2014. But in April, Bertolini was more bullish about Aetna’s business on the exchanges, telling investors that 1.2 million new customers had flocked to Aetna under the health law’s new online markets. He said again in May the company planned to stay in the exchanges.

But Aetna said a sicker, older risk pool in the exchanges has affected its ability to make profits from those customers. And Aetna is not the only insurer rethinking its participation.

Earlier this month, Humana said it would cut its presence on the exchanges from 15 states to 11. In July UnitedHealthcare said it plans to remain in “three or fewer exchange markets.” One of the exchanges the company is abandoning is Connecticut’s Access Health CT.