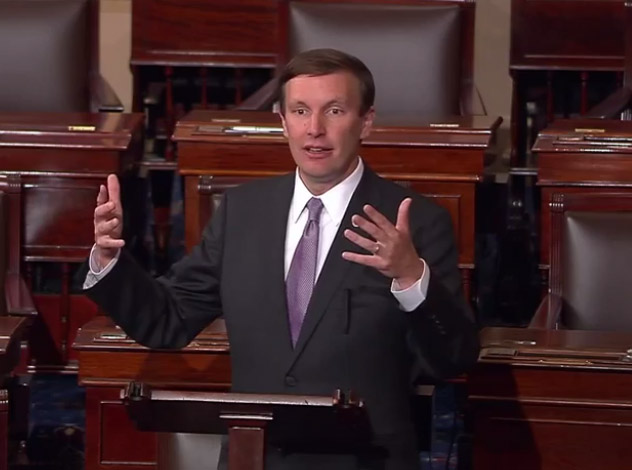 Murphy delivering a speech on the Senate floor.

Washington – Since Donald Trump has declined to release his tax returns, Sen. Chris Murphy is backing a way to make them public – a bill that would force the issue.

Partnering with fellow Democratic Sen. Ron Wyden, D-Ore., Murphy on Thursday pressed for votes for a bill that would require all presidential candidates from major parties to make public their tax returns within two weeks of their parties’ national conventions. The effort is part of a renewed Democratic campaign over Trump’s tax filings.

In keeping his tax returns under wraps, Murphy said Trump is violating a “40-year-standard of campaign transparency and may even be running for president to change tax laws that benefit his companies.

“This is an extraordinary moment in which the candidate may be seeking the presidency to protect his investments,” Murphy said.

The Trump campaign did not immediately respond to a request for comment.

In declining to release his returns, Trump has said he cannot provide them because he is being audited by the IRS.

“There’s nothing to learn from them,” he told the Associated Press in May.

“What is Trump hiding?” the ad asks.

Murphy said there is “enormous peril to the public” if Trump fails to make his returns public before Election Day in November.

The Presidential Tax Transparency Act, introduced by Wyden in May, would force the Treasury Department to post presidential candidates’ returns on the Federal Elections Commission web site if that candidate did not disclose the information within two weeks of their nominating convention.

“This information should be available to voters  before they vote,” Wyden said.