Malloy chats with LePage: ‘He didn’t challenge me to a duel’ 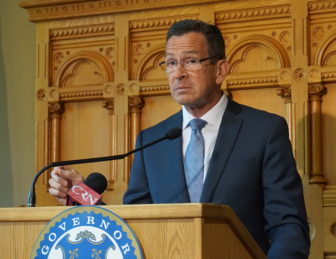 In response to a reporter’s question about how LePage interacted with his colleagues, Malloy first made light of controversial comments in recent days that have led to calls for LePage’s resignation, including his wish to be living in an era when he could conduct a duel to the death with a state legislator critical of his racial claims.

“He didn’t challenge me to a duel,” Malloy said, prompting laughter.

“Gov. LePage was a thoughtful and active participant in all the conversations we’ve had here,” said Massachusetts Gov. Charlie Baker, the Republican host of the conference in Boston. He dryly added, “He didn’t challenge me to a duel, either.”

Several governors and premiers were available to reporters by conference call and in person at the conclusion of a day of meetings dominated by regional energy issues and the growing opioid crisis. LePage was absent during the concluding news conference. 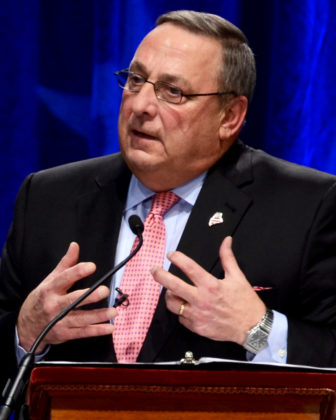 Malloy, a Democrat, gave a serious response when a reporter pressed about LePage reiterating Monday that 90 percent of those arrested for trafficking were black and Hispanic dealers from other states, this time adding Lawrence and Lowell, Mass., to Waterbury, Brooklyn and the Bronx as their home bases.

“I think it was a tremendous mistake last week to try to make the opioid issue a racial one,” Malloy said.

He said his staff researched the issue and found that as of Friday there were 421 persons incarcerated in Maine on drug trafficking offenses: 301 whites, 90 blacks, 12 of two or more races, eight Native Americans, four Asians and seven with no race listed.

“This is not a racial issue. More white people are dying of abuse. More white middle-aged people are getting hooked on the drug having to do with knee replacements, hip replacements and dental surgery. And I think it is a great disservice to look at this as a racial issue. It is not,” Malloy said. “It should not be confused as one, and we need to be careful about mixing race into this particular issue.”

LePage, a two-term GOP governor, has yet to explain why he views the the race of those arrested as relevant to combating  the flow of heroin through New England. In comments to a State House News reporter at the conference, LePage did not back away from claims that heroin in Maine was an issue brought there by minorities, saying incarcerated white drug traffickers are involved in the homegrown meth trade.

“Nobody wants to listen,” LePage told the News Service. “What I said was this: Meth lab arrests are white. They’re Mainers. The heroin-fentanyl arrests are not white people. They’re Hispanic and they’re black and they’re from Lowell and Lawrence, Mass., Waterbury, Conn., the Bronx and Brooklyn. I didn’t make up the rules. That’s how it turns out. But that’s a fact. It’s a fact. What, do you want me to lie?”

At a governors-only meeting, officials said, the discussion focused on the need for greater regional cooperation on interdiction, including a request for help from the U.S. Department of Justice.

New Hampshire Gov. Maggie Hassan, a Democrat whose response to the drug crisis is the subject of dueling super PAC ads in her campaign for U.S. Senate, said state authorities already are working with the DEA and other federal agencies.

“We think we could improve that collaboration and really have it even a more comprehensive approach,” she said. “But at the end of the day we will stem and reverse the tide of this epidemic. We will beat it as we all continue to do it together, to be unified in addressing every single aspect of this issue, understanding how entirely devastating it is to our people, our families, our businesses. This is one of those moments when it doesn’t matter which side of the border you’re on. It doesn’t matter which state you’re in. It doesn’t matter what job or walk of life you’re from. This impacts everyone.”

In a telephone interview, Malloy said his interactions with LePage involved the broader issue of the drug crisis, not LePage’s comments about minorities in Massachusetts, Connecticut and New York. Malloy had criticized LePage last week when asked to comment in Connecticut.

“I think everyone was on their best behavior, at least in their governors’ meetings,” Malloy said.

Malloy said he and LePage said nothing about race during their face-to-face meeting.

“It was clear he was aware of my prior comments,” he said. “This was a collegial meeting.”