Malloy raises money, and profile, as head of DGA 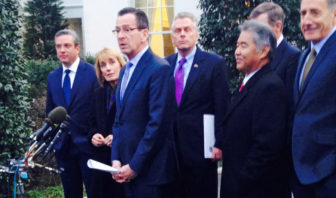 Connecticut Gov. Dannel Malloy and other Democratic governors speaking outside the White House following a meeting with President Obama.

Washington — As chairman of the Democratic Governors Association, Gov. Dannel P. Malloy has yet to campaign for a single Democratic candidate for governor. In a tough political season, Connecticut’s socially liberal governor has focused instead on raising funds for his fellow Democrats — some of whom are running to his right.

Overshadowed by the race for the White House and control of the U.S. Senate, the DGA under Malloy is raising more money to influence a dozen state gubernatorial races than it did four years ago. As many as nine of those contests are competitive, and Democrats are mostly playing defense.

In some of those hot races – in Missouri, Indiana, North Carolina, West Virginia, and Montana – Democratic candidates have shifted to the right, touting their fiscal conservatism, support for welfare reform and even their “A” ratings from the National Rifle Association.

So Malloy, a progressive governor strongly identified with gun control, should steer away from campaigning for these candidates, said Geoffrey Skelley, a political analyst for the University of Virginia’s Center for Politics.

“Malloy is certainly to the left of these guys,” he said. “His best role is to try to raise money.”

In a speech to the Democratic National Convention in Philadelphia last month, Malloy did not downplay liberal issues. He touted accomplishments in Connecticut, including raising the minimum wage and implementing tough gun laws following the shooting deaths of 26 students and staff at Sandy Hook. In a response to the Connecticut Mirror, he also listed liberal policy goals for his party.

“While Republican governors around the country are trying to undermine voting rights, attack the right to collectively bargain, and pass hateful bills to target the LGBTQ community, Democrats are fighting to restore voting rights, help workers by raising the minimum wage, and ensure equality for LGBTQ people,” he said.

But Jennifer Duffy, senior editor of the nonpartisan Cook Political Report, said liberal philosophies won’t play well in many Democratic races this year. Jim Justice,  a Democrat running for governor in West Virginia, has even said he won’t vote for Hillary Clinton. Duffy, like Skelley, said Malloy should concentrate on raising money and  steer largely clear of the campaign trail.

“The job as chairman is much less strategic and much more raising money,” she said.

Duffy also said that by the time Malloy was chosen to lead the DGA , most of the Democrats running as challengers or for empty seats had been recruited.

“He’s playing with the deck he was dealt, as opposed to the one he created,” she said.

However, DGA spokesman Jared Leopold  said Malloy’s campaigning experience – he ran for governor unsuccessfully in 2006, won his seat in 2010 and was re-elected in 2014 – is something he can use to help other Democratic candidates.

“Having someone with that level of experience is a huge asset for Democratic candidates,” Leopold said “He’s a seasoned political campaigner.”

Malloy won his races in disastrous years for the Democratic Party.

“Governor Malloy is well prepared to lead our party in governor’s races this cycle,” Markell said. “He has been through and won tough elections and has demonstrated that it’s possible to overcome challenging political environments while also ensuring you are well positioned to govern after the campaign is over. His support will be incredibly valuable to Democratic candidates across the map this year.”

Malloy has so far stayed off he campaign trail. But he has been adept at raising money for the DGA. The organization has pulled in more money than it did in the 2012 cycle, the last time there were 12 gubernatorial races.

However, the DGA continues to trail the Republican Governors Association in fundraising. It reported raising nearly $73 million as of June 30.

According to an analysis by the Connecticut Mirror, top donors to the DGA include Anthem and other insurers, Astrazeneca and other pharmaceutical companies, Walmart and labor unions.

Anthem, Astrazeneca and Walmart were also among the top contributors to the RGA, which was also helped by the Koch brothers and other politically active conservative billionaires, including casino magnate Sheldon Adelson and hedge-fund manager Paul Singer.

Fundraising by the DGA head, who is required to travel to events and reach out to potential donors on the phone, is time consuming.

Malloy said his job at the DGA has helped Connecticut.

“My role as DGA chairman has been a positive for the state of Connecticut,” he said. “Our voice has been heard in the national conversation, and I have built strong relationships with fellow governors throughout the nation, improving lines of communication to share best practices for moving our states forward.”

Malloy also has been involved in identifying Democratic candidates for the 2018 races.

There’s also the question of redistricting after the 2020 census. The GOP has been adept at redrawing congressional districts after past censuses to give Republicans an advantage in races for the U.S. House of Representatives and many state assemblies.

Malloy said, “We are working hand-in-hand with congressional leaders to un-rig the map and ensure fairer representation for voters.”

Malloy’s term is up at the end of the year, but he can run for another one-year stint.

Duffy of the Cook Political Report said that when Malloy was selected for the DGA job, there was a small pool of candidates to choose from because there were only 18 Democratic governors and some were running for re-election this year.

“It’s not a job a lot of people were banging down the door to get,” she said.

The job can raise an ambitious politician’s profile. Bill Clinton, Michael Dukakis, Howard Dean and Martin O’Malley are all former DGA chairmen. But mostly the “thankless job” helps a Democratic governor win favor from his or her party, Duffy said.

Although he had little to do with the selection of the Democrats running for governor this year, Malloy  is vulnerable to criticism if his party loses more governorships.

While there’s a chance Democrats will win gubernatorial races in North Carolina and perhaps Indiana, there could be losses elsewhere, said UVA’s Skelley.

If the party can keep its  losses to one seat – or no seats “that would be a pretty good accomplishment” for Malloy, Skelley said.