Lockheed puts big number on cost of business in Connecticut 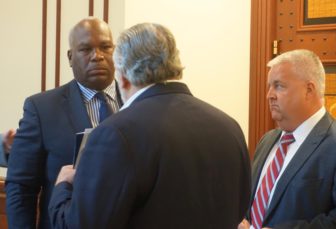 Legislators say a senior Lockheed Martin official told them in private meetings Monday that $200 million in incentives the company wants  for its Sikorsky Aircraft subsidiary are needed to help offset the $400 million more it would cost to produce CH-53K helicopters in Connecticut in coming years rather than in competing states.

Based on interviews with legislative leaders, the incentive package is expected to overwhelmingly pass Wednesday in special session with bipartisan support, despite partisan bickering over the degree to which the deal represents a victory for the Connecticut economy or evidence of the high cost of doing business in the state.

Connecticut is promising annual grants and tax breaks of about $14 million if the aerospace giant meets goals for hiring, capital investments and purchases from its chain of more than 300 suppliers over 14 years for a total of $200 million in incentives. By exceeding hiring goals, the company could earned another $1.9 million annually, up to a maximum of $20 million.

Legislators said the return on that investment is billions to the Connecticut economy in wages and other spending over the life of a deal that runs to 2032, including a promise to nearly double purchases from in-state suppliers to $675 million annually. Sikorsky is expecting an initial order of nearly 200 CH-53K helicopters from the Navy for use by the Marines, with production to begin in 2019 and delivery of the first aircraft in 2020.

Lawrence Duncan III, the Lockheed vice president for government relations, confirmed quoting to legislators a $400 million cost-differential for producing those helicopters at Sikorsky’s massive plant by the Housatonic River in Stratford, headquarters to a company founded 85 years ago by the inventor of the modern helicopter, Igor Sikorsky.

“It’s accurate,” Duncan said in an interview at the State Capitol after meeting with every caucus except Senate Republicans, who reviewed the deal last week in a teleconference. “It’s a $400 million hole we’re trying to fill. Everybody’s got to pitch in.”

He declined to provide an analysis of the factors behind that cost differential, nor would he say how close the state aid, plus unspecified concessions expected by the Sikorsky’s unionized workforce, would come to $400 million. Teamsters Local Union 1150 is expected to vote on concessions on Oct. 9.

With other states bidding to be selected for the CH-53K production, some of the $400 million differential probably was attributable to promised aid by other states. Connecticut had an offsetting advantage: the existing capital investment Sikorsky has already made in its plant, plus a workforce and supply chain adept at advanced manufacturing.

“I would be reluctant to try to put a monetary figure on the intangible benefits of the incredibly skilled workforce that we have here in Connecticut and the track record of success that they’ve had. Clearly that’s an advantage and it’s helpful,” Duncan said. “But that skill and talent standing alone certainly isn’t enough to carry the day. If it was, we wouldn’t be here now.”

Duncan and Catherine Smith, the commissioner of economic and community development, jointly presented the deal to the caucuses.

Leaders of the House and Senate Democratic majorities said they know of no Democratic legislator who plans to vote against the deal. House Minority Leader Themis Klarides, R-Derby, said she expects a majority of Republicans to join them.

One of the dissenters is Rep. Robert C. Sampson, R-Wolcott, who planned to vote against the incentives as a protest against what he called the extortionate nature of economic incentives. He acknowledged that a no vote was easier knowing that the package would pass and Sikorsky’s jobs would be saved.

Democrats and Republicans differed sharply on what lessons can be drawn from the willingness of Lockheed Martin, which purchased Sikorsky from United Technologies Corp. last year, to commit to keeping Sikorsky’s headquarters and the production of an aircraft expected to be the mainstay of its business in Connecticut.

“Nobody likes the fact that we have been pushed into this corner where we now have to make deals with different businesses to keep them here,” Klarides said. “If the state of Connecticut had good fiscal policy, had good business policy and wasn’t trying to kick businesses out we wouldn’t have to turn around and try to keep them in here.”

Klarides and Senate Minority Leader Len Fasano, R-North Haven, had urged Democrats to expand the call of the special session to consider other business initiatives, a proposal Democrats viewed as a bid to gain a platform for highlighting Connecticut’s economic challenges.

Democrats said Electric Boat, Pratt & Whitney Aircraft and, now, Sikorsky have all committed to expansion in Connecticut. Pratt plans to hire 8,000 workers to cope with retirements and respond to a huge backlog of orders from airlines for its new generation of efficient jet engines. EB has committed to keep submarine production in Groton.

“These are the jobs for today and the jobs for tomorrow,” said Senate Majority Leader Bob Duff, D-Norwalk. “I think Connecticut is well-positioned to grow jobs well into the future and to continue to make us a leader for high-skill, high-wage jobs.”

Other Democrats on the political left and right said they were less than enthusiastic about the need for incentives and the ability of corporations to demand them.

Sen. Gary Winfield of New Haven, who was a Bernie Sanders delegate to the Democratic National Convention, said he would vote for it, as did Sen. Paul Doyle of Wethersfield, a conservative, who said, “It’s the way of the world.”