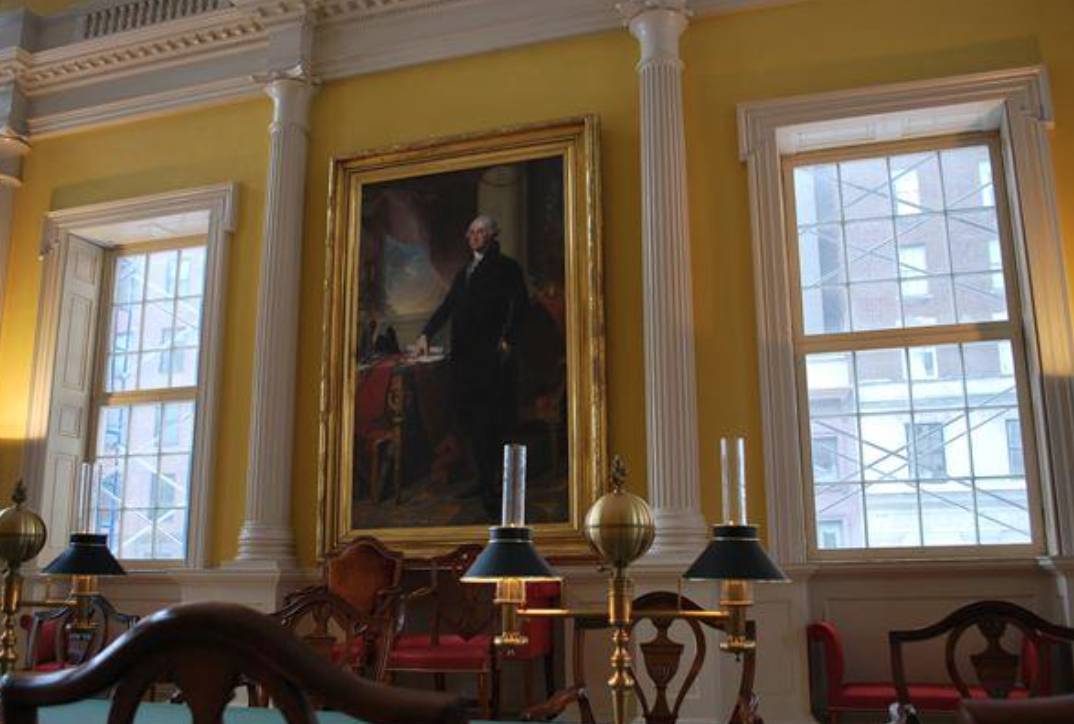 The Gilbert Stuart painting of George Washington in the Old State House.

The Old State House will reopen to the public on a limited basis, possibly as soon as Nov. 1, based on an agreement announced Friday by Gov. Dannel P. Malloy and state legislative leaders.

The agreement returns control of the downtown Hartford landmark to the Office of Legislative Management, ending a plan to shift oversight to the Department of Energy and Environmental Protection. It also ensures that paintings, antiques and other memorabilia slated for removal from the Old State House will remain in the building, which was completed in 1796.

Some details of the transition still are being finalized. But the executive director of the Office of Legislative Management, Jim Tracy, said he hopes the building will be open to school groups and other visitors in four weeks. Some details, including hours of public access, still are being developed.

It also was unclear whether the legislature would need additional funds in its budget in order to maintain control over the historic building.

“The Old State House is symbolic of the rich history of our state and offers a wealth of historic insight and informative exhibits, which attract visitors and school groups from throughout the region,” Malloy said. “It’s an historic jewel, a tourist attraction, and a focal point for education that needs to remain a vital part of a vibrant downtown Hartford. I am grateful that we (were) able to work together in a positive manner and reached an outcome that will allow the operations of this building to continue so that it can be enjoyed for many more years.”

“There are budget challenges all throughout state government, and care-taking and operating the Old State House is no exception,” Speaker of the House J,. Brendan Sharkey, D-Hamden, said. “Under these circumstances, I am pleased the legislature stepped up and helped figure out a way to ensure this historical asset and popular attraction can continue to be enjoyed by the public.”

The Old State House appeared to be a victim of the state’s ongoing budget woes.

When Malloy and legislators closed a nearly $1 billion hole in 2016-17 finances chiefly with spending cuts last May, part of that solution involved transferring oversight to DEEP and reducing the appropriation for Old State House management from $500,000 to $400,000.

DEEP Commissioner Robert Klee, estimated it would take between $800,000 and $900,000 per year for his department to properly administer the Old State House, preserve all of the antiquities within, and accommodate tourism as well. 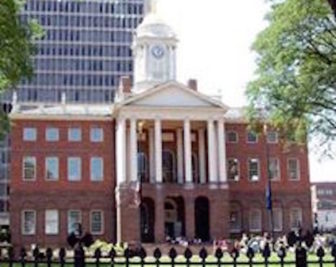 His department closed the Old State House to the public in July and announced plans to  remove paintings, antiques and other historic onjects that the building had housed for years. Though DEEP could maintain security on the building, Klee said his budget would not allow for the precise climate control measures needed to safeguard fine art — and paintings in particular — worth tens of millions of dollars.

Tracy said a few paintings that were scheduled to be returned to the Wadsworth Atheneum will leave the Old State House, but most paintings and other antiquities, including a Gilbert Stuart portrait of George Washington in the Senate gallery, will remain.

The Old State House had been drawing about 53,000 visitors per year, and as public criticism of the planned changes intensified, Malloy and leaders of the Democrat-controlled General Assembly suspended the oversight transition to DEEP.

“Having one of the state’s most prized historical jewels potentially shuttered for an unknown period of time was not acceptable,” House Minority Leader Themis Klarides, R-Derby, said. “I am thankful that an accommodation was able to be reached to avoid that possibility. This was a very positive outcome.”

“The Old State House has undergone a lot of changes and faced a lot of challenges in its two centuries in downtown Hartford, but with this new agreement I think we have arrived at a sensible solution to keep this piece of Connecticut history open and secure and welcoming,” said Sen. Beth Bye, D-West Hartford, co-chair of the Appropriations Committee.

“This is a well thought-out resolution that will keep the Old State House open and all its historic treasures protected,” said Sen. Rob Kane of Watertown, ranking GOP senator on appropriations.