Esty and Cope disagree, if amiably, on gun control and climate change 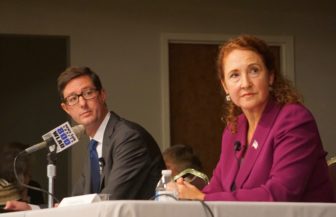 In a district scarred by the worst elementary school shooting in U.S. history, the massacre of 26 children and educators at Sandy Hook, Esty has established an identity in two terms as a proponent of eliminating a major gap in firearms background checks — the sale of firearms at gun shows and over the internet.

Cope, the first selectman of small-town Sherman and an open skeptic of the need for further gun controls on the state or federal levels, said Esty was working to export Connecticut’s strong background check law, one broadened after Sandy Hook with bipartisan support, to 18 states with largely unregulated gun sales.

“I would rather see her focus her issues and her time on things that directly impact the 5th District,” Cope said. “I think what’s important is to hold the FBI accountable for what they have done in failing, I think, to keep track of these terrorists, regardless of whether or not they use guns.”

“This issue is near and dear to the heart of this community and this region, and Mr. Cope is, I’m afraid, woefully ill informed,” Esty said. “Since Sandy Hook, over 100,000 Americans have died from guns — 100,000. And in that time the U.S. House of Representatives has not taken a single action, not a single debate on a single bill, or a single vote. And yes, Connecticut does have strong gun laws and they have helped to save lives.”

Web sales now account for between 20 and 40 percent of all firearms purchases, she said.

When the debate was opened to audience questions, gun control again came up. Cope said he feared that requiring background checks on sales made at gun shows or the web would impose on the “due process” rights of gun buyers.

“I think that what we’re really talking about here is due process, and I think we need to be sure that a citizen’s rights are not being infringed on by these types of laws. That’s key. The Second Amendment has proven to be slightly alterable by certain members of Congress,” Cope said. “I do think that the loophole would have to be examined to be sure that one’s due process rights are not violated.”

“With all due respect, I don’t think you understand the question,” Esty said. At issue, she said, is applying the same standard now met by customers in gun shops to transactions carried out elsewhere.

“What I hear people say is don’t take away my rights,” he said.

Judged by how Republican candidates for statewide office have fared here, the 5th District is generally seen as the most competitive of the five congressional districts in Connecticut, where no Republican has won a congressional race since 2006. With little money or name-identification, Cope’s best hope is to hope there is a strong Trump vote he can ride to an upset.

On June 30, the end of the last reporting period, Cope raised $61,621 compared to  $1.5 million for Esty. A campaign spokesman said the finance report due Saturday will not show a significant influx of cash, meaning Cope will end his campaign without advertising on television. Esty says she is prepared to go on television.

Over an hour, the two candidates amiably fielded questions from a panel of journalists and then from audience members, disagreeing on how strongly a role the federal government should play managing health care, protecting the environment and stimulating the economy.

The Portuguese Cultural Center, where about 200 people attended the debate sponsored by the League of Women Voters, was a Trump-free zone for the evening as neither candidate mentioned the GOP nominee or his fury at the Republicans who have   distanced themselves in recent days over his comments about women.

“If I thought it appropriate, I would have,” Esty said after the debate. “Frankly we’ve talked way more than enough about Donald Trump right now. I would still like to know if Mr. Cope is standing along side Donald Trump with his truly vile and awful behavior.”

“I fully expected somebody to ask about it,” Cope said later. “I feel like I am compelled, obligated really, to support Donald Trump in spite of his horrible comments — he did apologize — because he was the endorsed candidate. He won the primary.”

Sitting side by side, the candidates eschewed personal attacks. Esty praised Cope for running, and Cope thanked Esty for her “graciousness.” They were united in their opposition to the Trans-Pacific Partnership trade agreement.

If Trump was off limits, Cope twice invoked the name of Hillary Clinton, linking her tax and spending plans to Esty, a superdelegate who voted for Clinton over Bernie Sanders at the Democratic National Convention. Clinton has proposed substantially raising taxes on the wealthy. “She’s been campaigning for her, despite the fact Bernie won our district,” Cope said.

The Republican challenger, a native Texan who speaks with a soft twang, outlined an approach to government based on his stewardship of Sherman, a community of 3,694 that’s both a suburb of Danbury and Manhattan. As first selectman, Cope has refused to borrow money, reducing an inherited debt over his six years in office.

He suggested Congress do the same, an approach Esty suggested was naive. Esty said the U.S. badly needs to invest in infrastructure, echoing a talking point of the Clinton campaign.

Esty deemed the Affordable Care Act in need of an overhaul, but worth saving for providing health coverage to 20 million Americans and reducing expensive emergency-room visits by expanding preventative care. Cope called it an “epic failure” that needs to be replaced, though he suggested the answer might not be a federal program. 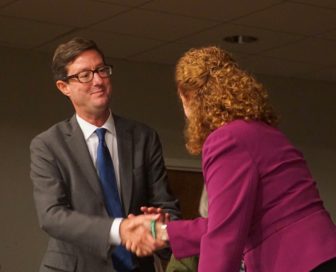 The candidates, who had never met, shake hands at the conclusion of their debate.

“What we should do is rely on private market solutions,” Cope said.

Esty, whose husband is the former commissioner of energy and environmental protection, said Congress needs to maintain or strengthen federal clean-air standards to combat pollution from coal-burning plants in the Midwest. The Republican platform calls for loosening regulations on burning coal.

“This is an area where there is a big difference between the parties,” Esty said.

She challenged Cope to say if he would break  with Republicans and support maintaining the clean air standards for power plants, a challenge he initially ignored as an issue no voter has raised with him during his 10 months of campaigning.

“I want to know actually what you would do,” Esty said, “I serve with people who don’t believe in climate change on the science committee. We actually have debates about that in committee, so I’d like to know on the clean power plants and climate.”

“I think the climate clearly has changed,” Cope said. “What cause, I can’t tell because I’m not a scientist.”