CT stepping up efforts to treat trauma in the very young 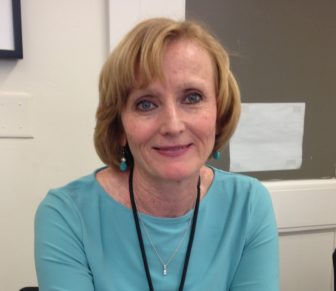 Aileen McKenna trains people who work with kids on how to identify signs of trauma in very young children – things like a baby crying inconsolably or a 2-year-old hoarding or stealing food.

Many times, she says, they react with surprise, as if to say, “so that’s what that was about.”

Instead, the signs of trauma often get wrongly identified as other issues, like sensory or developmental problems, said McKenna, the family liaison for the state’s Birth to Three program, part of the Connecticut Office of Early Childhood.

“You can really go off on the wrong path,” she said. “And I think it happens all the time.”

While Connecticut has made inroads in developing a system to address trauma in school-aged children, experts say there are still significant gaps in services for younger children who have been exposed to domestic violence, abuse, parental drug use, homelessness or other potentially traumatic experiences – things that can have lasting consequences for a person’s mental and physical health.

Now, there’s an effort underway to address that gap.

The Child Health and Development Institute of Connecticut, a Farmington-based nonprofit, is leading an initiative to train child care providers and others who work with young children to recognize signs of trauma – and to expand the availability of services to help. It’s funded by a $2 million grant from the federal Substance Abuse and Mental Health Services Administration.

Those involved hope it could help children get help earlier – or avoid going down the wrong path, as McKenna calls it.

“Many times what happens is that kids aren’t identified until they hit school or even beyond kindergarten or first grade, and often by that time, problems have worsened,” said Jason Lang, a psychologist with an expertise in trauma at the Child Health and Development Institute of Connecticut, who is leading the grant. “These are often situations where kids and families could get interventions earlier and prevent some of the more severe behaviors from happening down the line.”

Over the past decade, there’s been significant work to expand trauma-focused services for school-aged children in Connecticut. Mental health treatments that have been demonstrated as effective in addressing trauma are now available at clinics throughout the state and in some schools. Lang’s organization, which played a key role in that expansion, has also been training pediatricians, school nurses and others who work with children to recognize signs of trauma in youngsters. Child welfare workers have been trained in recognizing trauma, and children involved in the juvenile justice system are now routinely screened for exposure to trauma and connected to services if they screen positive.

Some who work in mental health welcome the chance to focus on younger children.

“The earlier you intervene, the better outcomes you’ll have,” she said.

The need is there.

Nearly 12,000 children under 5 were allegedly victims of abuse or neglect reported to Connecticut’s child welfare agency in 2014.

Young children face other hardships too. In a federal grant application filed last year, the state’s Office of Early Childhood reported that among children younger than kindergarten age:

So why has the system for addressing trauma in very young children lagged behind?

In part, it’s because of differences between very young and school-aged children.

“In many cases, [young children] can’t verbally represent what’s going on with them,” said Judith Meyers, president and CEO of the Child Health and Development Institute. That means that identifying trauma requires looking for other signs, like those McKenna trains people to spot.

Parents might not recognize behavior that’s not typical or hope a child’s problems are just a phase they’ll grow out of, Schiessl said.

“Kids are pretty resilient, but when you’re speaking of trauma or response to traumatic events, we want to intervene and prevent a full-blown diagnosis,” she said.

But the models used to address trauma in older children don’t necessarily work for younger kids.

In one of the most commonly used models, called trauma-focused cognitive behavioral therapy, children learn coping and problem-solving techniques. Then, working with a therapist, they write the story of their traumatic experiences and practice sharing it with a caregiver. The idea is to help them understand what they have been through, armed with coping skills to keep them from getting overwhelmed by it, said Michele Goyette-Ewing, director of the Yale Child Study Center Outpatient Psychiatric Clinic for Children. That makes sense for school-aged kids, she noted, but not for younger children.

By contrast, treatments for younger children more commonly involve play and include a bigger role for the child’s parents – in many cases, also addressing trauma the parent has experienced.

“You wouldn’t take a 3- or 4-year-old and provide therapy for that child individually,” Lang said. “In most cases, you would be working with the parents or the parent and the child together…That’s something that many clinicians aren’t trained in.”

There are treatments that already serve very young children, but they often have waiting lists.

Having more services available for children who have experienced trauma would make a big difference, Schiessl said.

“If you don’t have a model to address it, people don’t necessarily refer [children] to the treatment,” she said.

What the grant will do

The five-year grant will fund an Early Childhood Trauma Collaborative, led by the Child Health and Development Institute. It will also include the state Office of Early Childhood, the Department of Children and Families, nine mental health treatment providers, and The Consultation Center at Yale, which will evaluate the work.

The initiative includes training for people who work with young children on how to recognize signs of trauma and connect children who need help to services. Officials are still working on the details, but expect it will involve child care workers, and those who work with young children through the state’s Birth to Three program for children with developmental delays or disabilities, as well as other home visiting programs.

The plan is to train 500 people who work with young children – a small fraction of the workforce. But Lynn Skene Johnson, an official at the state Office of Early Childhood, said the hope is that the training will produce a framework that can be used to do more training in the future.

The grant also will be used to help outpatient clinics offer trauma treatments that have been shown to be effective in younger children.

That includes training clinicians. But it also means helping agencies monitor the quality of their services and working with each agency’s administrators to make broader changes that might be needed, such as asking all new clients about trauma, or adjusting productivity expectations for clinicians delivering trauma treatments that require them to spend time meeting with other clinicians, cutting into billable patient time.

That approach is particularly important, Schiessl and Goyette-Ewing said, because there’s often high turnover in mental health agencies, so making sure a model is sustainable requires more than just training a few clinicians.