In CT, most Republican mega-donors steer clear of Trump

Instead, some of Connecticut’s richest Republicans gave to other candidates running in the GOP primaries and even to the anti-Trump Our Principles PAC, a fund established by a top campaign aide of former Massachusetts Gov. Mitt Romney. These funds operate independently of a candidate’s campaign and are not subject to limits on donation amounts. 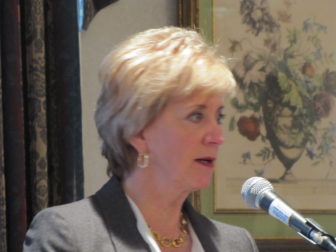 According to the Federal Elections Commission, Michael Vlock of Branford, director of Launch Capital, gave $1.5 million to the Conservative Solutions PAC that backed the failed candidacy of Sen. Marco Rubio, R-Fla.

Vlock also gave $2.7 million to the stop-Trump Our Principles PAC.

Another hedge fund giant, Cliff Asness of Greenwich, gave $1 million to the pro-Rubio Conservatives Solution Fund and another $1 million to the anti-Trump Our Principles PAC. Asness is the founder of AQR Capital Management.

Trump began his campaign eschewing the super PACs that were helping his rivals  and vowing to self-fund his run for the White House.

“I am not controlled by my donors, special interests or lobbyists,” he said.

But in spring, a number of super PACs supporting Trump’s bid for the White House began cropping up.

World Wrestling Federation Founder Linda McMahon donated $6 million to one of them, Rebuilding America Now. That super PAC is run by Laurance Gay of East Canaan, an ally of former Trump campaign manager Paul Manafort, and has raised about $20 million.

McMahon, who had donated $550,000 to the pro-Christie American Leads PAC, also gave $200,000 to  the Future 45, another PAC supporting Trump. Future  45 is largely funded by Las Vegas casino magnate Sheldon Adelson and his wife Miriam.

McMahon told the Associated Press, that, while he was not her first choice for president, she is a strong Trump supporter today.

She said Trump is “a vessel that has housed this anger and this dissatisfaction” in the country, which she said has intensified since she first ran for office – against Richard Blumenthal for a seat in the U.S. Senate in 2010. McMahon also ran against Chris Murphy for the Senate in 2012.

McMahon also gave more than $300,000 to the Republican National Committee., $500,000 to the conservative super PAC End Spending Action Fund, and hundreds of thousands of dollars to super PACs supporting the candidacies of endangered Republican Senate candidates.

As far as the personal campaign accounts of the presidential candidates, which unlike super PACs have individual contribution limits of $2,700 per election, Clinton has outraised Trump handily. As of Sept. 30, Clinton had raised $6.6 million in the state and Trump about $634,000.

But dozens of Connecticut donors have given to a joint committee, the Trump Victory fund, that raised more than $86 million for the candidate’s campaign and the Republican National Committee. Not a super PAC, the fund has an individual contribution limit of $2,700 per election for Trump’s campaign and $33,400 for  a state Republican party, which send the money to the RNC. Connecticut’s Republican party is one of the 21 state parties affiliated with the Trump Victory fund.

About half of the $86 million raised by the committee went to the RNC. Much of that money was used to help “down ballot” GOP candidates.

Most Connecticut contributors to the fund gave amounts that were under the individual limit, but Robert Castrignano, principal in the Wall Street firm Sandler O’Neill + Partners, gave $100,000.

On Thursday, a top Trump campaign official said the candidate had held his last big-money fundraiser for the joint committee on Oct. 19,  inciting concerns in the GOP that there would not be enough money raised for last-minute get-out-the vote efforts.

While Trump-boosting super PACs have grown over the summer, Clinton has more support from this segment of the political money world.

A dozen different Clinton-supporting super PACs have raised over $200 million from October to May, while PACs backing Trump have raised less than half of that.

Dozens of Connecticut donors have given to that PAC, but none were megadonors contributing $1 million or more.

Still, Steven Mandel of Lone Star Capital and his wife Susan gave a total of $400,800 to the PAC; Donald Dwight Scott, head of GSO Capital Partners gave $50,000; and so did former Aetna executive Robyn Speak Walsh of Hartford.

And Clinton has raised millions of dollars from a small group of donors who “bundle” contributions. “Bundlers” are supporters who, after having reached the limit on contributions to a candidate’s primary campaign fund, turn to friends, associates and anyone else willing to give to that candidate.

The Trump campaign has not released a list of its bundlers.