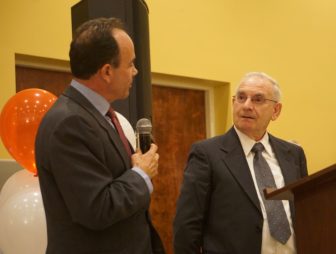 The mayor and the chairman, Joe Ganim and Mario Testa.

Bridgeport — Mario Testa leaned against the wall, arms crossed, and counted the room. He saw 250 men and women at a couple of dozen tables, not a bad turnout for what Testa called a last-minute, multi-purpose affair: a Democratic fundraiser and pre-election pep rally on the first anniversary of Joseph P. Ganim’s election as mayor.

“I’ll be honest with you,” said Testa, the host as the city’s Democratic chairman and owner of Testo’s Restaurant, the restaurant and catering hall where waiters were about to serve a family-style meal of pasta and salad. “There was no arm-twisting.”

The governor sent his regrets, but Lt. Gov. Nancy Wyman paid her respects, as did Attorney General George Jepsen, Comptroller Kevin Lembo and Nick Balletto, the Democratic state chairman. Sen. Edwin A. Gomes, one of two state senators whose careers Testa tried to terminate in primaries over the summer, mingled comfortably across the room.

“I was afraid we weren’t going to fill the room,” Ganim told the crowd.

With the exception of Balletto, they stayed away a year ago, when Ganim claimed victory in the same room. He was an ex-con five years removed from a seven-year term in prison for what prosecutors said was a methodical scheme during his first tenure as mayor to squeeze hundreds of thousands of dollars in bribes and kickbacks from city contractors.

It was a vindication for Testa, who’s never hidden his affection and hopes for Ganim, but awkward for Gov. Dannel P. Malloy and the rest of the state’s Democratic establishment. Testa seemed to enjoy the anniversary more than Ganim. Except for Malloy, they all came to acknowledge Ganim and the role Bridgeport plays in keeping Connecticut blue.

Bridgeport trails only New Haven in the number of votes produced for Democratic candidates. Barack Obama carried the city four years ago, 32,135 to 5,168 for Mitt Romney. Malloy carried the city two years ago in his re-election, 16,863 to 4,623 for Tom Foley.

“What you guys do is incredibly important,” Jepsen said. “Speaking as somebody who runs statewide, you have no idea how wonderful it is to know that Bridgeport is going to deliver. You guys do a plurality that exceeds the top five Republican towns in the state. And I thank you for it.”

Wyman said the party and the presidential campaign of Hillary Clinton needs the city to produce once again to keep Donald J. Trump from succeeding Obama in the White House.

“Thank you for coming back, Mr. Mayor,” Balletto said. “We’re very proud of you. You’re doing a great job.”

Balletto told the crowd that Trump was unfit for the White House, while Clinton was among the most experienced major party nominees ever to seek the presidency, even if she does struggle with an unfavorable rating on a par with Trump’s.

“We don’t have the most perfect candidate in the world,” Balletto said. “She’s made some mistakes. She says she’s sorry for these mistakes.” 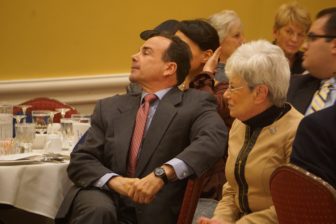 Ganim got through his first budget crisis in the spring, closing a $20 million deficit with the help of finding some one-time revenues, including $6 million from the sale of city land. He was a Clinton delegate to the Democratic National Convention in Philadelphia. Later in the summer, Malloy made a high-profile visit to the city, sitting with the mayor to address the state’s efforts to help Ganim’s police department quell a spate of shootings.

Ganim has not shied from issues guaranteed to highlight his criminal record. Prison re-entry programs have been a priority, one that recently generated a Wall Street Journal story with the headline, “A ‘Second Chance’ Mayor Looks to Give Others the Same Opportunity.”

The mayor describes his first year in office as breaching a wall that once seemed impenetrable, a reference not only to election, but to the growing sense of normalcy that attaches to his mayoralty.

He talks about people who have a habit of saying, “ ‘You can’t come back from that,’ whatever that is in your life,” Ganim said. “We know what it was for me.”

Earlier in the day, he held a press conference with Lembo, the comptroller who is weighing a run for governor in 2018, to publicize the city’s using a computer system Lembo introduced in Hartford to promote fiscal transparency. Bridgeport’s budget is now available on line in a searchable format.

Ganim says transparency is important, for the city and him.

“I got a parking ticket today, and it pissed me off. I shouldn’t have got it,” Ganim said. “Should I challenge it or should I pay it? I’m struggling with things like that.”

Testa, who once promoted Ganim for governor, getting him on the ticket as the nominee for lieutenant governor in 1994, said he sees no reason why Ganim couldn’t once again think of higher office. It is a topic the mayor does not entertain in depth, not one year into a four-year term.

On this evening, Ganim seemed happy to mark an unlikely anniversary.

“I’m pleased, certainly, always anxious to do more, but happy where we are,” he said.