Clinton carries CT but not the nation amid voter angst 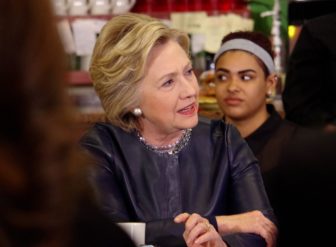 Hillary Clinton at the Orangeside restaurant in New Haven Saturday

While Connecticut voters backed Hillary Clinton in a losing effort against Donald J. Trump Tuesday, one of the most contentious presidential races in modern history polarized residents on both sides of the debate.

Clinton won Connecticut’s seven electoral votes by a comfortable margin, but the Democratic nominee underperformed in many crucial  battleground states compared with her party’s performance in 2012.

Connecticut voters turned out in numbers expected to approach 75 percent, but many reflected national polls showing they weren’t excited about either presidential contender, and – in some cases – repulsed by both.

‘Hold your nose and fill in the dot’

Dianne Grenier of Andover held her hands a foot apart to illustrate: It’s the size of her list of reasons not to vote for Clinton, the Democratic nominee. But she had a list just as long telling her not to vote for Trump, the GOP candidate.

“I felt neither one was even close to ideal,” said Grenier said, who nonetheless had ruled out voting for a third-party candidate as well as not voting at all.

So she did what she figures a lot of people did: “Hold your nose and fill in the dot.” She decided to vote for the first female president, despite her misgivings about Clinton.

“No matter who wins, I don’t think there’s going to be a lot of people happy,” she said. 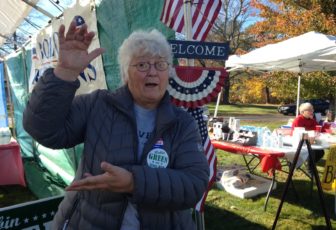 To Grenier, who retired after 40 years as an engineer at Pratt & Whitney, this election is reminiscent of the races Richard M. Nixon won in spite of the fact that few people ever admitted voting for him.

“Give us a year and see how many say they voted for whoever wins,” she said.

Nick Lestini of Plainville, an unaffiliated voter, said he made up his mind while thinking about his son, who serves in the military. “I don’t trust her (Clinton) to have his best interests at heart,” he said, explaining his support for Trump.

Paula Morra, wife of Bolton First Selectman Bob Morra, was predicting a Trump victory just before noon on Tuesday – a confidence bolstered by what she termed her addiction – Fox News.

Trump wasn’t her first choice. She didn’t like the negativity of the campaign and she didn’t approve of everything he did. But she felt he was better for the country than Hillary Clinton, who she said she had researched. “I have a problem with people who lie,” she said.

Bob Morra called Trump “the lesser of two evils.” But, he said, “I think Washington has no sense of reality of what America is all about.” In particular, he said, small businesses and the middle class have struggled over the past eight years.”

Candidates for federal and state offices also felt the voters’ angst when it came to the battle for the presidency.

In 20 years in politics, Lorraine Marchetti was never asked who she was voting for. Until this year.

During a forum at the senior center, it was the first question – which presidential candidate will you pick? Marchetti’s answer has been that she wasn’t sure who she would pick, that it’s a privilege to vote in privacy, and that she didn’t see how her vote in a presidential contest would affect how she would represent her constituents.

Her thought process: The person asking could be a Democrat trying to trip her up or a Republican who would call her out if she didn’t support the party’s nominee. And if not saying cost her a vote, there’s nothing she could do about it.

(Although Marchetti made up her mind by Tuesday, she said didn’t feel comfortable saying who she voted for.) 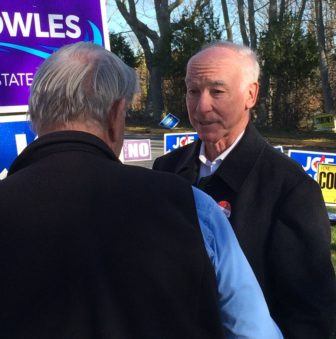 Courtney talks to Bill Spicer of Groton outside Fitch High School in Groton.

The 2nd District comprises most of eastern Connecticut, which has a larger share of unaffiliated voters than most other sections of the state. And Courtney said those voters were motivated to come out by “issues of security” but not just national security. “It’s also about jobs and the economy,” he said. “People just feel insecure.”

Courtney said he believes voters also feel insecure because of the political gridlock that has plagued Capitol Hill. “I think voters are asking, ‘How do we get some kind of normal process back in our democratic institutions?’”

Democratic U.S. Sen. Chris Murphy, who was not up for re-election Tuesday, had a read on voters’ moods that was similar to Courtney’s.

Murphy stopped by Rockville High School, where state House candidate Mike Winkler was greeting voters, at 3:30 Tuesday afternoon. He brought news of high turnout in Manchester – where he figures most of the voters are Democrats.

“The big question was would people’s disgust with the tone of the election turn into apathy or action?” Murphy told The Mirror while greeting voters wth state House candidate Mike Winkler outside of Rockville High School in Vernon.

Murphy’s impression was that the answer to that is action – in Connecticut and other states where he’s recently campaigned – New Hampshire, Ohio and Florida.

Though Connecticut turnout wasn’t expected to match the 78.1 percent mark achieved in the 2008 presidential race, Secretary of the State Denise Merrill projected Tuesday evening that turnout could approach the 75 percent mark.

By late Tuesday afternoon, with 118 towns reporting, the statewide average for turnout was 50 percent. And that didn’t take into account one of the heaviest voting periods, from 6 to 8 p.m., after the traditional work day has ended.

“This election has generated a lot of excitement and passion, which is what we’re seeing at the polls. It is still too early to tell what the final turnout numbers will be, however, it does look like they may be quite high.”

Merrill’s office also reported just before 9 p.m. that about 30,000 voters had registered on election day, easily surpassing the nearly 14,000 registered two years ago during the gubernatorial contest. This year marked the first time election day registration was implemented in a presidential year.

The New Haven Independent reported Tuesday evening that a “flood of last-minute registrants” were in City Hall waiting to sign up to cast a ballot, and that it appeared that 100 or more might not have been in time to register.

Ron Schurin, professor of political science at the University of Connecticut, said many Connecticut voters struggled with their decision in the presidential race.

He said one of his students, told him he was very conservative, but didn’t think he could vote for Trump. The student remained undecided until Tuesday afternoon, when a friend asked him “if a boat capsized and you could save only one, would you save Trump or Clinton?”

He decided he’d save Hillary and would vote for her.

Still, not all Connecticut voters were jaded about the choices for president.

Steven Dragon, an independent voter in Groton, said he was very supportive of Trump. “I feel he would take seriously the immigration problems that no one else will look to,” he said.

For Sarah Keenan of Essex, the reason to vote for Hillary Clinton was clear: “Because it’s the first woman president.”