Trump agenda clashes with that of CT lawmakers 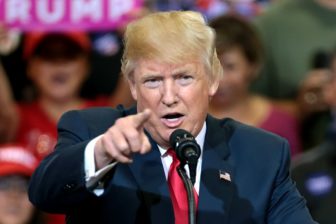 Donald Trump at an October rally in Phoenix

Washington – The day after Donald Trump’s stunning victory, Connecticut lawmakers said they would give the new president-elect a honeymoon period, but it may be short lived.

The plans Trump released during the campaign for his first 100 days in office are largely at odds with the all-Democratic Connecticut congressional delegation’s position and goals on a broad range of issues – from health care and immigration to food stamps and energy policy.

But since Connecticut’s lawmakers are in the minority in the Senate and House of Representatives, they can only play defense.

Right now, they are echoing the conciliatory remarks made by Hillary Clinton and President Obama, who said,  ”We have to remember that we’re actually all on one team.”

Democratic Sen. Richard Blumenthal, who won re-election handily on Tuesday, said, “As I go back to Washington, I believe more strongly than ever that we need to bring our country together, to bridge the divide and bridge partisan differences.”

But at a news conference in Hartford Wednesday, he also said, “I will stand for the core principles and convictions I believe in…fairness, respect, tolerance and justice.”

“I am going to give (Trump) a chance to lead, but obviously I’m vigorously opposed to his agenda,” Sen. Chris Murphy, D-Ct. told the Connecticut Mirror. “If anything is reckless, discriminatory or bad for Connecticut, I will be a part of blocking it.”

Trump’s “100-day action plan to Make America Great Again” is a laundry list of proposals the president-elect said he hopes to implement once he is sworn in in January.

Besides a tax reform plan that would cut rates across-the-board, including for the wealthy, Trump promised to appoint federal judges “who will uphold the Constitution” and “defend the Second Amendment,” and build a wall on the U.S. border with Mexico “to give unemployed Americans an opportunity to fill good paying jobs.”

Trump, who won nearly 42 percent of the vote in Connecticut, has also promised to repeal the North American Free Trade Agreement, or NAFTA, and pull the United States out of negotiations for a new Trans Pacific Partnership, or TPP – a proposed trade deal among 12 Pacific Rim nations.

Trump also wants to impose term limits on members of Congress and eliminate “with a stroke of a pen” dozens of executive orders Obama has signed that range from tightening gun restrictions to normalizing relations with Cuba.

“There is one common theme in all of these reforms,” Trump said. “It’s going to be America first.”

At the top of the Trump to-do list is the repeal of the Affordable Care Act.

But unless Republicans in Congress resort to special budget procedures known as “reconciliation” that let the majority party ram through fiscal changes, repeal of the ACA and other Trump initiatives are likely to falter in the Senate, where Connecticut’s senators could help block them.

While the GOP maintained control of the Senate, the party still lacks the 60-vote majority to  avoid Democratic filibusters. Murphy said Democrats may have picked up two seats in the Senate Tuesday night, strengthening the minority party’s hand. 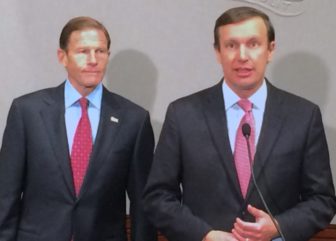 House Speaker Paul Ryan on Wednesday suggested Congress would seek to use reconciliation to repeal the Affordable Care Act. But at a Capitol Hill press conference later in the day, Senate Majority Leader Mitch McConnell would not commit to using the process to repeal the law.

As far as the ACA, Murphy said he is waiting to see what Trump will propose as an alternative.

“I’ve heard a lot about repealing and replacing the ACA,” he said. “Let’s see what the replacement is. I can’t support anything that would strip away coverage from people in Connecticut.”

Murphy said, however, he would consider anything Trump proposes that would “fix (the ACA) or make it better.”

Some agreements with Trump

Trump’s opposition to the TPP is shared by most of Connecticut’s lawmakers, especially Rep. Rosa DeLauro, D-3rd District, who says the trade pact would ship U.S. jobs overseas and weaken U.S. environmental and safety regulations. Trump’s plan to boost defense spending also may win support among Connecticut lawmakers, as may his plans to dramatically increase federal spending on infrastructure.

Trump has also promised to “cancel all federal funding to sanctuary cities,” jurisdictions like Hartford and New Haven, and for that matter the entire state of Connecticut, where police or other officials do not ask about a person’s immigration status, or don’t report all detained undocumented immigrants.

And besides the opposition he’ll face from Democrats, Trump will have to contend with members of his own party who either withheld their support or called on him to quit the race for the White House. That list includes about 15 Republican senators, along with dozens of current GOP House members and governors.

Rep. John Larson, D-1st District, said he hoped the GOP-controlled Congress will provide a counterweight to some of Trump’s more radical ideas. He said House Speaker Paul Ryan, R-Wis., and other GOP leaders have had misgivings about Trump.

“The legislature will have to have a heightened sense of responsibility,” Larson said. “The question is how we go forward.”

Larson said Trump “tapped into people’s anger” and led an insurgency against the status quo.

“Without a ground game it seems he has struck a nerve,” he said.

Larson also expressed the angst many have about Trump’s brashness and political inexperience.

“’What does it mean for our country? I can’t get my mind around it,” Larson said. ”It’s hard to believe you can insult your way to the presidency.”

Meanwhile, Blumenthal said it is incumbent on Democrats to “disagree in a civil and civilized way” with Trump.