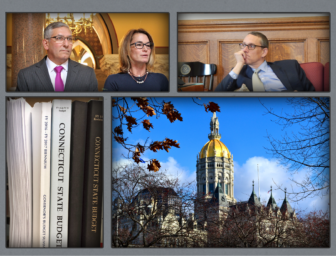 On paper, the Republican gains in the state legislature could increase pressure for a more conservative approach to Connecticut’s next budget.

But regardless of Democratic legislators’ strategy, there’s another force that will make it difficult for either party to rein in spending.

Connecticut’s debt costs, the product of decades of inadequate savings and a problem expected to plague state finances for at least another two decades, are projected to erupt in the first budget the new General Assembly must enact.

Senate Republican Leader Len Fasano of North Haven, touting three new seats the GOP gained Tuesday, predicted a Senate split evenly between 18 Democrats and 18 Republicans would approach the next budget very differently from the Democratic majorities of the past.

“This is going to cause a holistic review of the budget and not just in terms of priorities,” Fasano said, adding that Republicans would insist upon “frank discussions” about union contracts, labor costs, and new ways to operate government services more efficiently.

GOP legislators, who have steadfastly opposed tax hikes for most of their tenure in the minority, frequently charged Democrats with ignoring cost-cutting options that might upset special interest groups.

“I think there is going to be a shift on how we look at all of those types of issues, for the better of the state of Connecticut,” Fasano said.

But Adam Joseph, spokesman for the Senate Democratic Caucus, said, “The Republicans have always been involved in the (budget) process.” Republicans serve on the state’s two budget-writing committees and were invited to bipartisan budget negotiations with Gov. Dannel P. Malloy and legislative leaders last spring, Joseph said, adding that GOP leaders ultimately chose to leave those talks.

Republican leaders said last spring that Democrats refused to consider fixing the state’s constitutional spending cap, which has been stuck in legal limbo for the past year. They also charged Democrats with ignoring many of the GOP’s cost-cutting ideas.

Still, the budget cuts that were adopted last May don’t appear to have stabilized state finances over the long haul.

Malloy and the Democratic majority responded largely with cuts — and no tax hikes — to close that hole last May.

Since then, though, income and sales tax receipts haven’t met expectations, and efforts to cut labor costs through layoffs have progressed more slowly than anticipated.

The legislature’s nonpartisan Office of Fiscal Analysis last month estimated the General Fund was a modest $78 million in deficit.

More importantly, even if the current budget works out as planned, nonpartisan analysts say finances would run up an even larger deficit next year — $1.3 billion, or almost 7 percent — than the shortfall Malloy and Democratic legislators avoided last May. 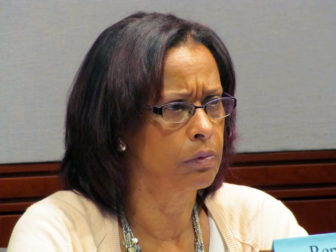 And a big chunk of next year’s projected, $1.3 billion deficit is tied to debt. Connecticut’s pension and other retirement benefit costs, along with payments on bonding, together are expected to climb $550 million or more next fiscal year, or about 12 percent.

In other words, anyone hoping to avoid raising taxes next year would have to make $550 million in offsetting spending cuts to other programs, since these debt costs are obligated contractually. And debt isn’t the only segment of the state budget with limited flexibility.

Medicaid, employee salaries and benefits and many costs associated with the Department of Children and Families are driven either by contract or federal mandate.

“The budget that we passed this year was pretty fiscally conservative,” said House Majority Leader Joe Aresimowicz, D-Berlin, his caucus’s choice to be House speaker next year. “It took into consideration a lot of labor savings, and we are still feeling the effects of it.”

Aresimowicz said it’s not impossible to balance another budget chiefly with cuts, “but it would be painful for almost every member of the House and Senate.”

A better alternative, he added, would be to make some strategic investments that help grow jobs, and ultimately bolster Connecticut’s economy.

Some advocates for social services, health care and education also have argued these contractually obligated debt costs, which are projected to worsen over the next two decades, are squeezing all other priorities out of the budget, and forcing unwise choices.

Walker, one of the legislature’s strongest advocates for anti-recidivism programs, said Connecticut’s investments in these areas in recent years have helped make it possible to close prisons and save in the Department of Correction budget in recent years.

“When we are cutting in one area, we are not necessarily helping in another,” she said.

Malloy said Wednesday that, “We came very close to having a truly bipartisan budget last year. It fell apart over relatively tiny things that shouldn’t have separated people.”

The governor also challenged all legislators to work cooperatively with him in the coming year.