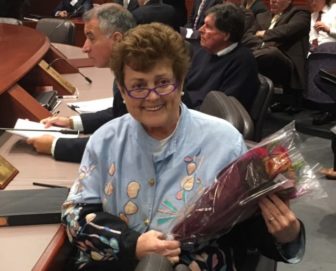 For nearly half of her 22-year legislative career, Rep. Betty Boukus of Plainville has played a key role in deciding which capital projects across Connecticut will receive state financing.

Tuesday Gov. Dannel P. Malloy and the State Bond Commission honored Boukus, who lost her re-election bid last week, as a tireless public servant who has assisted every corner of the state.

Malloy, who chairs the bond commission, frequently deferred to Boukus at past meetings as she interjected one final appeal for a project, or expressed her appreciation for the governor’s support.

Boukus is co-chair of the powerful bonding subcommittee of the Finance, Revenue and Bonding Committee and holds a non-voting seat on the bond commission. And the commission has final say over whether the state will borrow to fund most capital projects, including: school and transportation construction; state building maintenance; open space and farmland preservation; and smaller, community-based initiatives

“You tortured me, so we’re going to torture you,” Malloy jokingly told Boukus as he opened Tuesday’s commission meeting with a round of farewells to the Plainville lawmaker.

The governor issued a proclamation thanking Boukus and stating she “earned the deep respect and love of her colleagues on both sides of the aisle” by energetically working “to do what was best for the state of Connecticut.”

“Betty Boukus is a force of nature,” said Rep. Livvy Floren of Greenwich, ranking GOP representative on the bonding subcommittee. “She knows the process, she knows the people, and she knows how to get things done.”

Floren, whose role often requires that she and Boukus travel together all over Connecticut to research projects in line for state funding, said, “I felt as though we were ‘Thelma and Louise.’”

“Your career has made a difference in the lives of many, many people,” said Rep. Jeff Berger, D-Waterbury, co-chair of the finance committee.

When approached by anyone to consider a project’s worthiness for funding, “you never saw it as a Republican or a Democratic request,” Leone told Boukus. “You saw it as a request from someone whose community needed something.”

Boukus couldn’t always accommodate everyone’s appeal for funds, particularly in recent years as state finances have gotten tighter. Earlier this year she receive bipartisan praise and support for a plan to cancel nearly $1 billion in planned borrowing to keep state finances in compliance with a statutory bonding cap.

But regardless of whether she supported a funding request or not, “she did it with grace,” said Sen. John Fonfara, D-Hartford, the finance committee’s other co-chair. “We won’t forget that, Betty, or your commitment to the state of Connecticut.”

Department of Administrative Services Commissioner Melody Currey, a bond commission member and former state representative, called Boukus a mentor and praised her ability to look to the state’s needs, and not just those of her own district.

“Everybody calls you Betty because they know you so well,” Currey said, “but you are a representative” of the entire state.

The commissioner added that Boukus, despite her cooperative nature, was not careless with the state’s resources. “You asked the hard questions,” Currey said. “You fought back when it was necessary.”

Boukus, who choked back tears in addressing the commission, told the members, “I have absolutely loved working with you. … I love our state. I love going place to place and seeing what they got” by investing state funds.”

Though there were times she had to say ‘no’ to funding requests, Boukus said she tried to add, whenever possible,” “maybe we can work it out.”

She called her friendship with Floren “something I will treasure my entire life.”

Boukus praised Malloy as “a visionary. And visionaries sometimes aren’t recognized when their views differ from others.”