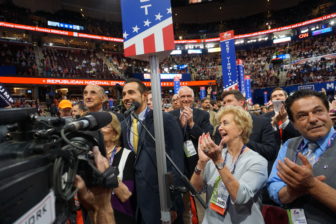 Washington – After the Trump transition team selects candidates for top jobs, it will turn its attention to thousands of other positions it must fill – including the entire West Wing staff – and Connecticut GOP Party Chairman J.R. Romano, and other state Republicans say they would not mind being in the mix.

“I want to focus on the job at hand, but if the opportunity does arise, I’d seriously consider it,” Romano said.

Romano, who headed the Connecticut delegation to the Republican National Convention this summer, has been a staunch Trump supporter.

He’s also a friend of Corey Lewandowski, Trump’s former campaign manager who is still an unofficial adviser to the president-elect. “I do know Corey very well,” Romano said.

Both Romano and Lewandoski worked for Americans for Prosperity, a political action committee largely funded by the Koch brothers. Romano, 37, a Trinity College graduate from Derby, was chosen to head the Connecticut Republican Party last year.

He said he’d “welcome the invitation” to join the Trump administration or discuss a position.

The Trump transition website, GreatAgain.gov, is soliciting resumes for 4,000 open positions, from cabinet secretaries and their deputies, to White House staff, civil service and policy roles.

Richard Foley, a former head of the state party, said just submitting a resume isn’t enough to win a job. Endorsements and proven loyalty are needed too, he said.

Foley said he began receiving calls from Connecticut Republicans interested in joining the Trump team hours after the election was called. But most are keeping their ambitions under wraps, he said.

“At this point people are being relatively discreet,” he said.

Foley said Ben Proto, an attorney in Stratford who was a Trump delegate and worked on the presidential campaigns of John McCain and Mitt Romney, “has earned his stripes.”

Proto said it would be his duty to serve any president who asked.

“If the administration called, I’d consider it very strongly,” he said.

Linda McMahon, co-founder of the World Wrestling Federation who donated $6 million to a pro-Trump PAC and hundreds of thousands more to efforts to elect Republican senators in tough races, is also a likely candidate, Foley said.

McMahon said she is not interested in an ambassadorship, a job often offered big donors, but hasn’t ruled out another job.