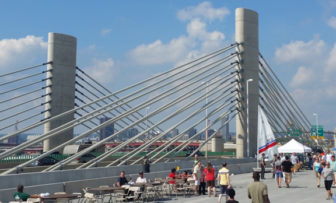 The Pearl Harbor Memorial Bridge, known as the Q bridge, over New Haven harbor. It was officially completed this month.

Washington – Connecticut’s senators on Monday joined a growing Democratic chorus of criticism for President-elect Donald Trump’s infrastructure plan, saying it is unrealistic and unworkable and would result in the building and repair of very few roads and bridges.

“There’s no ‘there there’ in the plan,” Sen. Chris Murphy said.

Sen. Richard Blumenthal called Trump’s proposal a “fantasy,” a “Trojan Horse” and a “road to nowhere.”

The plan was co-written by Wilbur Ross, a billionaire investor expected to be nominated as the next secretary of the Commerce Department.

Ross says the United States could spur $1 trillion in infrastructure spending by giving out about $137 billion in tax credits to private investors. Ross and plan co-writer Peter Navarro say the program would cost taxpayers nothing since increased construction would create new jobs and tax revenue.

The plan does not call for an increase in spending by the federal government, the prime source of funding for interstate highways and other big transportation projects, relying instead on private investment.

But Blumenthal and Murphy say there are few things these private investors will be willing to fund, because there are few roads, railways and bridges that can provide a return on that investment.

“In most infrastructure projects, there’s not a whole lot that would create revenue,” Murphy said.

He said Metro North would have to quadruple its fares to make investment in the commuter railroad attractive to investors. “And even if you put a toll on I-95, you wouldn’t generate enough money” to attract investors, Murphy said.

In their proposal, Ross and Navarro argue that public bonds, which are often used to raise money for local roads and bridges, have certain restrictions – including a timeline for the money to be spent – and are impractical for smaller projects.

“And construction costs tend to be higher when projects are built by the government rather than the private sector,” Ross and Navarro wrote.

Critics say investors may put money into electrical grid modernization or energy pipeline expansion, but those lucrative projects already may be planned or underway. There’s no requirement that the tax breaks be used for new projects or to expand existing ones.

Like Connecticut’s senators, other critics of Trump’s proposal say desperately needed infrastructure projects that are not attractive to private investors — municipal water-system overhauls, repairs of existing roads, replacement of bridges that do not charge tolls — would get no help.

Congressional Republicans also are wary of Trump’s infrastructure plan. Stephen Moore, a Trump adviser, is pushing the idea of covering the cost with the windfall from a one-time, 10 percent tax on corporate profits currently held overseas.

But some Republicans have other plans for the repatriation of tax money, including using it to offset the cost of proposed tax cuts in a comprehensive overhaul of the tax code they hope to push through Congress next year.

Other Republicans worry that consideration of Trump’s plan would open the door to a boost in federal spending, especially since Democrats like Murphy and Blumenthal will insist on it.

“I think we have a historic, unique moment of opportunity for a big, bold, bipartisan infrastructure program,” Blumenthal said. “But It has to involve new projects and new jobs.

Murphy said that “at some point (Trump) has to come to the realization that there has to be some public money.”

Some Democrats, including Blumenthal and Rep. Rosa DeLauro, D-3rd District, say the time is ripe for an infrastructure bank, a public-private enterprise that would provide loans and loan guarantees to projects, and issue special bonds to fund projects.

“According to a report from the Congressional Budget Office, in the last 25 years, there have been 36 privately financed road projects; of the 14 that have been completed, three declared bankruptcy and one needed a public buyout,” DeLauro said in a recent op-ed that ran in the Huffington Post. “This is not a track record that inspires confidence. Privatization will let down the millions of Americans who depend on our infrastructure each and every day.”

DeLauro wrote, “We need to pursue clear, comprehensive infrastructure policy that faces the reality of the problem.”

“We could do that by establishing a National Infrastructure Bank,” she said.