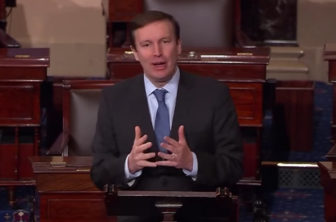 Sen. Chris Murphy speaking on the floor of the U.S. Senate.

Washington – Sen. Chris Murphy had a significant win Wednesday  as the Senate gave final approval to a bill that includes his legislation to overhaul the mental health system.

“For all the downsides about this job, this is one of those moments that keeps you coming back,” he said. “When people ask me, ‘How do you like the job,’ I always say, ‘You have to be able to see the bright, shining light among the dark forest.”

The 21st t Century Cures Act was approved by the Senate on a 94-5 vote and by the House last week in an equally lopsided bipartisan majority.

It authorizes the spending of $1 billion over two years to help states fight opioid addiction and to provide additional funding for cancer research.

“We are now one step closer to ending cancer as we know it, unlocking cures for diseases like Alzheimer’s, and helping people seeking treatment for opioid addiction finally get the help they need,” said President Obama, who is expected to soon sign the bill into law.

The legislation also adopts most of Murphy’s proposal to fight mental illness. It requires states to use at least 10 percent of their federal mental health grants to provide early intervention for psychosis and sets up a $5 million grant program to provide assertive community treatment, which helps people with serious mental illnesses like schizophrenia.

Another new grant would fund intensive early intervention for infants and young children who are at risk of developing or are showing signs of mental illness.

The bill also adopts Murphy’s provision to create a new senior position at the Department of Health and Human Services. The new assistant secretary for mental health and substance abuse would be responsible for overseeing grants and promoting best practices.

The legislation also would strengthen federal law regarding parity between insurance coverage of physical and mental health illness. “This is a breakthrough for people with mental illness,” Murphy said. “People are going to get better and get more care.”

“Today’s passage of the 21st Century Cures Act puts America’s money where its mouth is when it comes to public health,” said Sen. Richard Blumenthal. “Investment is key to saving lives, and this measure invests in critical initiatives that will make a real impact in the daily lives of people across Connecticut.”

“Both of us represent communities that have been devastated by opioid addiction and that don’t have the resources they need to deal with the crisis,” Courtney and Esty said in a joint statement.

But there was opposition to the popular bill by some Democrats, including Rep. Rosa DeLauro, D-2nd District, who called the  21st Century Cures Act a huge deregulatory giveaway to the pharmaceutical and medical device industry.

The legislation builds on Federal Drug Administration programs that allow a quicker regulatory pathway for medicines and medical technologies for patients with life-threatening or irreversibly debilitating diseases or conditions.

The legislation calls for the use of “data summaries” to support the approval of certain drugs for new indications, rather than full clinical trial data. The Cures Act also will allow drug companies to promote off-label uses to insurance companies.

Murphy said, “There are two sides to this story.”

“The drug industry will be making a little bit more money, but patients will get drugs faster and it will save lives,” he said.